The observatory and its former annex, the § Leiden Southern Station, are known for the discovery of 6,000 double stars and for Proxima Centauri, made by astronomer Robert Innes. At the observatory, 578 identifications of minor planet were made, a record number at the time. [1] The Minor Planet Center credits the observatory as the site where 147 minor planets were discovered by astronomers Harry Wood, Cyril Jackson, Hendrik van Gent, Ernest Johnson, Ejnar Hertzsprung, Jacobus Bruwer and Joseph Churms (see § List of discovered minor planets). [3]

The origins of the observatory began when Theodore Reunert of the South African Association for the Advancement of Science petitioned Alfred Milner Governor of the Transvaal Colony on 29 October 1902 for the establishment of a meteorological and astronomical observatory in Johannesburg. [4] :17 Assistant Colonial Secretary W.H. Moor agreed to the project on 17 December 1902 with the budget increased from £1,350 to £5,629 due to equipment changes. [4] :17

On 1 April 1903, a new Meteorological Department was temporarily established in Johannesburg. [4] :17 A location was sought for the new observatory and the Johannesburg Town Council made a decision on 12 May 1903, located within the municipal boundaries. [4] :17 The land of eight acres, on a ridge west of the Indian War Memorial, was on the northern boundary of the farm Doornfontein, presently part of the suburb Observatory and was given as a gift by the Bezuidenhout family, with a further two acres sold for £500. [4] :18 The land was given only for the use of science and a road, later called Observatory Avenue, was also to be built close to the site. [4] :18 The observatory building was built and the formal opening took place on 17 January 1905 by Governor Milner, but had no astronomical equipment. [4] :19

Well remembered for the quality of its Directors, work done on minor planets and the discovery of Proxima Centauri, growing light pollution problems in Johannesburg led to its closure in 1971–1972. The Observatory's buildings at 18a Gill Street, Observatory, Johannesburg, still exist. [1]

At that time the South African government decided to amalgamate all astronomical research into one body, which later became known as the South African Astronomical Observatory (SAAO); it has its headquarters in Cape Town and has Sutherland as its outstation. The main Cape telescopes were moved to Sutherland, and the Radcliffe Observatory at Pretoria was also dismantled. [1]

The main-belt asteroid 1585 Union, discovered by Ernest Johnson in 1947, was named for the Union observatory. [5]

The Leiden Southern Station ( 081 ) was a collaboration between the Dutch Leiden Observatory and Union Observatory. From 1938 to 1954 it was an annex to the Union Observatory, and was moved to Hartbeespoort in 1954 due to light pollution. It operated until 1978. [7]

The Minor Planet Center credits Union Observatory ("Johannesburg"), as the site of 147 minor planet discoveries, made by the following list of astronomers:

Alpha Centauri is a gravitationally bound system of the closest stars and exoplanets to Earth's Solar System at 4.37 light-years from the Sun. The name is Latinized from α Centauri, and abbreviated Alpha Cen or α Cen. It is a triple star system, consisting of the three stars: α Centauri A, α Centauri B, and the closest star α Centauri C.

Proxima Centauri is a small, low-mass star located 4.2465 light-years (1.3020 pc) away from the Sun in the southern constellation of Centaurus. Its Latin name means the "nearest [star] of Centaurus". This object was discovered in 1915 by Robert Innes and is the nearest-known star to the Sun. With a quiescent apparent magnitude 11.13, it is too faint to be seen with the unaided eye. Proxima Centauri is a member of the Alpha Centauri star system, being identified as component Alpha Centauri C, and is 2.18° to the southwest of the Alpha Centauri AB pair. It is currently 12,950 AU (0.2 ly) from AB, which it orbits with a period of about 550,000 years.

Ejnar Hertzsprung was a Danish chemist and astronomer born in Copenhagen. In the period 1911–1913, together with Henry Norris Russell, he developed the Hertzsprung–Russell diagram. 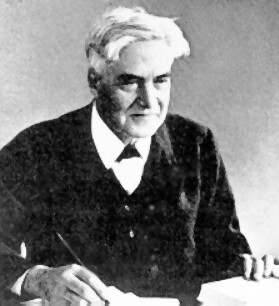 Robert Thorburn Ayton Innes FRSE FRAS was a Scottish astronomer best known for discovering Proxima Centauri in 1915, and numerous binary stars. He was also the first astronomer to have seen the Great January Comet of 1910, on 12 January. He was the founding director of a meteorological observatory in Johannesburg, which was later converted to an astronomical observatory and renamed to Union Observatory. He was the first Union Astronomer. Innes House, designed by Herbert Baker, built as his residence at the observatory, today houses the South African Institute of Electrical Engineers.

Ernest Leonard Johnson (1891–1977) was a South African astronomer and a former staff member of the Union Observatory in Johannesburg, South Africa. He is known for the discovery of 18 asteroids between 1946–1951, as well as several comets. On 25 August 1949, he discovered 48P/Johnson, a periodic comet expected to pass no closer than 1.2 to 1.3 AU from our planet in 2025. Johnson received the "Donohoe Comet Medal" twice before retiring in 1956. He died in 1977.

Harry Edwin Wood was an English astronomer, director of the Union Observatory in Johannesburg, and discoverer of minor planets.

Leiden Observatory is an astronomical institute of Leiden University, in the Netherlands. Established in 1633 to house the quadrant of Rudolph Snellius, it is the oldest operating university observatory in the world, with the only older still existing observatory being the Vatican Observatory. 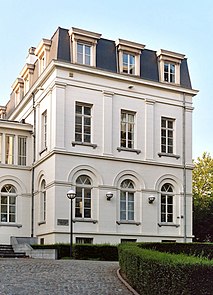 1267 Geertruida, provisional designation 1930 HD, is a carbonaceous background asteroid from the inner regions of the asteroid belt, approximately 20 kilometers in diameter. Discovered by astronomer Hendrik van Gent at Johannesburg Observatory in 1930, the asteroid was later named after Geertruid Pels, sister of Dutch astronomer Gerrit Pels.

1693 Hertzsprung is a dark and elongated background asteroid from the middle region of the asteroid belt, approximately 39 kilometers in diameter. It was discovered on 5 May 1935, by Dutch astronomer Hendrik van Gent at the Leiden Southern Station, annex to the Johannesburg Observatory in South Africa.

1658 Innes, provisional designation 1953 NA, is a rare-type asteroid from the middle region of the asteroid belt, approximately 15 kilometers in diameter. It was named after Robert T. A. Innes.

1607 Mavis, provisional designation 1950 RA, is a stony asteroid from the central region of the asteroid belt, approximately 12 kilometers in diameter. It was discovered on 3 September 1950, by South African astronomer Ernest Johnson at Johannesburg Observatory in South Africa. It was later named after the wife of astronomer Jacobus Bruwer.

1585 Union, provisional designation 1947 RG, is a dark background asteroid from the outer regions of the asteroid belt, approximately 52 kilometers in diameter. It was discovered on 7 September 1947, by South African astronomer Ernest Johnson at the Union Observatory in Johannesburg, South Africa. The asteroid was named after the discovering observatory.

1660 Wood, provisional designation 1953 GA, is a stony Phocaea asteroid from the inner regions of the asteroid belt, approximately 12 kilometers in diameter. It was named after British–South African astronomer Harry Edwin Wood.

1925 Franklin-Adams is a stony background asteroid from the central regions of the asteroid belt, approximately 8.9 kilometers in diameter. It was discovered on 9 September 1934, by Dutch astronomer Hendrik van Gent at the Leiden Southern Station, annex to the Johannesburg Observatory in South Africa. The bright asteroid has a short rotation period of less than 3 hours. It was named after British amateur astronomer John Franklin Adams (1843–1912). 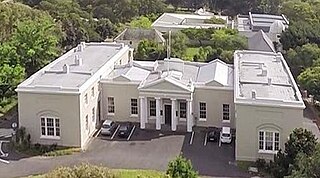 The Royal Observatory, Cape of Good Hope, is the oldest continuously existing scientific institution in South Africa. Founded by the British Board of Longitude in 1820, it now forms the headquarters building of the South African Astronomical Observatory.

Innes' star is an M3.5-type red dwarf, located in constellation Carina. It has around 35% of the mass of the Sun, yet only 1.1% of its luminosity, and an estimated surface temperature of 3,323 K.

Adriaan Jan Wesselink (1909–1995) was a Dutch astronomer who worked successively in the Netherlands, South Africa and the United States. He specialised in observing and understanding the characteristics of stars, particularly variable stars.