The Torah Academy is a Chabad Jewish day school in Johannesburg, South Africa. It comprises a Boys' High School, a Girls' High School (on a separate campus), a Primary School and a Nursery School. The Mission of the school is to "provide and promote the highest quality Jewish and general education to a diverse community of Jewish children... [and] to cultivate students to reach personal excellence, and to be responsible members of society." Although the school is Chassidic Orthodox, families of all levels of observance are welcomed.

The main campus, purchased in 1980, comprises a stone building with stained glass windows on approximately 11 acres (45,000 m2) of lawns and gardens, playing fields, including netball, basketball and soccer fields, recreational facilities, classrooms, a computer/media centre, science laboratory, and a pre-school department. On campus there is also "Lubavitch House", which contains the offices of the dean and administrator, with boardrooms, a printing room, and a dining room and kitchen. The Torah Academy Shul , serving the (Chabad) community in that area of Johannesburg, is also on campus. 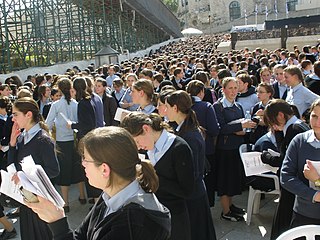 Bais Yaakov is a genericized name for full-time ultra-Orthodox Jewish elementary and secondary schools for Jewish girls throughout the world.

The history of Jews in South Africa mainly began under the British Empire, following a general pattern of increased European settlement in the 19th century. The early patterns of Jewish South African history are almost identical to the history of the Jews in the United States but on a much smaller scale, including the period of early discovery and settlement from the late 17th century to the early 19th century. The community grew tenfold between 1880 and 1914, from 4,000 to over 40,000.

Tomchei Tmimim is the central Yeshiva of the Chabad-Lubavitch Hasidic movement. Founded in 1897 in the town of Lubavitch by Rabbi Sholom Dovber Schneersohn, it is now a worldwide network of institutions of advanced Torah study, the United Lubavitcher Yeshivoth. 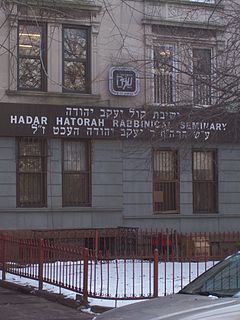 Hadar Hatorah is a Chabad men's yeshiva in Brooklyn, New York. It is the world's first yeshiva for baalei teshuva.

Kesser Torah College is an independent Chabad Ultra Orthodox co-educational early learning, primary and secondary day school, located in Dover Heights, an eastern suburb of Sydney, New South Wales, Australia. The college provides education from preschool through Kindergarten to Year 12. Kesser Torah was incorporated in December 2003 and has grown to accommodate over 480 students catering to over 250 families.

A Jewish day school is a modern Jewish educational institution that is designed to provide children of Jewish parents with both a Jewish and a secular education in one school on a full-time basis. The term "day school" is used to differentiate schools attended during the day from parttime weekend schools as well as secular or religious "boarding school" equivalents where the students live full-time as well as study. The substance of the "Jewish" component varies from school to school, community to community, and usually depends on the Jewish denominations of the schools' founders. While some schools may stress Judaism and Torah study others may focus more on Jewish history, Hebrew language, Yiddish language, secular Jewish culture, and Zionism.

Oholei Torah, is the common name of the Lubavitch schools Educational Institute Oholei Menachem and Talmudical Seminary Oholei Torah. The main branches of the school and its administrative offices are located in Brooklyn, New York City.

Merkos L'Inyonei Chinuch is the central educational arm of the Chabad-Lubavitch movement. It was founded in 1943 by the sixth Rebbe, Rabbi Yosef Yitzchok Schneersohn, who appointed his son-in-law, Rabbi Menachem Mendel Schneerson, who would later become the seventh Rebbe, as its chairman and director. Today, Rabbi Chaim Yehuda Krinsky serves as chairman and Rabbi Moshe Kotlarsky serves as vice-chairman.

Rabbi Shimon Lazaroff is the current Texas Regional Director for Texas Friends of Chabad Lubavitch, Inc. and member of the board and executive committee of Agudas Chasidei Chabad. With the direction of the Lubavitch Rebbe, Rabbi Menachem Mendel Schneerson, he established Chabad Lubavitch in Texas upon his arrival with his family in 1972.

Torah Day School of Houston is a Jewish Day School in Houston established in 1977 by the Texas Regional Headquarters of the Chabad Lubavitch. It offers a Jewish education to grades K-8 in addition to its Early Childhood Center for children ages eighteen months through four years old.

The Rabbinical College of Pretoria is a Chabad Yeshiva in Pretoria, South Africa. It was established in 2001 under the inspiration of late Chief Rabbi Cyril Harris. The Yeshiva was originally headed by Rabbi Levi Wineberg, also joint Rosh Kollel of Kollel Bet Mordechai in Johannesburg, and internationally known for his annotated translation of the Tanya. It is now under Rabbis Chaim Finkelstein and Gidon Fox, with Rabbi Yosef Kesseleman as Mashpia.

The Lubavitch Yeshiva Gedolah of Johannesburg is a Chabad Yeshiva based in Glenhazel, Johannesburg. It was established by the Lubavitcher Rebbe in 1983, and is headed by Rabbi Noam Wagner, with Rabbi Y. Kesselman as Mashpia.

Bais Chana Women International is a Chabad non-profit organization that works to provide an environment for Jewish girls and women, ages 15 and up and from all backgrounds, to explore Jewish teachings and traditions.

Lubavitch Senior Girls' School is a Jewish secondary school and sixth form for girls, located in the Stamford Hill area of the London Borough of Hackney in England. The schools is guided by the principles of the Chabad-Lubavitch movement.

Rav Teitz Mesivta Academy, commonly known as RTMA or JEC High School, is a Yeshiva high school located in Elizabeth, New Jersey and a branch of the Jewish Educational Center. Founded in 1955 by Rabbi Pinchas Mordechai Teitz, RTMA adheres to the tenets and practices of Orthodox Judaism. It is one of the country's earliest and leading Modern Orthodox Yeshiva high schools. RTMA's dual curriculum offers courses in Torah studies, as well as college preparatory academics. Most of its students reside in the Orthodox Jewish communities of New Jersey and New York.