Last updated January 09, 2021
This article is about maize, beans, and squash. For the variety of tomato, see Three Sisters tomato.

The Three Sisters are the three main agricultural crops of various indigenous groups in North America: winter squash, maize (corn), and climbing beans (typically tepary beans or common beans). Originating in Mesoamerica, these three crops were carried northward, up the river valleys over generations, far afield to the Mandan and Iroquois who, among others, used these "Three Sisters" for food and trade.

In a technique known as companion planting the three crops are planted close together. Flat-topped mounds of soil are built for each cluster of crops. [1] Each mound is about 30 cm (12 in) high and 50 cm (20 in) wide, and several maize seeds are planted close together in the center of each mound. In parts of the Atlantic Northeast, rotten fish or eels are buried in the mound with the maize seeds, to act as additional fertilizer where the soil is poor. [2] When the maize is 15 cm (6 inches) tall, beans and squash are planted around the maize, alternating between the two kinds of seeds. The process to develop this agricultural knowledge took place over 5,000–6,500 years. Squash was domesticated first, with maize second and then beans being domesticated. [3] [4] Squash was first domesticated 8,000–10,000 years ago. [5] [6]

The three crops benefit from each other. [7] The maize provides a structure for the beans to climb, eliminating the need for poles. The beans provide the nitrogen to the soil that the other plants use, and the squash spreads along the ground, blocking the sunlight, helping prevent the establishment of weeds. The squash leaves also act as a "living mulch", creating a microclimate to retain moisture in the soil, and the prickly hairs of the vine deter pests. Corn, beans, and squash contain complex carbohydrates, essential fatty acids and all nine essential amino acids.

Native Americans throughout North America are known for growing variations of Three Sisters gardens. [8] The milpas of Mesoamerica are farms or gardens that employ companion planting on a larger scale. [9] The Ancestral Puebloans are known for adopting this garden design in a drier environment. The Tewa and other peoples of the North American Southwest often included a "fourth Sister", Rocky Mountain bee plant ( Cleome serrulata ), which attracts bees to help pollinate the beans and squash. [10]

The Three Sisters planting method is featured on the reverse of the 2009 US Sacagawea dollar. [11]

Corn, squash and beans were planted ca. 800 AD in the largest Native American city north of the Rio Grande known as Cahokia, in what is now known as the US state of Illinois, across the river from St Louis, Missouri. The Three Sisters crops were responsible for the surplus food that created an expanded population throughout the extended Mississippi River valley and tributaries, creating the Mississippian and Mvskoke cultures that flourished from ca. 800 ce to ca. 1600 when physical contact with Spanish explorers brought Eurasian diseases, death, and cultural collapse.

Among the Iroquois or Haudenosaunee, notably the Seneca, women were responsible for crop cultivation, including the 'Three Sisters'. Men had more cause to travel for extended periods of time, such as for hunting expeditions, diplomatic missions or the tribe's numerous wars with nearby rivals. However, men took part in the initial preparation for the planting of the 'Three Sisters' by clearing the planting ground. After a sufficient area of soil was prepared, groups of women (related to each other) took on all the planting, weeding, and harvesting. [12]

The Maya diet focused on three domesticated staple crops: maize, squash, and beans (typically Phaseolus vulgaris ). Among the three, maize was the central component of the diet of the ancient Maya and figured prominently in Maya mythology and ideology. Archaeological evidence suggests that Chapalote-Nal-Tel was the dominant maize species; however, it is likely others were being exploited also. [13] Maize was used and eaten in a variety of ways, but was always nixtamalized. 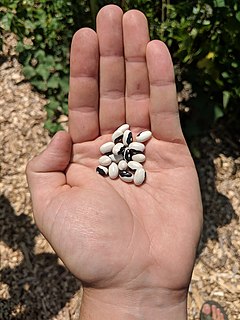 A bean is the seed of one of several genera of the flowering plant family Fabaceae, which are used as vegetables for human or animal food. They can be cooked in many different ways, including boiling, frying, and baking, and are used in many traditional dishes throughout the world.

Vegetable farming is the growing of vegetables for human consumption. The practice probably started in several parts of the world over ten thousand years ago, with families growing vegetables for their own consumption or to trade locally. At first manual labour was used but in time livestock were domesticated and the ground could be turned by the plough. More recently, mechanisation has revolutionised vegetable farming with nearly all processes being able to be performed by machine. Specialist producers grow the particular crops that do well in their locality. New methods—such as aquaponics, raised beds and cultivation under glass—are used. Marketing can be done locally in farmer's markets, traditional markets or pick-your-own operations, or farmers can contract their whole crops to wholesalers, canners or retailers. 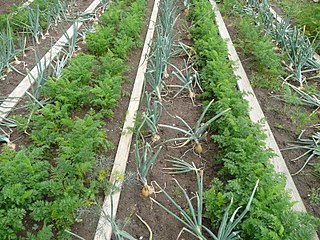 Milpa is a crop-growing system used throughout Mesoamerica. It has been most extensively described in the Yucatán peninsula area of Mexico. The word milpa is derived from the Nahuatl word phrase mil-pa, which translates into "cultivated field." Though different interpretations are given to it, it usually refers to a cropping field. Based on the ancient agricultural methods of Maya peoples and other Mesoamerican people, milpa agriculture produces maize, beans, and squash. The milpa cycle calls for 2 years of cultivation and eight years of letting the area lie fallow. Agronomists point out that the system is designed to create relatively large yields of food crops without the use of artificial pesticides or fertilizers, and they point out that while it is self-sustaining at current levels of consumption, there is a danger that at more intensive levels of cultivation the milpa system can become unsustainable.

Phaseolus is a genus of herbaceous to woody annual and perennial vines in the family Fabaceae containing about 70 plant species, all native to the Americas, primarily Mesoamerica.

Agriculture in Mesoamerica dates to the Archaic period of Mesoamerican chronology. At the beginning of the Archaic period, the Early Hunters of the late Pleistocene era led nomadic lifestyles, relying on hunting and gathering for sustenance. However, the nomadic lifestyle that dominated the late Pleistocene and the early Archaic slowly transitioned into a more sedentary lifestyle as the hunter gatherer micro-bands in the region began to cultivate wild plants. The cultivation of these plants provided security to the Mesoamericans, allowing them to increase surplus of "starvation foods" near seasonal camps; this surplus could be utilized when hunting was bad, during times of drought, and when resources were low. The cultivation of plants could have been started purposefully, or by accident. The former could have been done by bringing a wild plant closer to a camp site, or to a frequented area, so it was easier access and collect. The latter could have happened as certain plant seeds were eaten and not fully digested, causing these plants to grow wherever human habitation would take them.

Phaseolus acutifolius, or the Tepary bean, is a legume native to the southwestern United States and Mexico and has been grown there by the native peoples since pre-Columbian times. It is more drought-resistant than the common bean and is grown in desert and semi-desert conditions from Arizona through Mexico to Costa Rica. The waters requirements are low and the crop will grow in areas where annual rainfall is less than 400 mm (16 in).

Phaseolus vulgaris, also known as the common bean and French bean, is a herbaceous annual plant grown worldwide for its edible dry seeds or unripe fruit. The main categories of common beans, on the basis of use, are dry beans, snap beans and shell (shelled) beans. Its leaf is also occasionally used as a vegetable and the straw as fodder. Its botanical classification, along with other Phaseolus species, is as a member of the legume family Fabaceae. Like most members of this family, common beans acquire the nitrogen they require through an association with rhizobia, which are nitrogen-fixing bacteria. 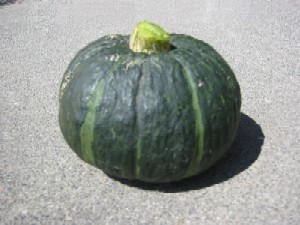 Kabocha is a type of winter squash, a Japanese variety of the species Cucurbita maxima. It is also called kabocha squash or Japanese pumpkin in North America. In Japan, "kabocha" may refer to either this squash, to the Western pumpkin, or indeed to other squashes. 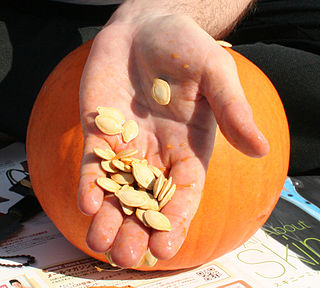 A pumpkin seed, also known in North America as a pepita, is the edible seed of a pumpkin or certain other cultivars of squash. The seeds are typically flat and asymmetrically oval, have a white outer husk, and are light green in color after the husk is removed. Some cultivars are huskless, and are grown only for their edible seed. The seeds are nutrient- and calorie-rich, with especially high content of fat, protein, dietary fiber, and numerous micronutrients. Pumpkin seed can refer either to the hulled kernel or unhulled whole seed, and most commonly refers to the roasted end product used as a snack. 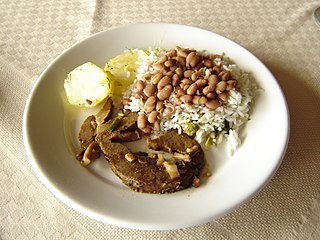 Rice and beans is a type of dish made from a combination of staple foods in many cultures around the world. The grain and legume combination provides several important nutrients and many calories, and both foods are widely available. Rice and beans are vegan and, together, make up a complete protein. The beans are usually seasoned, while the rice may be plain or seasoned. The two components may be combined or served separately.

Domesticated plants of Mesoamerica, established by agricultural developments and practices over several thousand years of pre-Columbian history, include maize and capsicum. A list of Mesoamerican cultivars and staples: 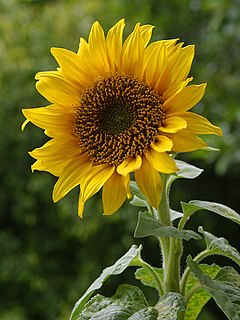 The Eastern Agricultural Complex was one of about 10 independent centers of plant domestication in the pre-historic world. By about 1800 BCE the Native Americans of North America were cultivating several species of plants, thus transitioning from a hunter-gatherer economy to agriculture. After 200 BCE when maize from Mexico was introduced to the Eastern Woodlands, the Native Americans of the present-day United States and Canada slowly changed from growing local indigenous plants to a maize-based agricultural economy. The cultivation of local indigenous plants other than squash declined and was eventually abandoned. The formerly domesticated plants, except for squash, returned to their wild forms. 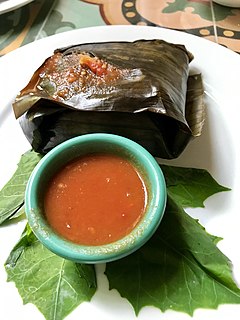 Ancient Maya cuisine was varied and extensive. Many different types of resources were consumed, including maritime, flora, and faunal material, and food was obtained or produced through strategies such as hunting, foraging, and large-scale agricultural production. Plant domestication concentrated upon several core foods, the most important of which was maize.

Agriculture on the prehistoric Great Plains describes the agriculture of the Indian peoples of the Great Plains of the United States and southern Canada in the Pre-Columbian era and before extensive contact with European explorers, which in most areas occurred by 1750. The principal crops grown by Indian farmers were maize (corn), beans, and squash, including pumpkins. Sunflowers, goosefoot, tobacco, gourds, and plums, were also grown. 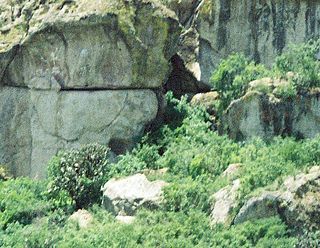 The Archaic period, also known as the preceramic period, is a period in Mesoamerican chronology that begins around 8000 BCE and ends around 2000 BCE and is generally divided into Early, Middle, and Late Archaic periods. The period is preceded by the Paleoindian period and followed by the Preclassic period. Scholars have found it difficult to determine exactly when the Paleoindian period ends and the Archaic begins, but it is generally linked with changing climate associated with the transition from the Pleistocene to the Holocene epochs, and absence of extinct Pleistocene animals. It is also generally unclear when the Archaic period ends and the Preclassic period begins, though the appearance of pottery, large-scale agriculture, and villages signal the transition.