In the classification of the archaeological cultures of North America, the Archaic period in North America, taken to last from around 8000 to 1000 BC [1] [ citation needed ] in the sequence of North American pre-Columbian cultural stages, is a period defined by the archaic stage of cultural development. The Archaic stage is characterized by subsistence economies supported through the exploitation of nuts, seeds, and shellfish. [2] As its ending is defined by the adoption of sedentary farming, this date can vary significantly across the Americas.

The rest of the Americas also have an Archaic Period. [2]

This classification system was first proposed by Gordon Willey and Philip Phillips in the widely accepted 1958 book Method and Theory in American Archaeology.

In the organization of the system, the Archaic period followed the Lithic stage and is superseded by the Formative stage. [3]

Numerous local variations have been identified within the cultural rankings. The period has been subdivided by region and then time. For instance, the Archaic Southwest tradition is subdivided into the Dieguito-Pinto, Oshara, Cochise and Chihuahua cultures. [4]

Since the 1990s, secure dating of multiple Middle Archaic sites in northern Louisiana, Mississippi and Florida has challenged traditional models of development. In these areas, hunter-gatherer societies in the Lower Mississippi Valley organized to build monumental earthwork mound complexes as early as 3500 BC (confirmed at Watson Brake), with building continuing over a period of 500 years. Such early mound sites as Frenchman's Bend and Hedgepeth were of this time period; all were constructed by localized societies. Watson Brake is now considered to be the oldest mound complex in the Americas. [5] It precedes that built at Poverty Point by nearly 2,000 years (both are in northern Louisiana). More than 100 sites have been identified as associated with the regional Poverty Point culture of the Late Archaic period, and it was part of a regional trading network across the Southeast.

Across the Southeastern Woodlands, starting around 4000 BC, people exploited wetland resources, creating large shell middens. Middens developed where the people lived along rivers, but there is limited evidence of Archaic peoples along the coastlines prior to 3000 BC. Archaic sites on the coast may have been inundated by rising sea levels (one site in 15 to 20 feet of water off St. Lucie County, Florida, has been dated to 2800 BC). Starting around 3000 BC, evidence of large-scale exploitation of oysters appears. During the period 3000 BC to 1000 BC, shell rings, large shell middens that more or less surround open centers, were developed along the coast. These shell rings are numerous in South Carolina and Georgia, but are also found scattered around the Florida Peninsula and along the Gulf of Mexico coast as far west as the Pearl River. In some places, such as Horr's Island in Southwest Florida, resources were rich enough to support sizable mound-building communities year-round. Four shell or sand mounds on Horr's Island have been dated to between 4,870 and 4,270 Before Present (BP). [6] [7]

The Chalcolithic, a name derived from the Greek: χαλκός khalkós, "copper" and from λίθος líthos, "stone" or Copper Age, also known as the Eneolithic or Aeneolithic is an archaeological period which researchers usually regard as part of the broader Neolithic. In the context of Eastern Europe, archaeologists often prefer the term "Eneolithic" to "Chalcolithic" or other alternatives.

Events from the BCs in Canada.

Native American pottery is an art form with at least a 7500-year history in the Americas. Pottery is fired ceramics with clay as a component. Ceramics are used for utilitarian cooking vessels, serving and storage vessels, pipes, funerary urns, censers, musical instruments, ceremonial items, masks, toys, sculptures, and a myriad of other art forms.

In the sequence of cultural stages first proposed for the archaeology of the Americas by Gordon Willey and Philip Phillips in 1958, the Lithic stage was the earliest period of human occupation in the Americas, as post-glacial hunters and collectors spread through the Americas. The stage derived its name from the first appearance of Lithic flaked stone tools. The term Paleo-Indian is an alternative, generally indicating much the same period.

In the classification of archaeological cultures of North America, the Woodland period of North American pre-Columbian cultures spanned a period from roughly 1000 BCE to European contact in the eastern part of North America, with some archaeologists distinguishing the Mississippian period, from 1000 CE to European contact as a separate period. The term "Woodland Period" was introduced in the 1930s as a generic term for prehistoric sites falling between the Archaic hunter-gatherers and the agriculturalist Mississippian cultures. The Eastern Woodlands cultural region covers what is now eastern Canada south of the Subarctic region, the Eastern United States, along to the Gulf of Mexico.

Several chronologies in the archaeology of the Americas include a Formative Period or Formative stage etc. It is often sub-divided, for example into "Early", "Middle" and "Late" stages.

The Belle Glade culture, or Okeechobee culture, is an archaeological culture that existed from as early as 1000 BCE until about 1700 CE in the area surrounding Lake Okeechobee and in the Kissimmee River valley in the Florida Peninsula.

The Caloosahatchee culture is an archaeological culture on the Gulf coast of Southwest Florida that lasted from about 500 to 1750 AD. Its territory consisted of the coast from Estero Bay to Charlotte Harbor and inland about halfway to Lake Okeechobee, approximately covering what are now Charlotte and Lee counties. At the time of first European contact, the Caloosahatchee culture region formed the core of the Calusa domain. 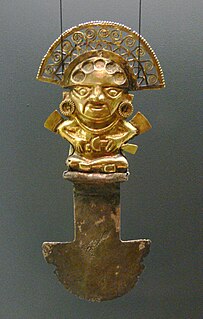 Metallurgy in pre-Columbian America is the extraction, purification and alloying of metals and metal crafting by Indigenous peoples of the Americas prior to European contact in the late 15th century. Indigenous Americans have been using native metals from ancient times, with recent finds of gold artifacts in the Andean region dated to 2155–1936 BCE, and North American copper finds dated to approximately 5000 BCE. The metal would have been found in nature without need for smelting techniques and shaped into the desired form using heat and cold hammering techniques without chemically altering it by alloying it. To date "no one has found evidence that points to the use of melting, smelting and casting in prehistoric eastern North America." In South America the case is quite different. Indigenous South Americans had full metallurgy with smelting and various metals being purposely alloyed. Metallurgy in Mesoamerica and Western Mexico may have developed following contact with South America through Ecuadorian marine traders. 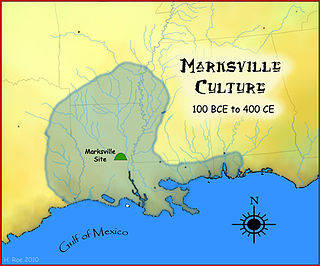 The Marksville culture was an archaeological culture in the lower Lower Mississippi valley, Yazoo valley, and Tensas valley areas of present-day Louisiana, Mississippi, Missouri, Arkansas, and extended eastward along the Gulf Coast to the Mobile Bay area, from 100 BCE to 400 CE. This culture takes its name from the Marksville Prehistoric Indian Site in Avoyelles Parish, Louisiana. Marksville Culture was contemporaneous with the Hopewell cultures within present-day Ohio and Illinois. It evolved from the earlier Tchefuncte culture and into the Baytown and Troyville cultures, and later the Coles Creek and Plum Bayou cultures. It is considered ancestral to the historic Natchez and Taensa peoples.

Long-nosed god maskettes are artifacts made from bone, copper and marine shells associated with the Mississippian culture and found in archaeological sites in the American Midwest and Southeast. They are small shield-shaped faces with squared-off foreheads, circular eyes, and large noses of various lengths. They are often shown on Southeastern Ceremonial Complex representations of falcon impersonators as ear ornaments. Long and short nosed versions of the masks have been found in ten different states, with the majority found at sites in Illinois. Many archaeologists now associate them with the Ho-Chunk (Winnebago) stories of the mythological being Red Horn.

Poverty Point State Historical Site is a prehistoric earthwork constructed by the Poverty Point culture. The Poverty Point site is located in present-day northeastern Louisiana though evidence of the Poverty Point culture extends throughout much of the Southeastern Woodlands. The culture extended 100 miles (160 km) across the Mississippi Delta and south to the Gulf Coast. The Poverty Point site has been designated as a U.S. National Monument, a U.S. National Historic Landmark, and UNESCO World Heritage Site. Located in the Southern United States, the site is 15.5 miles (24.9 km) from the current flow of the Mississippi River, and is situated on the edge of Macon Ridge, near the village of Epps in West Carroll Parish, Louisiana.

Shell rings are archaeological sites with curved shell middens completely or partially surrounding a clear space. The rings were sited next to estuaries that supported large populations of shellfish, usually oysters. Shell rings have been reported in several countries, including Colombia, Peru, Japan, and the southeastern United States. Archaeologists continue to debate the origins and use of shell rings.

Several chronologies in the archaeology of the Americas include an Archaic Period or Archaic stage etc. It is often sub-divided, for example into "Early", "Middle" and "Late", or alternatively "Lower" and "Upper", stages. The dates, and the characteristics of the period called "Archaic" vary between different parts of the Americas. Sometimes also referred to as the "Pre-Ceramic stage" or period, it followed the Lithic stage and was superseded by the Formative stage, or a Preformative stage. The typical broad use of the terms is as follows:

Cayo Pelau Archaeological Site is a multi-period aboriginal archaeological site in Charlotte Harbor on the west peninsular Gulf coast of the United States. The island is 3.5 miles directly south of the Big Mound Key-Boggess Ridge Archeological District. It is the only site that lies within two counties, Lee County in the south and Charlotte County, Florida to the north. Neither county has taken responsibility for identifying, protecting or preserving the prehistoric and historical cultural resources on the island.