Hurricane Mitch is the second-deadliest Atlantic hurricane on record, causing over 11,000 fatalities in Central America in 1998, including approximately 7,000 in Honduras and 3,800 in Nicaragua due to catastrophic flooding from the slow motion of the storm. It was the deadliest hurricane in Central American history, surpassing Hurricane Fifi–Orlene, which killed slightly fewer people there in 1974.

Tropical Storm Allison was a tropical storm that devastated southeast Texas in June of the 2001 Atlantic hurricane season. An arguable example of the "brown ocean effect", Allison lasted unusually long for a June storm, remaining tropical or subtropical for 16 days, most of which when the storm was over land dumping torrential rainfall. The storm developed from a tropical wave in the northern Gulf of Mexico on June 4, 2001, and struck the upper Texas coast shortly thereafter. It drifted northward through the state, turned back to the south, and re-entered the Gulf of Mexico. The storm continued to the east-northeast, made landfall on Louisiana, then moved across the southeast United States and Mid-Atlantic. Allison was the first storm since Tropical Storm Frances in 1998 to strike the northern Texas coastline. 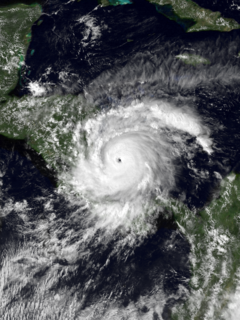 Hurricane Joan was a long lived, powerful hurricane that caused death and destruction in over a dozen countries in the Caribbean and Central America. Moving on a due west course for nearly two weeks in October 1988, Hurricane Joan caused widespread flooding and over 200 deaths after moving into Central America. Widespread suffering and economic crises were exacerbated by Joan, primarily across Nicaragua, as heavy rains and high winds impacted those near the hurricane's path.

Hurricane Stan was a relatively weak but deadly tropical cyclone that affected areas of Central America in early October 2005. The eighteenth named storm and eleventh hurricane of the 2005 Atlantic hurricane season, Stan formed from a tropical wave on October 1 after it had moved into the western Caribbean Sea. The depression slowly intensified, and reached tropical storm intensity the following day, before subsequently making its first landfall on the Yucatán Peninsula. Traversing the peninsula, the tropical storm weakened, but was able to re-intensify once it entered the Bay of Campeche. Under favorable conditions for tropical development, Stan attained hurricane strength on October 4, and later reached peak intensity with winds of 80 mph (130 km/h) and a minimum barometric pressure of 977 mbar. The hurricane maintained this intensity until landfall near Punta Roca Partida, Mexico later the same day. Once over the mountainous terrain of Mexico, however, Stan quickly weakened, and dissipated on October 5.

Severe storms in Australia refers to the storms, including cyclones, which have caused severe damage in Australia. 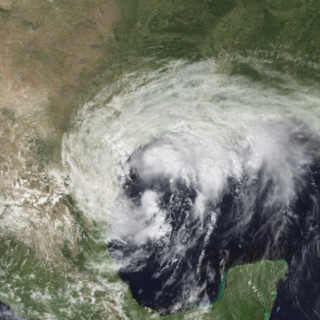 Tropical Storm Frances caused extensive flooding in Mexico and Texas in September 1998. The sixth tropical cyclone and sixth named storm of the annual hurricane season, Frances developed from a low pressure area in the Gulf of Mexico on September 8. The cyclone moved northward through the western Gulf of Mexico, making landfall across the central Texas coastline before recurving across the Midwest through southeast Canada and New England. A large tropical cyclone for the Atlantic Basin, yet an average sized system by western Pacific standards, the storm produced heavy rains across the Isthmus of Tehuantepec, Texas, western Louisiana and the Great Plains. 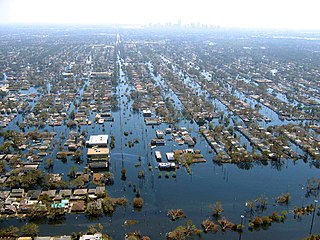 Floods in the United States: 2001–present is a list of flood events which were of significant impact to the country since 2001, inclusive. Floods are generally caused by excessive rainfall, excessive snowmelt, storm surge from hurricanes, and dam failure.

The 2007 Chittagong mudslides occurred in the port city of Chittagong in south-eastern Bangladesh. On 11 June 2007, heavy monsoon rainfall caused mudslides that engulfed slums around the hilly areas of the city. Experts had previously warned the increasing likelihood of landslides due to the Bangladesh government's failure in curbing the illegal hill cutting taking place in Chittagong.

Cyclone Inigo was tied with Cyclone Gwenda for being the most intense recorded cyclone in the Australian region in terms of pressure, with the possible exception of Cyclone Mahina. Inigo developed from a tropical low that crossed eastern Indonesia in late March 2003. Becoming a named tropical cyclone on 1 April, Inigo rapidly intensified as it tracked southwestward, reaching a minimum central pressure of 900 hPa on 4 April. An approaching trough weakened the cyclone and turned it to the southeast, and on 8 April, Inigo dissipated after making landfall on Western Australia, as a minimal tropical storm.

In October 2008, the remnants of a tropical cyclone caused extensive damage in Yemen, a poor country on the southern tip of the Arabian Peninsula. The storm, officially known as Deep Depression ARB 02, was the sixth tropical cyclone of the 2008 North Indian Ocean cyclone season, and the second tropical cyclone in the Arabian Sea that year. It formed on October 19 off the west coast of India from the same broader system that spawned a storm in the southern Indian Ocean. Moving generally westward, the depression failed to intensify much, reaching maximum sustained winds of only 55 km/h (35 mph). It was no longer classifiable as a tropical depression by October 23, and later that day, its remnants struck near Ash Shihr in eastern Yemen.

The 2011 China floods are a series of floods from June to September 2011 that occurred in central and southern parts of the People's Republic of China. They were caused by heavy rain that inundated portions of 12 provinces, leaving other provinces still suffering a prolonged drought, a total of over 36 million people have been affected, killing at least 355 and with direct economic losses of nearly US$6.5 billion. 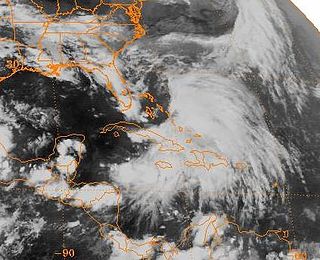 The 1986 Jamaica floods killed 50 people in the country, comparable to flooding that occurred in June 1979. The floods originated as a stationary front on May 24 that produced rainfall across much of the central Caribbean Sea for two weeks. Rainfall totals in Jamaica reached 635 mm (25.0 in) at Norman Manley International Airport. The flooding left heavy agriculture damage totaling $22.5 million, and 40,000 residents per day received meals after the event. Roads and bridges were damaged across the country, and one damaged bridge resulted in eight deaths after a bus crashed. The floods left 2,000 Jamaicans homeless.

Severe Tropical Cyclone Ita was the strongest tropical cyclone in the Australian region by central pressure, since George in 2007, and since Monica in 2006 by wind speed. The system was first identified over the Solomon Islands as a tropical low on 1 April 2014, and gradually moved westward, eventually reaching cyclone intensity on 5 April. On 10 April, Ita intensified rapidly into a powerful Category 5 system on the Australian Scale, but it weakened to a Category 4 system in the hours immediately preceding landfall the following day. At the time of landfall at Cape Flattery at 12 April 22:00 (UTC+10), the cyclone's Dvorak intensity was approximately T5.0, consistent with a weak Category 4 system, and considerably lower than the T6.5 observed when the system was at its peak intensity. Meteorologists noted the system had, at that time, begun an eyewall replacement cycle; as a result, the system was considerably less powerful than various intensity scales hadpredicted. Ita's impact on terrain was lessened, as a result.

The 2018 East Africa Floods were a natural disaster in Kenya, Ethiopia, Uganda, Rwanda, Somalia, Djibouti, and Burundi affecting millions of people. They began when excessive rains began falling in March 2018 following a year of severe drought, leading to massive flooding, landslides, and the failure and overflow of several dams. Record rainfall was recorded in several areas, surpassing various records set during the 1950s and during the 1997–98 El Niño event. Nearly 500 people have lost their lives while hundreds of thousands of others have been displaced. 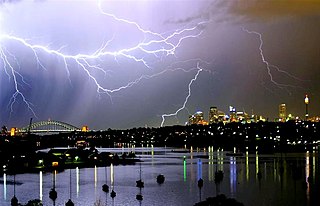 Severe storm events in Sydney are not uncommon and would include hail storms, wind storms, and flash flooding from rain caused either by East coast lows or ex-tropical cyclone remnants. East coast lows are low pressure depressions that can bring significant damage by heavy rain, cyclonic winds and huge swells. Sydney is rarely affected by cyclones, although remnants of ex-cyclones do affect the city.

The 2020 East Africa floods were a natural disaster in Rwanda, Kenya, Somalia, Burundi, Ethiopia, Uganda, Democratic Republic of Congo, Djibouti and Tanzania, affecting at least 700,000 people. They began when excessive rains began falling in March, leading to massive flooding and landslides. They caused more than 430 deaths, notably in Kenya and Rwanda.