During October 2017, West Midlands Trains revealed details for its planned procurement of new rolling stock; 26 CAF Civity diesel multiple units (80 carriages) and 81 electric multiple units based on Bombardier Transportation's Aventra platform (333 carriages), have been ordered and will replace various classes inherited from prior operators. It also became the launch customer for the Class 230 diesel electric multiple unit that are upcycled London Underground D78 Stock, these entered service in April 2019. During 2020, service levels were deliberately reduced by West Midlands Trains as a response to the COVID-19 pandemic. West Midlands Trains was amongst those train operators that were impacted by the 2022 United Kingdom railway strikes, being only capable of operating a minimal timetable on days of the strikes due to the number of staff involved.

In April 2016, the Department for Transport (DfT) announced the shortlist of bidders for the West Midlands franchise, comprising the incumbent operator Govia, MTR Corporation, and West Midlands Trains: a consortium of Abellio (70%), JR East (15%) and Mitsui (15%). [5] [6] [7] During July 2016, MTR Corporation abruptly opted to withdraw itself from the bidding process. [8] [9]

In August 2016, a formal invitation to tender for the franchise was issued to the two remaining bidders. [10] During August 2017, the West Midlands Trains consortium was awarded the franchise; it took over operations from the prior operator, London Midland, on 10 December 2017. [11] [12] The franchise is scheduled to run until March 2026. [13] [14]

By mid-2020, West Midlands Trains had considerably curtailed its services in response to the significant decline of passenger travel amid the COVID-19 pandemic. [18] [19] From 15 June 2020, both passengers and staff on public transport in England, including West Midlands Trains services, were required to wear face coverings while travelling, and that anyone failing to do so would be liable to be refused travel or fined. [20] [21]

In May 2021, the company was criticised after it sent an email to 2,500 employees apparently thanking them for their work during the COVID-19 pandemic and offering a financial bonus; [22] however, employees who clicked on the link within the email were informed that there was, in fact, no bonus and that the email had been a "phishing simulation test”. [23]

West Midlands Trains was one of several train operators impacted by the 2022 United Kingdom railway strike, which was the first national rail strike in the UK for three decades. [24] Its workers were amongst those who participated in industrial action due to a dispute over pay and working conditions. [25] West Midlands Trains was only capable of operating a very minimalist timetable on any of the planned dates for the strikes due to the number of staff involved. [26] [27]

WMT services are split into two businesses which operate under two distinct sub-brands. Train services running on the West Coast Main Line, including those running to/from London Euston, Liverpool Lime Street and Crewe, operate under the London Northwestern Railway brand. This name was chosen in tribute to the former London & North Western Railway (LNWR), the company that operated services on the route between 1846 and 1922. Branding of trains and associated publicity use a green colour scheme with a logo composed of the letters L, N and W. [28] [29]

WMT's services along the West Coast Main Line rail corridor are operated under the London Northwestern Railway brand. These services include: [31]

As of May 2022, the typical off-peak Monday - Saturday London Northwestern Railway service pattern, with frequencies in trains per hour (tph), includes: [32]

Sunday services are similar however:

Early morning and late night services have amended calling patterns and usually call at most stations.

Services on the short Stourbridge Town branch line are run by the open access operator Pre Metro Operations, who operate services on behalf of WMT under the West Midlands Railway brand name.

As of May 2022, the typical off-peak Monday - Saturday West Midlands Railway service pattern, with frequencies in trains per hour (tph), includes: [33]

Sunday services are generally hourly on most routes however:

The concept of using the lightweight railcar dates from 2006 when a year-long pilot scheme began on the Stourbridge Town branch line on Sundays, using a Parry People Movers PPM50 unit constructed in 2002 and numbered as 999900 under TOPS. [39] The success of this trial led to the provision of regular services using the technology in the franchise plans for the new West Midlands Franchise. Following the award of the franchise to London Midland, it placed an order for two PPM60 units with Parry People Movers, through Porterbrook. The service itself was operated for London Midland by Pre Metro Operations. [40]

These two units are 139 001 and 139 002, composed of vehicle numbers 39001 and 39002 in the British carriage and wagon numbering and classification system. The vehicles are mechanically similar to 999 900, but are approximately one metre longer. They were intended to start operating on the Stourbridge Town branch in 2008. In January 2009 it was confirmed that 139001 was still undergoing testing at Chasewater Railway and 139002 was still not completed.

Despite the difficulties in the commissioning of the two Class 139 units, London Midland consistently outlined its faith that they would be ready to enter service. In March 2009, it was announced that the first unit had received its passenger certification from Network Rail, allowing it to carry passengers. London Midland stated that they would begin a phased entry into service, starting with weekend operation in April, leading up to a full service by the timetable change in May 2009. Until then, London Midland temporarily returned a Class 153 to operating the branch service. 139 002 officially entered service on 29 March 2009 as part of the type's phased entry. This unit had previously worked in full service, including all-day on Monday 11 May 2009 and previously had worked all morning services during February and March 2009. In May 2009, the first unit, 139 001 was finally delivered to Stourbridge, with 999 900 removed at the same time. [41] Test unit 999 900 had been on the branch line between 2005 and 2009. At the point of introduction, they displaced a single Class 153 DMU that was previously allocated to the branch line. By December 2009, the 200,000th passenger had been carried by the railcars.

West Midlands Trains operate a total of 35 two-car and three-car Class 172 units, 27 of which had been ordered by predecessor London Midland, who originally planned for them to enter service by the end of 2010 on services to and from Birmingham Snow Hill, replacing Class 150s. The original 27 sets have revised front ends with end gangways which make the trains look like the Electrostar family of units.

From 1 September 2011, the Class 172s started operating on the Snow Hill Lines with some weekend work from Birmingham – Hereford. When first used in service, the units suffered a fault with engine vibration in the passenger cabin, which has since been rectified.

The units were originally meant to replace all of the Class 150s, however three were retained until 2019 and moved on to Northern after the Class 172/0 and Class 230 units entered service. Between late 2018 and early 2019 West Midlands Railway inherited the London Overground 172/0s to replace the remaining Class 150s and Class 153s operating on the Coventry to Leamington line, the Coventry to Nuneaton line and Birmingham to Hereford. All had entered service by May 2019.

The first of these new units entered service on the Shrewsbury line on 17 October 2022. [48]

West Midlands Trains are also the first operator of the Class 230, a new class of diesel electric multiple unit that are upcycled London Underground D78 Stock. During October 2017, the company announced its plans to procure three two-car D-Train units for use on the Marston Vale line. [49] [50] During April 2019, four months later than intended, the first Class 230 entered regular service. [51]

Seventeen of the Class 323 units will be transferred to Northern Trains to work with the existing 323 units already in service with them. [52] 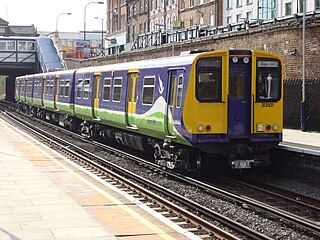 Central Trains was a train operating company in the United Kingdom owned by National Express that operated a variety of local and inter-regional trains from 2 March 1997 until 11 November 2007.

The West Coast Main Line (WCML) is one of the most important railway corridors in the United Kingdom, connecting the major cities of London and Glasgow with branches to Birmingham, Liverpool, Manchester and Edinburgh. It is one of the busiest mixed-traffic railway routes in Europe, carrying a mixture of intercity rail, regional rail, commuter rail and rail freight traffic. The core route of the WCML runs from London to Glasgow for 399 miles (642 km) and was opened from 1837 to 1869. With additional lines deviating to Northampton, Birmingham, Manchester, Liverpool and Edinburgh, this totals a route mileage of 700 miles (1,127 km). The Glasgow–Edinburgh via Carstairs line connects the WCML to Edinburgh, however the main London–Edinburgh route is the East Coast Main Line. Several sections of the WCML form part of the suburban railway systems in London, Coventry, Birmingham, Liverpool, Manchester and Glasgow, with many more smaller commuter stations, as well as providing links to more rural towns. 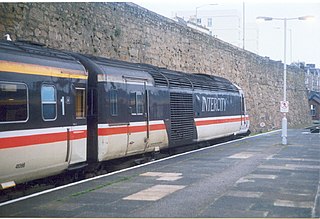 The British Rail Class 170 Turbostar is a British diesel multiple unit (DMU) passenger train built by Adtranz and later Bombardier Transportation at Derby Litchurch Lane Works. Introduced after privatisation, these trains operate regional as well as long-distance services, and to a lesser extent suburban services. A total of 139 units were built, but some were later converted to Class 168 and Class 171 units. These trains are currently in use with West Midlands Trains, CrossCountry, East Midlands Railway, Transport for Wales Rail, ScotRail and Northern Trains. 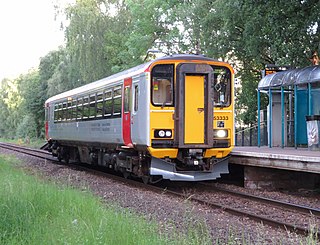 The British Rail Class 153Super Sprinters are single-coach railcars converted from two-coach Class 155 diesel multiple units in the early 1990s. The class was intended for service on rural branch lines, either where passenger numbers do not justify longer trains or to boost the capacity on services with high passenger volume. 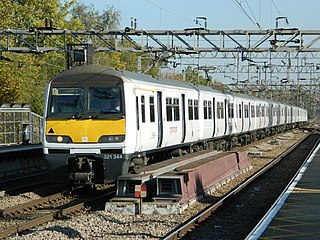 The British Rail Class 321 are electric multiple unit (EMU) passenger trains built by British Rail Engineering Limited's Holgate Road carriage works in three batches between 1988 and 1991. The class uses alternating current (AC) overhead electrification. The design was successful and led to the development of the similar Class 320 and Class 322.

The British Rail Class 350 is a class of electric multiple-unit built by Siemens Transportation Systems to its Desiro design between 2004 and 2014. All 87 are now operated by West Midlands Trains, having previously been operated by Central Trains, Silverlink, Southern, London Midland, First TransPennine Express and TransPennine Express.

Brierley Hill railway station was a station on the Oxford-Worcester-Wolverhampton Line serving the town of Brierley Hill in England. 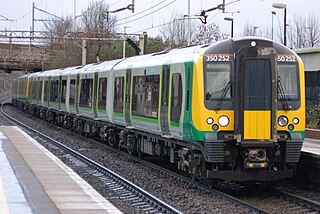 London Midland was a train operating company in England which operated the West Midlands franchise between 11 November 2007 and 10 December 2017. It was owned by the British transport group Govia. 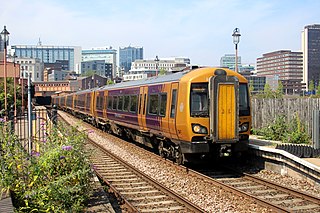 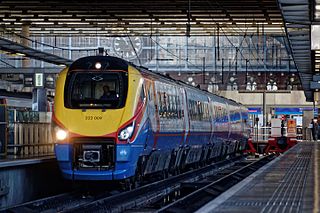 British Rail Class 139 is the TOPS classification for PPM60 model lightweight railcars built by Parry People Movers, for use on the British rail network. The class were originally built in 2008 for operation on the Stourbridge Town branch line following an extensive trial with a prototype registered as a Class 999 unit. 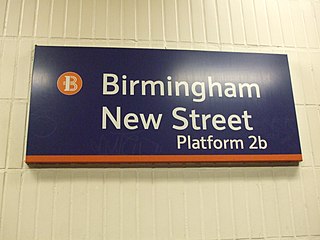 The British Rail Class 730 Aventra is a type of electric multiple-unit passenger train designed by Bombardier Transportation and built by Alstom for West Midlands Trains. Two separate batches of the fleet will be built; 43 three-car units and 36 five-car units.

The British Rail Class 196 Civity is a class of diesel multiple unit built for West Midlands Trains by Spanish rolling stock manufacturer CAF. A total of 26 units have been built; 12 two-car units and 14 four-car units. 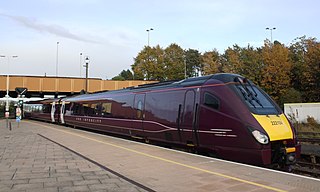 Abellio East Midlands Limited, trading as East Midlands Railway (EMR), is a train operating company in England, owned by Abellio, and is the current operator of the East Midlands franchise.