Firs (Abies) are a genus of 48–56 species of evergreen coniferous trees in the family Pinaceae. They are found through much of North and Central America, Europe, Asia, and North Africa, occurring in mountains over most of the range. Firs are most closely related to the genus Cedrus (cedar). Douglas firs are not true firs, being of the genus Pseudotsuga .

The genus name is derived from the Latin "to rise" as a reference to their height. [2] The common English name originates with the Old Norse, fyri, or the Old Danish, fyr. [3]

They are large trees, reaching heights of 10–80 m (33–262 ft) tall with trunk diameters of 0.5–4 m (1 ft 8 in–13 ft 1 in) when mature. Firs can be distinguished from other members of the pine family by the way in which their needle-like leaves are attached singly to the branches with a base resembling a suction cup, and by their cones, which, like those of true cedars ( Cedrus ), stand upright on the branches like candles and disintegrate at maturity.

Identification of the different species is based on the size and arrangement of the leaves, the size and shape of the cones, and whether the bract scales of the cones are long and exserted, or short and hidden inside the cone.

Firs can be distinguished from other members of the pine family by the unique attachment of their needle-like leaves to the twig by a base that resembles a small suction cup.

The leaves are significantly flattened, sometimes even looking like they are pressed, as in A. sibirica .

The leaves have two whitish lines on the bottom, each of which is formed by wax-covered stomatal bands. In most species, the upper surface of the leaves is uniformly green and shiny, without stomata or with a few on the tip, visible as whitish spots. Other species have the upper surface of leaves dull, gray-green or bluish-gray to silvery (glaucous), coated by wax with variable number of stomatal bands, and not always continuous. An example species with shiny green leaves is A. alba , and an example species with dull waxy leaves is A. concolor .

The tips of leaves are usually more or less notched (as in A. firma ), but sometimes rounded or dull (as in A. concolor , A. magnifica ) or sharp and prickly (as in A. bracteata , A. cephalonica , A. holophylla ). The leaves of young plants are usually sharper.

The way they spread from the shoot is very diverse, only in some species comb-shaped, with the leaves arranged on two sides, flat ( A. alba ) [4] [ clarification needed ]

Firs differ from other conifers in having erect, cylindrical cones 5–25 cm (2–10 in) long that disintegrate at maturity to release the winged seeds.

In contrast to spruces, fir cones do not hang. Even large fir cones grow upwards like "candles", the new growth of the tree.

Mature cones are usually brown, young in summer can be green, for example:

Section Abies is found in central, south, and eastern Europe and Asia Minor.

Section Grandis is found in western North America to Mexico, Guatemala, Honduras and El Salvador, in lowlands in the north, moderate altitudes in south.

Section Momi is found in east and central Asia and the Himalaya, generally at low to moderate altitudes.

Section Amabilis is found in the Pacific Coast mountains in North America and Japan, in high rainfall areas.

Section Pseudopicea is found in the Sino – Himalayan mountains at high altitudes.

Section Oiamel is found in central Mexico at high altitudes.

Wood of most firs is considered unsuitable for general timber use and is often used as pulp or for the manufacture of plywood and rough timber. Because this genus has no insect or decay resistance qualities after logging, it is generally recommended in construction purposes for indoor use only (e.g. indoor drywall on framing). Firwood left outside cannot be expected to last more than 12 to 18 months, depending on the type of climate it is exposed to.

Nordmann fir, noble fir, Fraser fir and balsam fir are popular Christmas trees, generally considered to be the best for this purpose, with aromatic foliage that does not shed many needles on drying out. Many are also decorative garden trees, notably Korean fir and Fraser fir, which produce brightly coloured cones even when very young, still only 1–2 m (3.3–6.6 ft) tall. Other firs can grow anywhere between 30 and 236 feet (9.1 and 71.9 m) tall. Fir Tree Appreciation Day is June 18.

Abies religiosa —sacred fir, is the overwinter host for the monarch butterfly . [5] [6]

Firs are used as food plants by the caterpillars of some Lepidoptera species, including Chionodes abella (recorded on white fir), autumnal moth, conifer swift (a pest of balsam fir), the engrailed, grey pug, mottled umber, pine beauty and the tortrix moths Cydia illutana (whose caterpillars are recorded to feed on European silver fir cone scales) and C. duplicana (on European silver fir bark around injuries or canker).

Abies spectabilis or Talispatra is used in Ayurveda as an antitussive (cough suppressant) drug. [7] [8] 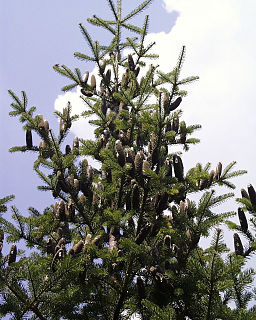 Abies balsamea or balsam fir is a North American fir, native to most of eastern and central Canada and the northeastern United States. 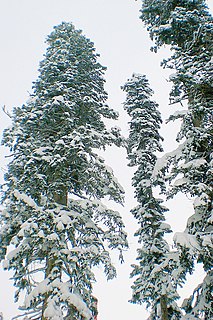 Abies nordmanniana, the Nordmann fir or Caucasian fir, is a fir indigenous to the mountains south and east of the Black Sea, in Turkey, Georgia and the Russian Caucasus. It occurs at altitudes of 900–2,200 m on mountains with precipitation of over 1,000 mm.

Abies bracteata, the Santa Lucia fir or bristlecone fir, is the rarest and most endemic fir in North America, and according to some, the world. It is confined to steep-sided slopes and the bottoms of rocky canyons in the Santa Lucia Mountains, in the Big Sur region on the central coast of California, United States. 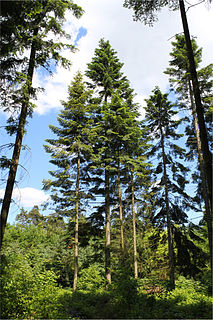 Abies grandis is a fir native to the Pacific Northwest and Northern California of North America, occurring at altitudes of sea level to 1,800 m. It is a major constituent of the Grand Fir/Douglas Fir Ecoregion of the Cascade Range. 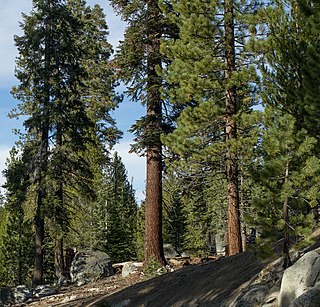 Abies magnifica, the red fir or silvertip fir, is a western North American fir, native to the mountains of southwest Oregon and California in the United States. It is a high elevation tree, typically occurring at 1,400–2,700 metres (4,600–8,900 ft) elevation, though only rarely reaching tree line. The name red fir derives from the bark color of old trees. 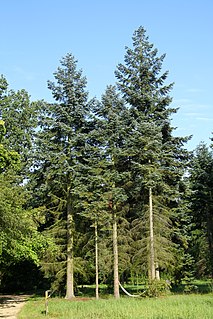 Abies procera, the noble fir, also called red fir and Christmas tree, is a western North American fir, native to the Cascade Range and Coast Range mountains of extreme northwest California and western Oregon and Washington in the United States. It is a high-altitude tree, typically occurring at 300–1,500 m (980–4,920 ft) altitude, only rarely reaching the tree line.

The Fraser fir is a species of fir native to the Appalachian Mountains of the Southeastern United States. 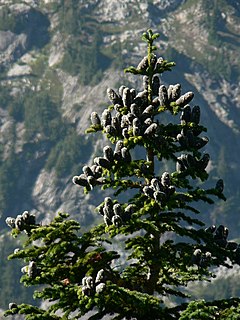 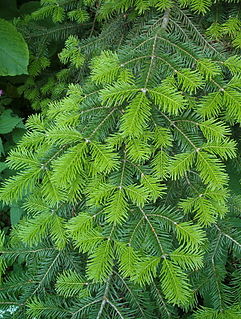 Abies veitchii, also known as Veitch's silver-fir, is a fir native to Japan on the islands of Honshū and Shikoku. It lives in moist soils in cool wet mountain forests at elevations of 1500–2800 m. It is very shade-tolerant when young, but is not long-lived. 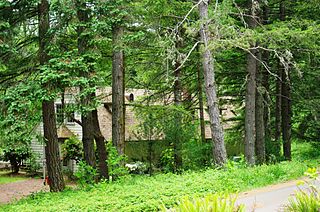 Peavy Arboretum is an arboretum operated by Oregon State University and located on Arboretum Road, Corvallis, Oregon. It is open to the public daily without charge. 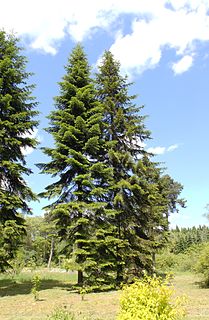 Abies sibirica, the Siberian fir, is a coniferous evergreen tree native to the taiga east of the Volga River and south of 67°40' North latitude in Siberia through Turkestan, northeast Xinjiang, Mongolia and Heilongjiang. 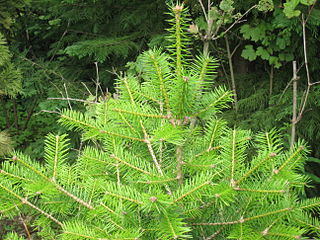 Abies holophylla, also called needle fir or Manchurian fir, is a species of fir native to mountainous regions of northern Korea, southern Ussuriland, and China in the provinces of Heilongjiang, Jilin, and Liaoning. 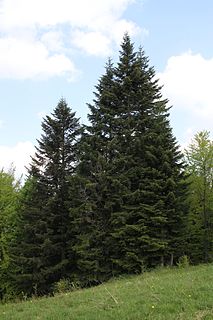 Abietoideae is a subfamily of the conifer family Pinaceae. The name is from the genus Abies (firs), which contains most of the species in the genus. Six genera are currently assigned to this subfamily: Abies, Cedrus, Keteleeria, Nothotsuga, Pseudolarix, and Tsuga. 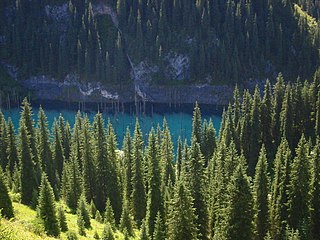 Picea schrenkiana, Schrenk's spruce, or Asian spruce, is a spruce native to the Tian Shan mountains of central Asia in western China (Xinjiang), Kazakhstan, and Kyrgyzstan. It grows at altitudes of 1,200–3,500 metres, usually in pure forests, sometimes mixed with the Tien Shan variety of Siberian fir. Its name was given in honour of Alexander von Schrenk (1816–1876). 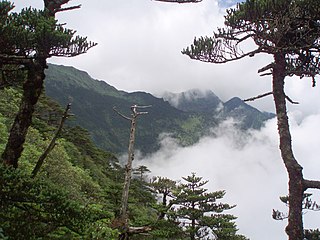 Abies delavayi, the Delavay's silver-fir or Delavay's fir, is a species of fir, native to Yunnan in southwest China and adjoining border areas in southeastern Tibet, far northeastern India, northern Myanmar, and far northwestern Vietnam. It is a high altitude mountain tree, growing at elevations of 3,000–4,000 m, often occupying the tree line. 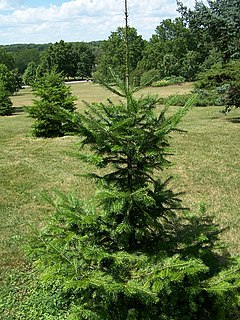