Many musical genres are particular to some geographical region or to an ethnic, religious or linguistic group.

An ethnic group or ethnicity is a category of people who identify with each other, usually on the basis of a presumed common genealogy or ancestry or on similarities such as common language or dialect, history, society, culture or nation. Ethnicity is often used synonymously with the term nation, particularly in cases of ethnic nationalism, and is separate from but related to the concept of races. 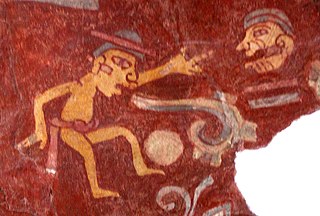 Language is a system that consists of the development, acquisition, maintenance and use of complex systems of communication, particularly the human ability to do so; a language is any specific example of such a system.

By ethnicity or origin 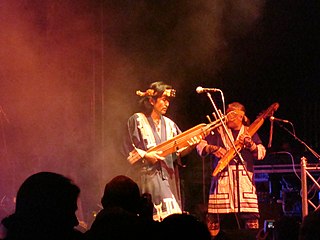 Ainu music is the musical tradition of the Ainu people of northern Japan.

Anglo-American music is derived from the English culture of the Thirteen Colonies of the United States and has been a founding influence for American folk and popular music. 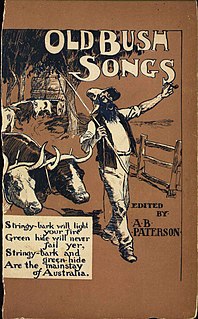 Australian folk music is the traditional music from the large variety of immigrant cultures and those of the original Australian inhabitants. 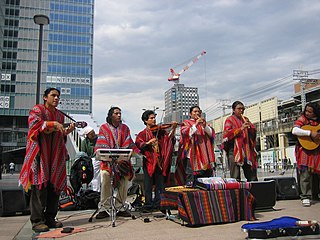 Arabic music is the music of the Arab world with all its different music styles and genres. Arabic countries have many styles of music and also many dialects; each country has its own traditional music.

Basque music refers to the music made in the Basque Country, reflecting traits related to its society/tradition, and devised by people from that territory. While traditionally more closely associated to rural based and Basque language music, the growing diversification of its production during the last decades has tipped the scale in favour of a broad definition.

Baganda music is a music culture developed by the people of Uganda with many features that distinguish African music from other world music traditions. Parts of this musical tradition have been extensively researched and well-documented, with textbooks documenting this research. Therefore, the culture is a useful illustration of general African music.

Ewe music is the music of the Ewe people of Togo, Ghana, and Benin, West Africa. Instrumentation is primarily percussive and rhythmically the music features great metrical complexity. Its highest form is in dance music including a drum orchestra, but there are also work, play, and other songs. Ewe music is featured in A. M. Jones's Studies in African Music.

The Hausa are one of the largest ethnic groups in Nigeria, Niger, Ghana, Sudan, Cameroon and in many West and Central African countries. Their folk music has played an important part in the development of Nigerian music, contributing such elements as the Goje, a one-stringed fiddle. There are two broad categories of traditional Hausa music: rural folk music and urban court music. They introduced the African pop culture genre that is still popular today.

The Arapaho are a tribe of Native Americans from the western Great Plains, in the area of eastern Colorado and Wyoming. Traditional Arapaho music, described by Bruno Nettl, includes sacred and secular songs. Traditional music uses terraced descent type melodic motion, with songs consisting of two sections, each with a range of more than an octave and scales of four to six tones.

Blackfoot music is the music of the Blackfoot people. Singing predominates and was accompanied only by percussion.

The Dene and their direct language relations live in the Yukon, Northwest Territories, British Columbia, Alberta, Saskatchewan, Manitoba, as well as some parts of California, and through to the Apache and Navajo lands in the South Central United States. Their music includes modern rock and country songs, jigs and reels, work songs, community dances, numerous kinds of religious songs and lullabies.

By continent or other international region

By province, region or other sub-national entity 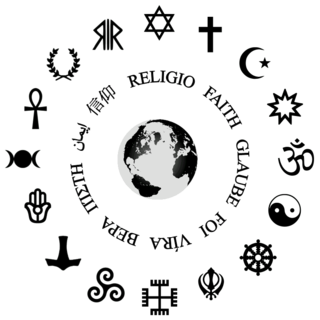 The following outline is provided as an overview of and topical guide to religion: 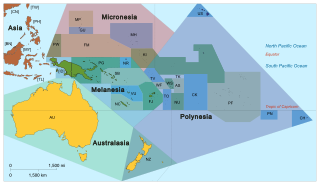 Melanesians are the predominant and indigenous inhabitants of Melanesia, in a wide area from New Guinea to as far east as the islands of Vanuatu and Fiji. Most speak either one of the many languages of the Austronesian language family, especially ones in the Oceanic branch, or from one of the many unrelated families of Papuan languages. Other languages are the several creoles of the region, such as Tok Pisin, Hiri Motu, Solomon Islands Pijin, Bislama, and Papuan Malay. 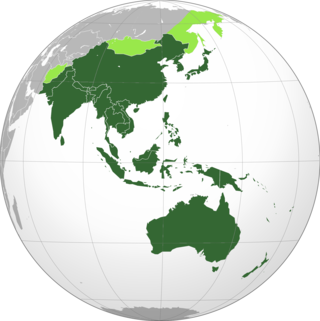 Asia-Pacific or Asia Pacific is the part of the world in or near the Western Pacific Ocean. The Asia-Pacific varies in area depending on context, but it generally includes East Asia, South Asia, Southeast Asia, and Oceania.

The following outline is provided as an overview of and topical guide to music:

The United Nations geoscheme is a system which divides the countries of the world into regional and subregional groups. It was devised by the United Nations Statistics Division (UNSD) based on the M49 coding classification.

Divided regions are transnational regions, islands, etc. that may have at one time been a united sovereign state but are or have been subsequently politically divided by national borders, into separate sovereign and/or administrative divisions. The later qualification includes many reorganized regions within nation states blurring the pure "transnational" distinction, but retaining the sense of a historic region once governed together which is significant both historically and culturally. 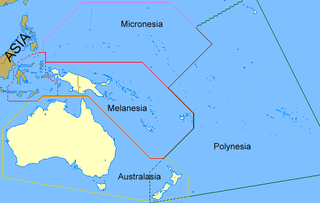 This article is a gallery of the flags of the principal subdivisions of the countries and territories of Oceania. For purposes of this article, Oceania is taken to comprise Australasia, Melanesia, Micronesia and Polynesia.