Secondary sector of the economy

Last updated January 15, 2022
Industries that produce a finished, usable product or are involved in construction

In macroeconomics, the secondary sector of the economy is an economic sector in the three-sector theory that describes the role of manufacturing. It encompasses industries that produce a finished, usable product or are involved in construction.

This sector generally takes the output of the primary sector (i.e. raw materials) and creates finished goods suitable for sale to domestic businesses or consumers and for export (via distribution through the tertiary sector). Many of these industries consume large quantities of energy, require factories and use machinery; they are often classified as light or heavy based on such quantities. This also produces waste materials and waste heat that may cause environmental problems or pollution (see negative externalities). Examples include textile production, car manufacturing, and handicraft. [1]

Manufacturing is an important activity in promoting economic growth and development. Nations that export manufactured products tend to generate higher marginal GDP growth, which supports higher incomes and therefore marginal tax revenue needed to fund such government expenditures as health care and infrastructure. Among developed countries, it is an important source of well-paying jobs for the middle class (e.g., engineering) to facilitate greater social mobility for successive generations on the economy. Currently, an estimated 20% of the labor force in the United States is involved in the secondary industry. [2]

The secondary sector depends on the primary sector for the raw materials necessary for production. Countries that primarily produce agricultural and other raw materials (i.e., primary sector) tend to grow slowly and remain either under-developed or developing economies. The value added through the transformation of raw materials into finished goods reliably generates greater profitability, which underlies the faster growth of developed economies.

In microeconomics, economies of scale are the cost advantages that enterprises obtain due to their scale of operation, and are typically measured by the amount of output produced. A decrease in cost per unit of output enables an increase in scale. At the basis of economies of scale there may be technical, statistical, organizational or related factors to the degree of market control.

The tertiary sector of the economy, generally known as the service sector, is the third of the three economic sectors of the three-sector theory,. The others are the secondary sector, and the primary sector. 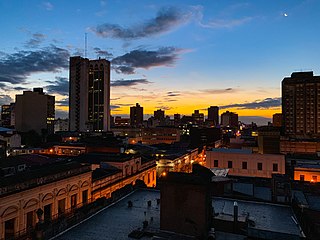 The economy of Paraguay is a market economy that is highly dependent on agriculture products. In recent years, Paraguay's economy has grown as a result of increased agricultural exports, especially soybeans. Paraguay has the economic advantages of a young population and vast hydroelectric power. Its disadvantages include the few available mineral resources, and political instability. The government welcomes foreign investment.

Labor intensity is the relative proportion of labor used in any given process. Its inverse is capital intensity.

The dual-sector model is a model in development economics. It is commonly known as the Lewis model after its inventor W. Arthur Lewis. It explains the growth of a developing economy in terms of a labour transition between two sectors, the capitalist sector and the subsistence sector. 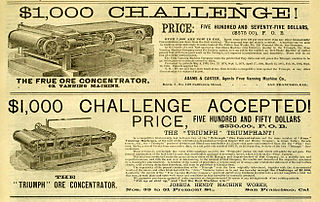 In economics, competition is a scenario where different economic firms are in contention to obtain goods that are limited by varying the elements of the marketing mix: price, product, promotion and place. In classical economic thought, competition causes commercial firms to develop new products, services and technologies, which would give consumers greater selection and better products. The greater the selection of a good is in the market, prices are typically lower for the products, compared to what the price would be if there was no competition (monopoly) or little competition (oligopoly). According to Antoine Augustin Cournot, the definition of competition is the situation in which price does not vary with quantity, or in which the demand curve facing the firm is horizontal. The level of competition that exists within the market is dependent on a variety of factors both on the firm/ seller side; the number of firms, barriers to entry, information, and availability/ accessibility of resources. The number of buyers within the market also factors into competition with each buyer having a willingness to pay, influencing overall demand for the product in the market.

The technological and industrial history of China is extremely varied, and extensive. China's industrial sector has shown great progress using most of its technology from the 1950s.

In Pakistan, cottage or household industries hold an important position in rural set-up. Most villages are self-sufficient in the basic necessities of life. They have their own carpenters, cobblers, potters, craftsmen and cotton weavers. Many families depend on cottage industries for income.

The North–South model, developed largely by Columbia University economics professor Ronald Findlay, is a model in developmental economics that explains the growth of a less developed "South" or "periphery" economy that interacts through trade with a more developed "North" or "core" economy. The North–South model is used by dependencia theorists as a theoretical economic justification for dependency theory.

The textile industry in India traditionally, after agriculture, is the only industry that has generated huge employment for both skilled and unskilled labour. The textile industry continues to be the second-largest employment generating sector in the India. It offers direct employment to over 35 million in the country. According to the Ministry of Textiles, the share of textiles in total exports during April–July 2010 was 11.04%. During 2009–2010, the Indian textile industry was pegged at US$55 billion, 64% of which services domestic demand. In 2010, there were 2,500 textile weaving factories and 4,135 textile finishing factories in all of India. According to AT Kearney’s ‘Retail Apparel Index’, India was ranked as the fourth most promising market for apparel retailers in 2009.