Whitworth Park is a public park in south Manchester, England, and the location of the Whitworth Art Gallery. To the north are the University of Manchester's student residences known as "Toblerones". It was historically in Chorlton on Medlock but is now included in the Moss Side ward.

In 2015, the Whitworth reopened after it was transformed by a £15 million capital redevelopment that doubled its exhibition spaces, restored period features and opened itself up to its surrounding park. The gallery received more than 440,000 visitors in its first year and was awarded the Art Fund’s Museum of the Year prize in 2015. [1] 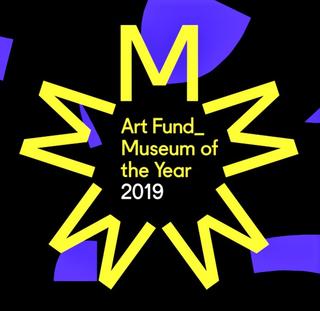 In June 2017, Maria Balshaw stepped down as the director to take up her new role as the Director of Tate. Nick Merriman was acting Interim Director of the Whitworth[ citation needed ]

Nick Merriman is the director of the Horniman Museum. Previously he was the director of the Manchester Museum in Manchester, England. As of 1 June 2017, Merriman also acted as interim director of the Whitworth, University of Manchester. Previously Merriman worked at the Museum of London and University College, London. In April 2017 he was made honorary professor of museum studies in the University of Manchester. He is known for his contributions to the development of public archaeology and museum studies, and for influencing the heritage sector around issues of cultural diversity, sustainability and the future of collections. He is the chair of the Rothesay Pavilion Charity.

On 11 October 2018 it was announced that Alistair Hudson would be the new Director of Manchester Art Gallery and the Whitworth. Hudson, previously Director at MIMA, is a co-director of the Asociación de Arte Útil.[ citation needed ] 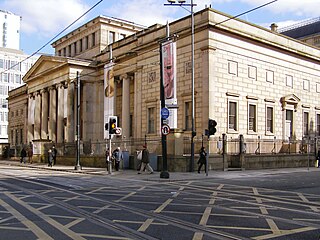 Manchester Art Gallery, formerly Manchester City Art Gallery, is a publicly owned art museum on Mosley Street in Manchester city centre. The main gallery premises were built for a learned society in 1823 and today its collection occupies three connected buildings, two of which were designed by Sir Charles Barry. Both Barry's buildings are listed. The building that links them was designed by Hopkins Architects following an architectural design competition managed by RIBA Competitions. It opened in 2002 following a major renovation and expansion project undertaken by the art gallery. 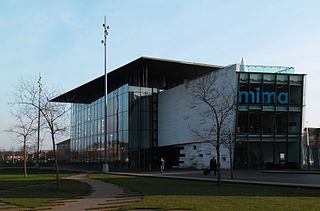 Middlesbrough Institute of Modern Art, or mima, is a contemporary art gallery based in the centre of Middlesbrough, England. The gallery was formally launched on Sunday 27 January 2007. It is currently run in a partnership with Teesside University.

The gallery was founded in 1889 by Robert Dukinfield Darbishire with a donation from Sir Joseph Whitworth, as The Whitworth Institute and Park. The first building was completed in 1908. [2] In 1958 the gallery became part of the University of Manchester. [3]

Robert Dukinfield Darbishire (1826–1908) was a prominent Manchester lawyer and philanthropist.

Sir Joseph Whitworth, 1st Baronet was an English engineer, entrepreneur, inventor and philanthropist. In 1841, he devised the British Standard Whitworth system, which created an accepted standard for screw threads. Whitworth also created the Whitworth rifle, often called the "sharpshooter" because of its accuracy and considered one of the earliest examples of a sniper rifle.

In October 1995 the mezzanine court in the centre of the building was opened. The new gallery, designed chiefly for the display of sculpture, won a RIBA regional award. [4] In 2010 the art gallery received 172,000 visitors, making it one of Greater Manchester's ten most-visited tourist attractions. [5]

In February 2015, the Whitworth reopened after a £15 million capital redevelopment and received over 440,000 visitors in its first reopening year. It was shortlisted for the Stirling Prize and won the Art Fund’s Museum of the Year [1] in 2015.

On Saturday 26 April 2003, three paintings — Van Gogh's The Fortification of Paris with Houses, Picasso's Poverty and Gauguin's Tahitian Landscape – were stolen from the gallery. [6] [7] They were later found rolled up in a nearby public toilet and were subsequently put back on display. [8]

The Grade II listed gallery was built between 1895 and 1900 in a free Jacobean style to the designs of J.W. Beaumont. The gallery consisting two storeys and a basement is constructed of red brick with bands and dressings of matching terracotta and has green slate roofs. Its nine-bay main range has two towers and a large projecting semi-circular porch with a screen of paired stone Ionic columns and a stone frieze below a balustraded parapet. [9]

An architectural competition was launched by RIBA Competitions to design an extension in 2008 and funding was secured in February 2011. [10] [11] In September 2013 the gallery closed for refurbishment and extension works. [12] The £15 million redevelopment was supported by the Heritage Lottery Fund and the University of Manchester. [12] The refurbishment works, undertaken by architects MUMA envisaged the gallery reopening to the public by summer 2014, [12] but complications delayed the opening. [13]

The development includes expanded gallery areas, a learning studio, study centre, an art garden and cafe. Developers have constructed a glass, stainless steel and brick extension consisting of two wings which extend into Whitworth Park from the back of the gallery building. The wings are connected by a glass promenade. The extension means the gallery is a third larger than previously. [13]

The extension, which opened on 14 February 2015 doubles the gallery's public space. It will provide more space for displaying the 55,000 items in the gallery's collection and link the building to Whitworth Park. [14]

The refurbishment and extension work resulted in the development winning a RIBA National Award in 2015 and subsequently being shortlisted for the RIBA Stirling Prize. [15] The Whitworth won the Art Fund’s Museum of the Year award in 2015. [1] 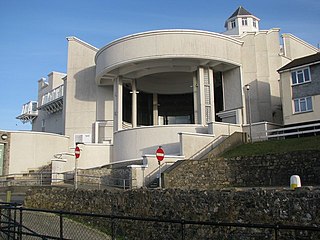 Tate St Ives is an art gallery in St Ives, Cornwall, England, exhibiting work by modern British artists with links to the St Ives area. The Tate also took over management of another museum in the town, the Barbara Hepworth Museum and Sculpture Garden, in 1980. 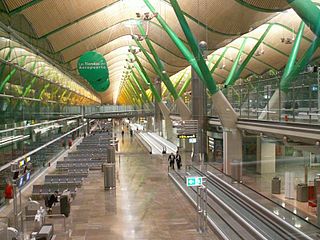 The Royal Institute of British Architects Stirling Prize is a British prize for excellence in architecture. It is named after the architect James Stirling, organised and awarded annually by the Royal Institute of British Architects (RIBA). The RIBA Stirling Prize is presented to "the architects of the building that has made the greatest contribution to the evolution of architecture in the past year." The architects must be RIBA members. Until 2014 the building could be anywhere in the European Union, but since 2015 has had to be in the UK. In the past the award has come with a £20,000 prize, but currently it carries no prize money.

Foster + Partners is a British international studio for architecture and integrated design, with headquarters in London. The practice is led by its founder and chairman, Norman Foster, and has constructed many high-profile glass-and-steel buildings.

The Art Gallery of New South Wales (AGNSW), located in The Domain in Sydney, New South Wales, Australia, is the most important public gallery in Sydney and one of the largest in Australia. The Gallery's first public exhibition opened in 1874. Admission is free to the general exhibition space, which displays Australian art, European and Asian art. A dedicated Asian Gallery was opened in 2003.

The McManus: Dundee's Art Gallery and Museum is a Gothic Revival-style building, located in the centre of Dundee, Scotland. The building houses a museum and art gallery with a collection of fine and decorative art as well as a natural history collection. It is protected as a Category A listed building.

Victor Musgrave (1919–1984) was a British poet, art dealer and curator. Described by David Sylvester as a 'true pioneer' Musgrave was the first gallerist to show Bridget Riley and was a champion of Art Brut. 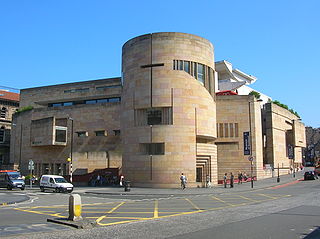 The National Museum of Scotland in Edinburgh, Scotland, was formed in 2006 with the merger of the new Museum of Scotland, with collections relating to Scottish antiquities, culture and history, and the adjacent Royal Scottish Museum, with collections covering science and technology, natural history, and world cultures. The two connected buildings stand beside each other on Chambers Street, by the intersection with the George IV Bridge, in central Edinburgh. The museum is part of National Museums Scotland. Admission is free. 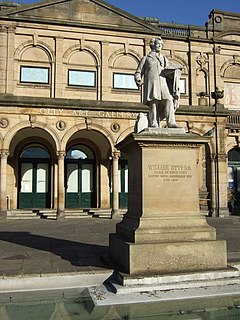 York Art Gallery in York, England is a public art gallery with a collection of paintings from 14th-century to contemporary, prints, watercolours, drawings, and ceramics. It closed for major redevelopment in 2013, reopening in summer of 2015. The building is a Grade II listed building. and is managed by York Museums Trust. 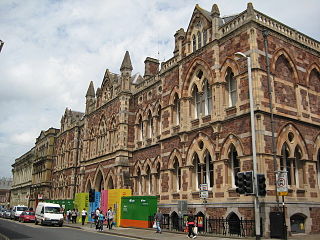 Fuglsang Art Museum is an art museum set in rural surroundings in Guldborgsund Municipality on the island of Lolland in Denmark. It is part of the Fuglsang Cultural Centre. The museum features Danish art with an emphasis on artists and motifs of local provenance.

The Hepworth Wakefield is an art museum in Wakefield, West Yorkshire, England, which opened on 21 May 2011. The gallery is situated on the south side of the River Calder and takes its name from artist and sculptor Barbara Hepworth who was born and educated in the city.

RIBA Competitions is the Royal Institute of British Architects' unit dedicated to organising architectural and other design-related competitions.

The year 2015 in architecture involved some significant architectural events and new buildings.

The Contemporary Art Society is an organisation founded to encourage the awareness and appreciation of contemporary art in the United Kingdom. Using money donated by its friends and supporters, it purchases works of art which it then donates to public museums and galleries.

Hugh Giles Keyworth Broughton is an English architect and one of the world's leading designers of polar research facilities. His practice, Hugh Broughton Architects, was founded in 1995 and is based in London, works internationally. The practice has won several high profile international design competitions, including Halley VI Research Station, Juan Carlos 1 Spanish Antarctic Base, the Atmospheric Watch Observatory in Greenland for the US National Science Foundation and a new health facility on Tristan da Cunha, the world's most remote inhabited island. Current polar work, as of 2019, includes the redevelopment of Scott Base for Antarctica New Zealand. In 2019 the practice completed the conservation of the Grade I listed Painted Hall in the Old Royal Naval College, Greenwich, designed by Sir Christopher Wren in 1696.