The advocatus diaboli (Latin for Devil's advocate) is a former official position within the Catholic Church, the Promoter of the Faith: one who "argued against the canonization (sainthood) of a candidate in order to uncover any character flaws or misrepresentation of the evidence favoring canonization". [1]

In common language, the phrase 'playing devil's advocate' describes a situation where someone, given a certain point of view, takes a position they do not necessarily agree with (or simply an alternative position from the accepted norm), for the sake of debate or to explore the thought further using a valid reasoning that both disagrees with the subject at hand and proves their own point valid. Despite being medieval in origin, this idiomatic expression is one of the most popular present-day English idioms used to express the concept of arguing against something without actually being committed to the contrary view. [2]

During the canonization process employed by the Catholic Church, the 'Promoter of the Faith' (Latin : promotor fidei), popularly known as the Devil's advocate (advocatus diaboli), was a canon lawyer appointed by Church authorities to argue against the canonization of a candidate. [3] It was this person's job to take a skeptical view of the candidate's character, to look for holes in the evidence, to argue that any miracles attributed to the candidate were fraudulent, and so on. The Devil's advocate opposed 'God's advocate' (advocatus Dei; also known as the 'Promoter of the Cause'), whose task was to make the argument in favor of canonization. During the investigation of a cause, this task is now performed by the 'Promoter of Justice' (promotor iustitiae), who is in charge of examining the accuracy of the inquiry on the saintliness of the candidate. [4] The Promoter of the Faith remains a figure in the Congregation of the Causes of Saints and is also known as the Prelate Theologian. [5]

The office was established in 1587 during the reign of Pope Sixtus V. The first formal mention of such an officer is found in the canonization of St Lawrence Justinian under Pope Leo X (1513–1521). [6] Pope John Paul II reduced the power and changed the role of the office in 1983. In cases of controversy, the Vatican may still seek to solicit the testimony of critics of a candidate for canonization. One notable example of this was in 2003, when author Christopher Hitchens, an atheist and outspoken critic of Mother Teresa, was interviewed as part of her beatification hearings. [7] [8]

Saint Philomena was a young consecrated virgin whose remains were discovered on May 24–25, 1802, in the Catacomb of Priscilla. Three tiles enclosing the tomb bore an inscription, Pax Tecum Filumena, that was taken to indicate that her name was Filumena, the English form of which is Philomena. Philomena is the patron saint of infants, babies, and youth.

Beatification is a recognition accorded by the Catholic Church of a deceased person's entrance into Heaven and capacity to intercede on behalf of individuals who pray in his or her name. Beati is the plural form, referring to those who have undergone the process of beatification; they possess the title of "Blessed" before their names and are often referred to in English as "a Blessed" or, plurally, "Blesseds". 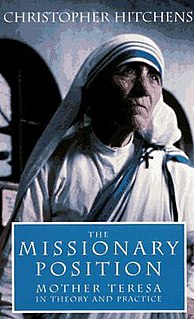 The Missionary Position: Mother Teresa in Theory and Practice is a book by the British-American journalist and polemicist Christopher Hitchens published in 1995. 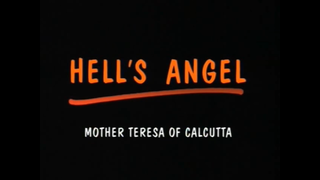 Hell's Angel is a television documentary programme criticising Mother Teresa which premiered in the UK on Channel 4's Without Walls arts strand on 8 November 1994. It was hosted by Christopher Hitchens, directed by Jenny Morgan, and produced by journalist Tariq Ali. Hitchens and Ali co-wrote the programme's script. Hitchens originally titled the documentary Sacred Cow, but the film's backers instead chose Hell's Angel as the title.

"Servant of God" is a term used for individuals by various religions for people believed to be pious in the faith's tradition. In the Catholic Church, it is the first step in designating an individual who is being investigated by the Church for possible canonization as a saint. In the Eastern Orthodox Church, this term is used to refer to any Eastern Orthodox Christian. The Arabic name Abdullah, the German name Gottschalk, and the Sanskrit name Devadasa are all variations of "servant of God".

A postulator is the person who guides a cause for beatification or canonization through the judicial processes required by the Roman Catholic Church. The qualifications, role and function of the postulator are spelled out in the Norms to be Observed in Inquiries made by Bishops in the Causes of Saints, which has been in effect since 7 February 1983. A petitioner seeking the beatification may appoint as postulator anyone, cleric or not, who is an expert in theological, canonical and historical matters, and versed in the practice of the Congregation for the Causes of Saints, subject to the approval of the bishop. The major religious orders, such as the Franciscans, Dominicans and Jesuits, appoint members of their orders as postulators-general who are available to act for petitioners in causes and who develop reputations as experts in their field. The later stage of a cause requires the postulator to reside in Rome, which also favors the assignment of the postulator's role to such a postulator-general, since most religious orders maintain their headquarters in Rome.

Pedro Calungsod, also known as Peter Calungsod and Pedro Calonsor, was a Catholic Filipino migrant, sacristan and missionary catechist who, along with the Spanish Jesuit missionary Diego Luis de San Vitores, suffered religious persecution and martyrdom in Guam for their missionary work in 1672.

Jaime Hilario Barbal – born Manuel Barbal i Cosán – was a Catalan Roman Catholic and a professed religious brother from the Institute of the Brothers of the Christian Schools. He served for almost two decades as a teacher in the schools that his order managed until being caught up in the turmoil of the Spanish Civil War that saw the forces of the Second Spanish Republic execute him.

Mateo Elías Nieves Castillo was a Mexican Roman Catholic priest who was also a member of the Order of Saint Augustine who assumed the name of Elias del Socorro when he became a member of the order.

Salomone Leclercq – born Guillaume-Nicolas-Louis Leclercq – was a French Roman Catholic professed religious who was killed during the French Revolution for his refusal to swear an oath of allegiance to the new government. Leclercq assumed the religious name of "Salomone" after he was admitted as a professed member of the De La Salle Brothers.

The Martyrs of Tlaxcala were three Mexican Roman Catholic teenagers from the state of Tlaxcala: Cristobal and the two companions Antonio and Juan. The three Teenagers were converts from the indigenous traditions of their families to the Roman Catholic faith and received their educations from the Order of Friars Minor who baptized them and evangelized in the area. Their activism and evangelical zeal led to their deaths at the hands of those who detested their newfound faith and perceived them as dangers to their values and rituals.

The Martyrs of Natal were a group of 30 Portuguese Roman Catholic individuals – two of them priests – killed in northern Brazil in massacres that a large group of Dutch Calvinists led. One priest was a Brazilian Jesuit missionary, while the other priest was an evangelizer himself. The others were all lay Catholics, most of them anonymous members of the Church, some of them children.

Luigi Versiglia, S.D.B. was an Italian Roman Catholic prelate and professed member from the Salesians of Don Bosco who served as the first Apostolic Vicar of Shaoguan from 1920 until his murder. He was also a former novice master noted for his strict austerities and discipline but for his loving and compassionate care of the poor and defenceless. He led the first Salesian expedition to China in 1906 and remained there until his death functioning for the people in various capacities such as a gardener and barber.