Emma Wood State Beach is a California State Beach in Ventura, California. It is located on the Santa Barbara Channel on the west side of the Ventura River estuary and south of the railroad tracks of the Coast Line and the US Highway 101 freeway. [1]

The beach is named after Emma Grubb Wood who once owned the 8,000 acres (3,237 ha) Taylor Ranch. The beach is popular for walking, fishing, swimming, and surfing. It also includes a primitive campground for recreational vehicles and the remains of World War II artillery emplacements.

The park is named for Emma Grubb Wood (May 23, 1881-September 19, 1944). Wood was the daughter of Alice Taylor Grubb, the owner of the Taylor Ranch (originally the Rancho Cañada de San Miguelito), an 8,000-acre sheep ranch on which oil was discovered in the 1930s. When Alice Taylor Grubb died in 1936, she left the ranch to her daughter Alice and son Percy. Percy, who was unmarried, committed suicide in December 1937 by carbon monoxide poisoning in a garage owned by Emma Wood's husband, Adrian "Buddy" Wood. [2] [3]

Wood died in 1944 in Carpinteria. At the time of her death, her land holdings, which included the Taylor Ranch, were valued at $8 million. [4] She was buried at Ivy Lawn Cemetery in Ventura. [5]

The Wood property and the adjoining Seaside Wilderness Park (owned by the City of Ventura) include multiple ecosystems, including sand dunes, a flood plain, cobblestone beach, riparian woodland, and wetlands. [10] At the eastern edge of the beach, the Ventura River estuary attracts a variety of wildlife, including great blue herons. [9] A total of 300 plant species and 233 species of birds have been identified in the area. [10] The Ocean's Edge Trail runs through both the Wood and Seaside properties. [10] Dolphins are also sometimes seen off the coast from the beach; the Los Angeles Times in 1997 wrote that Emma Wood is the "best bet" for dolphin watching. [11]

The beach includes the remains of two artillery installations built in 1942 in response to the Bombardment of Ellwood, a Japanese submarine attack on the Ellwood Oil Field. [12]

The park also include a primitive campground for recreational vehicles. There are no sewage, water, or electricity connections, and no tent camping is allowed. [9] [13] 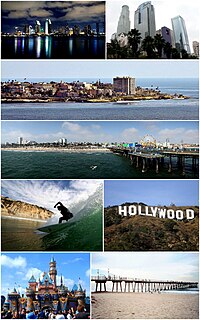 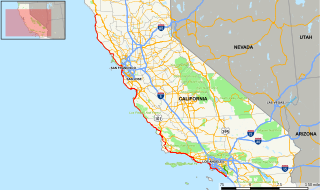 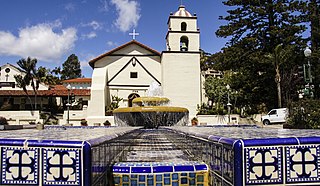 Ventura, officially the City of San Buenaventura, is the county seat of Ventura County, California, United States. The coastal site, set against undeveloped hills and flanked by two free-flowing rivers, has been inhabited for thousands of years. European explorers encountered a Chumash village, referred to as Shisholop, here while traveling along the Pacific coast. They witnessed the ocean navigation skill of the native people and their use of the abundant local resources from sea and land. In 1782, the eponymous Mission San Buenaventura was founded nearby, where it benefitted from the water of the Ventura River. The town grew around the mission compound and incorporated in 1866. The development of nearby oil fields in the 1920s and the age of automobile travel created a major real estate boom during which many designated landmark buildings were constructed. The mission and these buildings are at the center of a downtown that has become a cultural, retail, and residential district and visitor destination.

The Santa Clara River is 83 miles (134 km) long, and is one of the most dynamic river systems in Southern California. The river drains parts of four ranges in the Transverse Ranges System north and northwest of Los Angeles, then flows west onto the Oxnard Plain and into the Santa Barbara Channel of the Pacific Ocean.

The Santa Susana Pass, originally Simi Pass, is a low mountain pass in the Simi Hills of Southern California, connecting the San Fernando Valley and Los Angeles neighborhood of Chatsworth, to the city of Simi Valley and eponymous valley.

La Conchita is a small unincorporated community in western Ventura County, California, on U.S. Route 101 just southeast of the Santa Barbara county line. The ZIP Code is 93001, and the community is inside area code 805. 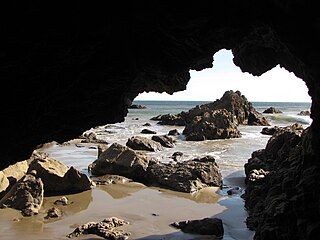 Leo Carrillo State Park is a state park in Los Angeles County, California, United States. Situated along the Malibu coast, the park is a component of Santa Monica Mountains National Recreation Area. With 1.5 miles (2.4 km) of beach, the parkland stretches into the Santa Monica Mountains. The park has expanded into Ventura County and also includes management of County Line Beach. California State Route 1 runs through the park, where it intersects with the western terminus of the Mulholland Highway. The 2,513-acre (1,017 ha) park was established in 1953. It is named for actor and conservationist Leo Carrillo (1881–1961), who served on the State Parks commission.

El Capitán State Beach is a protected beach in the state park system of California. It is located about 20 miles (32 km) west of downtown Santa Barbara. The beach is named after José Francisco Ortega, who retired from the Spanish Army in 1795 with the rank of captain and received the Rancho Nuestra Señora del Refugio as a land grant.

Harry Chandler was an American newspaper publisher and investor who became owner of the largest real estate empire in the U.S.

Ventura station is a passenger rail station in downtown Ventura, California. The station is served by Amtrak's Pacific Surfliner from San Luis Obispo to San Diego. Ten Pacific Surfliner trains serve the station daily. Of the 73 California stations served by Amtrak, Ventura was the 33rd-busiest in FY2010, boarding or detraining an average of approximately 125 passengers daily. The single platform is located on the south side of the tracks with a view of the Santa Barbara Channel and the Channel Islands. The Ventura Freeway is parallel with and on the north side of tracks.

Rancho Cañada de San Miguelito was a 8,877-acre (35.92 km2) Mexican land grant in present-day Ventura County, California, given in 1846 by Governor Pío Pico to Ramón Rodríguez. The name means valley of San Miguelito. The grant extended between the Pacific coast and the west bank of the Ventura River. On the east bank of the Ventura River was Rancho Cañada Larga o Verde and to the south was Rancho San Miguel, Rancho Ex-Mission San Buenaventura, and present day Ventura.

Newhall Ranch is a large scale master-planned community being developed in an unincorporated portion of Los Angeles County along the Santa Clara River in the westerly portion of the Santa Clarita Valley. The development was conceived in the 1980s by Newhall Land, a land management company which created the nearby master planned community of Valencia in the 1960s. During the decades the project has been in planning, it has faced legal actions, environmental concerns, and several changes in investors. The landmark California Environmental Quality Act, or CEQA, has been used to challenge the development even after it received planning approvals. While these lawsuits have been dismissed as merely tactics to block or delay the project by some, others claim the environmental law has led to a better-designed project while saving crucial habitat. 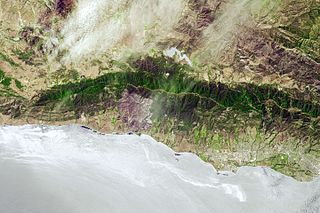 The Ventura Pier, formerly known as the Ventura Wharf and the San Buenaventura Wharf, is a wooden pier located on the Pacific Ocean in Ventura, California. The pier has been designated as Ventura Historic Landmark No. 20. It is the oldest pier in California. 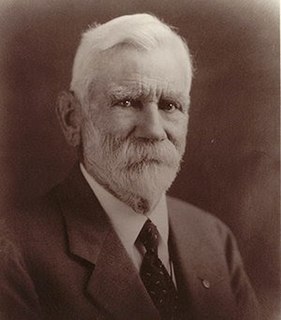