The Woodland Opera House, listed on the National Register of Historic Places and a California Historical Landmark, is one of four fully functioning 19th century opera houses in California. [3] It is a contributing property to the Downtown Historic District of Woodland, California.

Designed in 1885 by Thomas J. Welsh, a prominent San Francisco architect, for the amount of $28,000. It was the first opera house to serve the Sacramento Valley. [3] [4] [5] The builder for the community theater was Woodland contractor William Henry Curson. [6] Several years later in July 1892 a fire that started in Dead Cat Alley behind the Opera House destroyed much of what is now the Downtown Woodland Historic District, including the Opera House. There was uncertainty whether the House would be rebuilt when a locally renowned businessman, David N. Hershey, purchased the site. Other local businessmen supported the project in addition to Hershey. The Opera House was rebuilt between 1895 and 1896 by local contractor William H. Winne at the cost of $8,990. [3] Many of the materials from the original building were used including some of the partially standing walls.

By 1913 over 300 touring companies had appeared on its stage, and the Woodland Opera House was becoming an entertainment center for the region. Nevertheless, the venue closed in that year, after ticket sales declined and the theater lost a lawsuit by an attendee who had mistaken a loading door for an exit and fell three feet, breaking an arm.[ citation needed ]

The Opera house remained closed and unused for almost sixty years until 1971 when it was purchased by the Yolo County Historical Society, for a sum of $12,000. [7] After many local fund drives, donations, and monies from several different government agencies including the City of Woodland, restoration of the building began. Declared a state historic park in 1976, the building was later deeded to the State of California in 1980. [3] The Opera House reopened in 1989 after a $2,000,000 restoration project. [8] Extensive work was still done over the next nine years. Gary Worth, an architect from Woodland, oversaw the work and Brocchini & Associates of Oakland provided most of the materials for the restoration of the theater including antique wallpaper, lighting, and paint colors.

In the restoration the building was made structurally safe and "earthquake proofed". Central heat and air-conditioning, a sprinkler and alarm system, and handicap access were added. An annex was constructed for storage of mechanical equipment, as well as for administrative office space, a gift counter, the Mid Level Lounge, and a rooftop exterior deck. The interior restoration effort received an Award of Merit from the California Preservation Foundation and a Citation Award from the League of Historic American Theaters. [9]

The present Opera House is a simple, two-story, red brick structure. The structure is approximately 104 feet long by 60 feet wide; and its walls are 20 inches thick. A stage house on top of the north end of the Opera House (destroyed by fire in the 1930s) rose to a height of 60 feet above the street level. The building partially shares a common wall with the building on its western side

Its interior is an example of 19th-century American playhouses. The layout of the stage is a typical proscenium arch. It combines the horseshoe balcony with an uninterrupted semi-circular seating arrangement and large orchestra seating area like the common theme in Italian Renaissance-Revival theaters.

The Opera House holds mainstage subscriber productions from September to June. The theatre also has a summer youth theatre camp in August of each year and a Young People's Theatre Program that runs throughout the year. Along with many concerts throughout the year. Each production runs from 2 to 5 weekends. The theatre also works with the Yolo County Office of Education to provide very low ticket prices for students for school day performances of plays that are currently running.

In addition to play and drama productions, the Opera House is also used for a variety of music performances, comedians, and in rare cases even weddings.

Woodland is a city in and the county seat of Yolo County, California, located approximately 15 miles (24 km) northwest of Sacramento, and is a part of the Sacramento metropolitan area. The population was 55,468 at the 2010 census.

The Lobero Theatre is an historic building in Santa Barbara, California. The theater was originally built as an opera house, in a refurbished adobe school building, by Italian immigrant José Lobero in 1873. Located downtown at the corner of Anacapa and Canon Perdido streets, the Lobero Theatre is registered as a California Historical Landmark.

The Newberry Opera House, located in Newberry, South Carolina, is a fully restored historic building that is a live-performance space for popular artists, touring theatre companies, and local organizations. It is listed on the National Register of Historic Places in 1969.

Zamora is an unincorporated community in rural Yolo County, California, U.S., on Interstate 5 due west of Knights Landing. Its ZIP code is 95698 and its area code 530. It is in the northern part of the county. "Zamora District is bordered by County Road 10 to the north and County Road 16 to the south, County Road 85 on the west and Highway 113 on the east. In 1879 Zamora District included the areas of West Grafton,the eastern portion of Fairview and a small strip of East grafton. The Zamora District encompasses Oat Valley, along Oat Creek in the northwestern part of the district and Hungry Hollow which is in an area along the foothills west of Zamora."

Architectural Resources Group is a firm that was founded in 1980 by Bruce Judd and Steve Farneth in San Francisco, CA. It began by providing professional services in the fields of architecture and urban planning with particular expertise in the area of historic preservation. In 2000, David Wessel, a Principal of ARG, founded a separate conservation-contracting division, ARG Conservation Services which operates under the same roof as ARG. By 2005, the firm had expanded to a full-service architecture firm with 50+ employees. ARG also opened offices in Pasadena serving Southern California, and Portland, Oregon, serving the Pacific Northwest.

The Riley Center, also known as the Grand Opera House and formally as the Mississippi State University Riley Center for Education and Performing Arts, is a performing arts and conference center in Meridian, Mississippi. It was added to the National Register of Historic Places in 1972.

The Ramsdell Theatre is a historic playhouse theater building and opera house at 101 Maple Street in downtown Manistee, Michigan. The building was financed by local businessman and politician Thomas Jefferson Ramsdell. At the time the structure was built in 1902, it was considered one of the best opera and vaudeville buildings in the United States. It replaced the town's two previous opera houses which had been destroyed by fire, one in 1882 and the other in 1900. Besides producing plays the facility was later used as a movie theater. James Earl Jones started his acting career at the theater.

The Woodland Public Library is the oldest, and one of the last functioning Carnegie-funded libraries in California. It is on the National Register of Historic Places and is a contributing property of the Downtown Woodland Historic District.

The Gable Mansion is a Victorian mansion in Woodland, California, listed as a California Historical Landmark, that was built in 1885 for Amos and Harvey Gable, two Yolo County pioneers and ranchers. 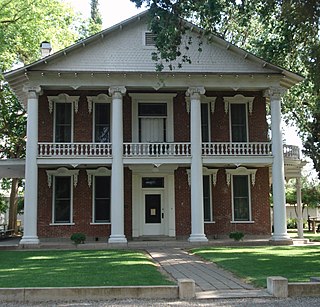 The Gibson House is a historic house that now serves as a museum in Woodland, California. It exemplifies several architectural styles, including Georgian Revival, Italianate and Neoclassical. It was listed in the National Register of Historic Places in 1976.

The building formerly known as the Yolo County Courthouse was a courthouse for the Superior Court of California in Yolo County in Woodland, California until 2015. The original building was erected in 1864, and was used for 37 years until condemned in 1911. The edifice, built in the same location in 1917, was listed on the National Register of Historic Places in 1987, and is also a contributing property in the Downtown Woodland Historic District.

Hotel Woodland is a historic hotel located in Woodland, California and designed by William Henry Weeks. The hotel is on the National Register of Historic Places, and is a contributing property of the Downtown Woodland Historic District.

The Porter Building is a historic building listed on the National Register of Historic Places located in the Downtown Historic District of Woodland, California.

The Superior Court of California, County of Yolo County, is the branch of the California superior court with jurisdiction over Yolo County.