Weaverville Joss House State Historic Park is a state park located in the center of the town of Weaverville, California. The site is a Taoist temple which is still in use, and is the oldest Chinese temple in California.

The original temple was built by Chinese goldminers during California's 1849 gold rush.

The current building, called The Temple among the Trees Beneath the Clouds (雲林廟), was built in 1874 to replace earlier structures which had been destroyed by fires. In 1934, much of the material in the building was taken during a robbery. The state decided that, in order to protect the historic nature of the material, a local resident, Moon Lim Lee, would be named trustee for the site. In 1956, the site officially became a state historic site.

In 1989, a box was left at the visitor's center. It contained one of the Chinese Guardian Lions which had been stolen in the 1934 theft. The state of California commissioned a new pair of dogs to place on display in the temple. The new dogs were created by traditional craftsmen in China.

Much of the material on display inside the temple includes temple equipment, objects of Chinese art, mining tools, and weapons used in the 1854 Tong War. The temple's patron saints are Xuantian Shangdi and Guan Di.

Each year, to celebrate the Chinese New Year, a lion dance is performed. The dance is also performed on every Fourth of July weekend.

The interior of the temple remains the same as it looked when it was built, although safety railings and electric lights have been added. On the grounds, there is a recently added parking lot, visitor's center, and reflecting pool. Worship is still practiced at the temple but to preserve the exterior of the temple grounds, no incense burning is permitted.

The temple is located at the southwest corner of Main Street (California State Route 299) and Oregon Street in Weaverville.

A Chinatown is an ethnic enclave of Chinese people located outside mainland China, Hong Kong, Macau, Singapore or Taiwan, most often in an urban setting. Areas known as "Chinatown" exist throughout the world, including Europe, North America, South America, Asia, Africa and Australasia. 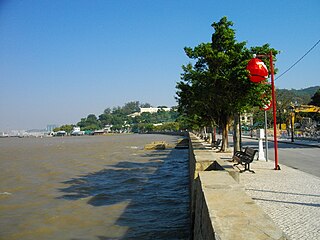 Coloane is an island in Macau that is united with the island of Taipa by an area of reclaimed land known as Cotai. It is located at the southern part of Macau. Administratively, the boundaries of the traditional civil parish of São Francisco Xavier are coterminous with that of Coloane. 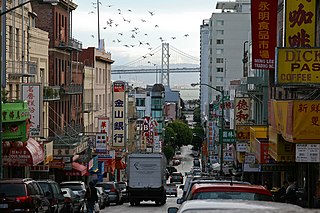 The Chinatown centered on Grant Avenue and Stockton Street in San Francisco, California, is the oldest Chinatown in North America and the largest Chinese enclave outside Asia. It is also the oldest and largest of the four notable Chinese enclaves within San Francisco. Since its establishment in 1848, it has been highly important and influential in the history and culture of ethnic Chinese immigrants in North America. Chinatown is an enclave that continues to retain its own customs, languages, places of worship, social clubs, and identity. There are two hospitals, several parks and squares, numerous churches, a post office, and other infrastructure. Recent immigrants, many of whom are elderly, opt to live in Chinatown because of the availability of affordable housing and their familiarity with the culture. San Francisco's Chinatown is also renowned as a major tourist attraction, drawing more visitors annually than the Golden Gate Bridge.

Thian Hock Keng, is a temple built for the worship of Mazu, a Chinese sea goddess, located in Singapore. It is the oldest and most important temple of the Hokkien (Hoklo) people in the country. Another shrine at the back is Buddhist dedicated to Guanyin, the Mahayana Buddhist bodhisattva of mercy.

The Chinese Historical Society of America is the oldest and largest archive and history center documenting the Chinese American experience in the United States. It is based in the Chinatown neighborhood of San Francisco, California.

The Shiseibyō (至聖廟) is a Confucian temple in the Wakasa district of Naha, Okinawa. It served for centuries as a major center of Chinese learning for the Ryūkyū Kingdom, and contains within its precincts the Meirindō, first public school in Okinawa.

The Oroville Chinese Temple (列聖宮) is a Chinese folk religious temple built in 1863 in Oroville, California. The temple is now owned by the City of Oroville and open to the public as a museum, and it also continues to be used occasionally for worship.

Kong Chow Temple is a temple dedicated to Guan Di, located in the Chinatown neighborhood of San Francisco, California, in the United States. 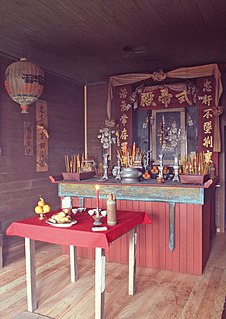 The Temple of Kwan Tai is a Chinese Taoist temple in Mendocino, California, dedicated to Kwan Tai. It is California Historical Landmark #927.

The Taoist Temple at No. 12 China Alley in Hanford, in Kings County, California, dates from 1893. It was listed on the U.S. National Register of Historic Places (NRHP) in 1972.

The Tin How Temple is the oldest extant Taoist temple in San Francisco's Chinatown, and one of the oldest still-operating Chinese temples in the United States. It is dedicated to the Chinese sea goddess Mazu, who is known as Tin How in Cantonese.

San Chaopho Suea or San Chaopho Suea Phra Nakhon (ศาลเจ้าพ่อเสือพระนคร), usually shortened to San Chaopho Suea is a Chinese joss house located at 468 Tanao Road, San Chaopho Suea Sub-district, Phra Nakhon District in the old town Bangkok near Sao Chingcha and Wat Mahannapharam with features the Southern Chinese architectural style. It is the shrine of Chaopho Suea, according to the ancient Chinese belief and it is one of the most respected Chinese shrines in Bangkok and Thailand alike Wat Mangkon Kamalawat in Chinatown, especially during the Chinese New Year.

Tian Hou Gong Temple is a Chinese temple situated in Jalan Balik Bukit in the north of the Chinatown of Kuala Terengganu, Terengganu, Malaysia. 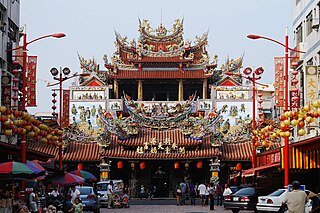 Xingang Fengtian Temple, sometimes romanized as Fongtian Temple, is a temple located in Xingang Township, Chiayi County, Taiwan. The temple is a county-level monument and the destination of the annual Dajia Mazu Pilgrimage.