Kenneth Hahn State Recreation Area, or Kenneth Hahn Park, is a state park unit of California in the Baldwin Hills Mountains of Los Angeles. The park is managed by the Los Angeles County Department of Parks and Recreation. [1] As one of the largest urban parks and regional open spaces in the Greater Los Angeles Area, many have called it "L.A.'s Central Park". [2] The 401-acre (162 ha) park was established in 1984. [3]

The Baldwin Hills were part of the homeland of the Tongva people, inhabited by them for over 8,000 years. [4] In the 19th century the area was part of the Spanish and Mexican Ranchos of California era, with the Rancho Rincon de los Bueyes and Rancho La Cienega o Paso de la Tijera in and around the present day park. As Los Angeles quickly grew during the 20th century, only the rugged terrain of this section of the Baldwin Hills protected it from being developed.

In 1932 the area east of the park was used as the site of the first Olympic Village ever built, for the 1932 Summer Olympics in the 10th Olympiad, which Los Angeles hosted. [5] To serve as a continual reminder of the events, 140 trees have been planted together on the hills where the 1932 Olympics took place, with each tree representing a nation that took part in the 1984 Olympics.

Between 1947 and 1951 the Baldwin Hills Reservoir was built in the hills here. In 1963 the reservoir's dam collapsed disastrously, washing away residences in the canyon and flooding the landmark Baldwin Hills Village (now Village Green). The news coverage of the disaster was the first time aerial footage was televised live. [6] The empty bowl of the reservoir is still visible.

In the late 1940s the city transportation master plan included building a new north-south freeway, the aborted Laurel Canyon Freeway-SR-170, that would have bisected the Baldwin Hills and park site where La Cienega Boulevard currently crosses the hills.

In 1977 Los Angeles County Supervisor Kenneth Hahn convinced Vice President Walter Mondale to reuse the land, from former oil-drilling sites, for a public open space park. At the time the area was also a very popular spot for the then new sport of motocross, locals calling it 'Motorcycle Hill'. Land was acquired for the park, and includes the Ballona Creek watershed that is a wildlife corridor from the hills through Culver City to the Ballona Wetlands.

The park is named after Los Angeles County Board of Supervisors member Kenneth Hahn, also the father of James Hahn, former Los Angeles mayor, and Janice Hahn, former Los Angeles City Council member and later a U.S. Member of Congress. The Kenneth Hahn State Recreation Area first opened in 1983 as the Baldwin Hills State Recreational Area, and was later renamed in 1988 to honor Supervisor Hahn and his preservation efforts there. Also since its opening the park has been expanded, as some of the adjacent oil wells have 'dried up' and the oil field land cleaned up and acquired.

Hahn Park offers walking and hiking trails with some of the area's best scenic vistas:

The park is a destination for picnics and family gatherings, having 100 picnic tables in various picnic grounds around the park. The park also has four playgrounds, a half basketball court, a multi-purpose field, and a sand volleyball court. Garden areas include a Japanese garden with a stream and waterfall. In 2017, a 9-hole disc golf course was added along the north bowl.

There is a lake for fishing, stocked monthly with trout or catfish, depending on the weather season. [7]

Since 2004, the park, primarily the bowl, has been the site of the Southern California USATF Cross Country Championships. [8] [ failed verification ]

The park's native habitat is the Coastal sage scrub plant community, with oak woodlands in northern arroyos and bunch grass grasslands on the southwestern windy and exposed terrain. 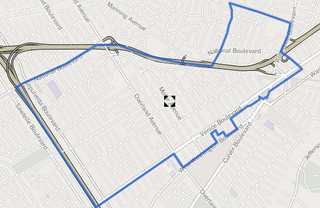 Palms is a highly diverse, densely populated community in the Westside region of Los Angeles, California, founded in 1886 and the oldest neighborhood annexed to the city, in 1915. The 1886 tract was marketed as an agricultural and vacation community. Today it is a primarily residential area, with many apartment buildings, ribbons of commercial zoning and a single-family residential area in its northwest corner. 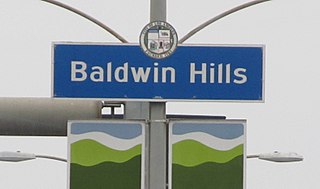 Baldwin Hills is a neighborhood within the South Los Angeles region of Los Angeles California. It is home to Kenneth Hahn State Regional Park and to Village Green, a National Historic Landmark. As of end of 2020, Baldwin hills ranks # 2 among top 10 richest black communities in US, with an average family income of $157,033, and it has been nicknamed as Black Beverly Hills after Black musicians and actors have moved into the area. 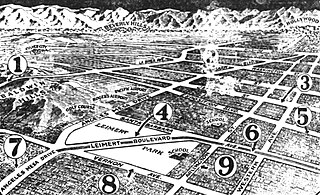 La Brea Avenue is a prominent north-south thoroughfare in the City of Los Angeles and in Los Angeles County, California. 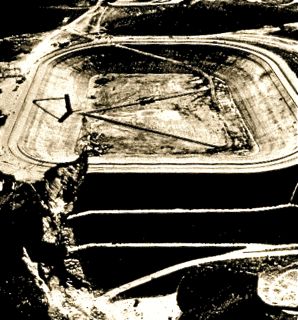 The Baldwin Hills Dam disaster occurred on December 14, 1963, in the Baldwin Hills neighborhood of South Los Angeles, when the dam containing the Baldwin Hills Reservoir suffered a catastrophic failure and flooded the residential neighborhoods surrounding it. It began with signs of lining failure, followed by increasingly serious leakage through the dam at its east abutment. After three hours, the dam breached, with a total release of 250 million US gallons (950,000 m3), resulting in five deaths and the destruction of 277 homes. Vigorous rescue efforts averted a greater loss of life.

Baldwin Vista is a neighborhood located next to the Baldwin Hills Mountains in the South region of the city of Los Angeles, California. It is located in the western Baldwin Hills, and partially borders on Culver City. 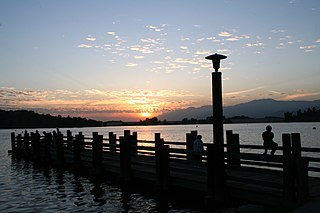 Rancho Rincón de los Bueyes was a 3,127-acre (12.65 km2) land grant in present-day Los Angeles County, California given in 1821 to Bernardo Higuera and Cornelio Lopez by Pablo Vicente de Sola, the Spanish Governor of Alta California. In 1843, this Spanish grant was confirmed by Mexican Governor Manuel Micheltorena. Rincón, translated from the Spanish, means corner or nook, and Bueyes are oxen or steer.

Alsace is an archaic place name near the development known as Playa Vista, Los Angeles, California. It lies at an elevation of 16 feet.

Rancho Las Cienegas was a 4,439-acre (17.96 km2) Mexican land grant in present-day Los Angeles County, California given in 1823 to Francisco Avila by Governor Luis Antonio Argüello. "La Cienega" is derived from the Spanish word cienaga, which means swamp or marshland and refers to the natural springs and wetlands in the area between the Baldwin Hills range and Baldwin Hills district, and Beverly Hills. The rancho was north of Rancho La Cienega o Paso de la Tijera and east of present-day La Cienega Boulevard between Wilshire Boulevard and Jefferson Boulevard. The Los Angeles River would periodically change course historically, and flowed through the rancho's lowlands to Ballona Creek and the Santa Monica Bay until 1825, when it returned to the flowing through Rancho San Pedro to San Pedro Bay. 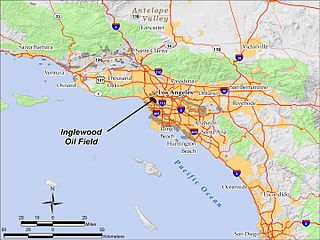 The Inglewood Oil Field in Los Angeles County, California, is the 18th-largest oil field in the state and the second-most productive in the Los Angeles Basin. Discovered in 1924 and in continuous production ever since, in 2012 it produced approximately 2.8 million barrels of oil from some five hundred wells. Since 1924 it has produced almost 400 million barrels, and the California Department of Oil, Gas and Geothermal Resources (DOGGR) has estimated that there are about 30 million barrels remaining in the field's one thousand acres, recoverable with present technology.