The John Muir National Historic Site is located in the San Francisco Bay Area, in Martinez, Contra Costa County, California. It preserves the 14-room Italianate Victorian mansion where the naturalist and writer John Muir lived, as well as a nearby 325-acre (132 ha) tract of native oak woodlands and grasslands historically owned by the Muir family. The main site is on the edge of town, in the shadow of State Route 4, also known as the "John Muir Parkway." [7]

In 1897, for the sum of $10, Muir and Louisa ceded a right of way to the San Francisco and San Joaquin Valley Railroad. [8] The document describes the land upon which the Alhambra Trestle is located. [8] The railway was completed in 1900 and used by the Muirs to ship their fruit. [8]

While living here, Muir realized many of his greatest accomplishments, co-founding and serving as the first president of the Sierra Club, [9] in the wake of his battle to prevent Yosemite National Park's Hetch Hetchy Valley from being dammed, playing a prominent role in the creation of several national parks, writing hundreds of newspaper and magazine articles and several books expounding on the virtues of conservation and the natural world, and laying the foundations for the creation of the National Park Service in 1916.

The home contains Muir's "scribble den," as he called his study, and his original desk, where he wrote about many of the ideas that are the bedrock of the modern conservation movement. [10]

The Muir house was documented by the Historic American Buildings Survey in 1960. [11]

In 1988 nearby Mount Wanda Nature Preserve (named for one of John Muir's two daughters) was added to the Historic Site. [12]

The John Muir National Historic Site offers a biographical film, tours of the house and nature walks on Mount Wanda. [13] 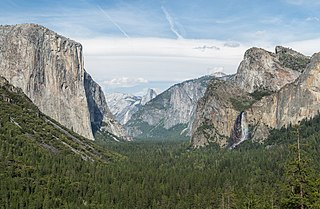 Yosemite National Park is an American national park in Northern California, surrounded on the southeast by Sierra National Forest and on the northwest by Stanislaus National Forest. The park is managed by the National Park Service and covers an area of 748,436 acres and sits in four counties: centered in Tuolumne and Mariposa, extending north and east to Mono and south to Madera County. Designated a World Heritage Site in 1984, Yosemite is internationally recognized for its granite cliffs, waterfalls, clear streams, giant sequoia groves, lakes, mountains, meadows, glaciers, and biological diversity. Almost 95% of the park is designated wilderness. 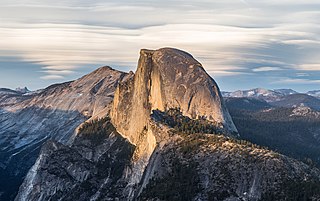 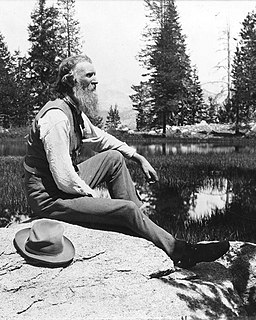 Human habitation in the Sierra Nevada region of California reaches back 8,000 to 10,000 years ago. Historically attested Native American populations, such as the Sierra Miwok, Mono and Paiute, belong to the Uto-Aztecan and Utian phyla. In the mid-19th century, a band of Native Americans called the Ahwahnechee lived in Yosemite Valley. The California Gold Rush greatly increased the number of non-indigenous people in the region. Tensions between Native Americans and white settlers escalated into the Mariposa War. As part of this conflict, settler James Savage led the Mariposa Battalion into Yosemite Valley in 1851, in pursuit of Ahwaneechees led by Chief Tenaya. The California state military forces burned the tribe's villages, destroyed their food stores, killed the chief's sons, and forced the tribe out of Yosemite. Accounts from the Mariposa Battalion, especially from Dr. Lafayette Bunnell, popularized Yosemite Valley as a scenic wonder. 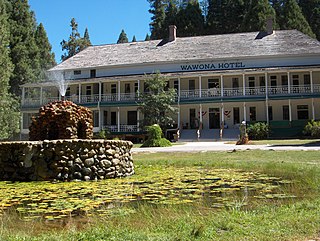 The Wawona Hotel is a historic hotel located within southern Yosemite National Park, in California. It was declared a National Historic Landmark in 1987, and is on the National Register of Historic Places. 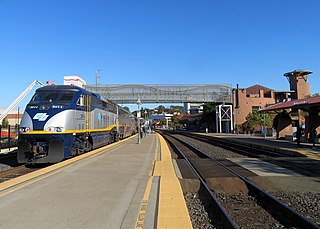 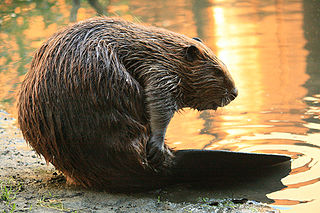 Muir House may refer to: 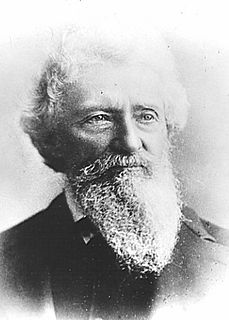 John Theophil Strentzel was a Polish-born physician who gained fame as a pioneer in the area of experimental California horticulture. He is best known as the father-in-law of writer and environmental activist John Muir.

Martinez Library is a historic library located in downtown Martinez, California that is part of the Contra Costa County Library system.

The Vicente Martinez Adobe is an historic adobe house near Martinez, California. The house was built in 1849 by Vicente J. Martinez on the Rancho El Pinole, a land grant that had been given to his father, Ygnacio Martinez, in 1836. It was the first of its kind built in Contra Costa County. In 1853 the adobe was sold Edward Franklin, after whom the canyon where the adobe sits was named. The adobe became known as the Franklin Canyon Adobe.

Louis Lorenz Stein Jr., often referred to as Louie, was an American pharmacist, California East Bay historian and archivist. He was best known for founding the Arlington Pharmacy in Kensington, California, the Pharmacy Museum at Columbia State Historic Park and donating his collection of historical materials to the Contra Costa County Historical Society. 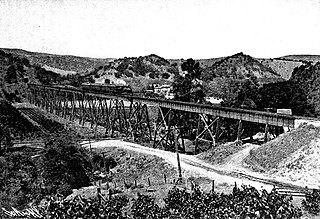 The Muir Trestle, or Alhambra Trestle, is a railway trestle bridge in Martinez, California located within the John Muir National Historic Site. It is owned and operated by BNSF Railway and carries their Stockton Subdivision. The trestle spans 1,600 feet (490 m) in length, 75 feet (23 m) above the Alhambra Valley.