The Academy Award for Best Adapted Screenplay is one of the Academy Awards, also known as the Oscars. They are overwhelmingly considered by both entertainment industry insiders as well as the movie-going public to be the most prestigious film awards in the United States. The Oscar for Best Adapted Screenplay is awarded each year to the writer of a screenplay adapted from another source (as opposed to the Oscar for best original screenplay, for which no additional works are cited by the author(s) as forming the basis for their screenplay, either in part or as a whole). The most frequently adapted media are novels, but other adapted narrative formats include plays, musicals, and other theatrical works; short stories; nonfiction books; TV series; and even other films, for example, foreign language films. All sequels are automatically considered adaptations by this standard, since the sequel must be based on the story set forth in the original film.

See also: the Academy Award for Best Original Screenplay, a similar award for screenplays that are not adaptations. As of the 2020 ceremony, Taika Waititi is the most recent winner in this category for Jojo Rabbit .

The first person to win twice in this category was Joseph L. Mankiewicz, who won the award in two consecutive years, 1949 and 1950. Others to win twice in this category include: George Seaton, Robert Bolt (who also won in consecutive years), Francis Ford Coppola, Mario Puzo, Alvin Sargent, Ruth Prawer Jhabvala, Michael Wilson and Alexander Payne. Payne won both awards as part of a writing team, with Jim Taylor for Sideways and Jim Rash and Nat Faxon for The Descendants . Michael Wilson was blacklisted at the time of his second Oscar, so the award was given to a front (novelist Pierre Boulle). However, the Academy officially recognized him as the winner several years later. [1]

Frances Marion ( The Big House ) was the first woman to win in the category.

Pierre Collings and Sheridan Gibney ( The Story of Louis Pasteur ) were the first to win for adapting their own work.

Mario Puzo is the one of two writers whose work has been adapted and resulted in two wins. Puzo's novel The Godfather resulted in wins in 1972 and 1974 for himself and Francis Ford Coppola. The other is E. M. Forster, whose novels A Room with a View and Howards End resulted in wins for Ruth Prawer Jhabvala.

Larry McMurtry is the only person who has won for adapting someone else's work ( Brokeback Mountain ), and whose own work has been adapted by someone else resulting in a win ( Terms of Endearment ).

Peter Jackson and Fran Walsh ( The Lord of the Rings: The Return of the King ) are the only married couple to win.

James Ivory ( Call Me by Your Name ) is the oldest person to receive the award at age 89. Charlie Wachtel ( BlacKkKlansman ) is the youngest at age 32.

Taika Waititi (Jojo Rabbit) is the first person of Māori descent to receive the award.

Emma Thompson ( Sense and Sensibility ) is the only winner who has also won for acting. [2] Winners Billy Bob Thornton ( Sling Blade ) and John Huston ( The Treasure of the Sierra Madre ) have been nominated for acting but not won.

Charles Schnee ( The Bad and the Beautiful ), Billy Bob Thornton ( Sling Blade ), and Bill Condon ( Gods and Monsters ) are the only winners whose films were not nominated for Best Picture.

Scott Frank, James Mangold, and Michael Green, writers of Logan , are the first to be nominated for a film based on superhero comic books (the X-Men).

Winners are listed first in colored row, followed by the other nominees.

The following writers have received three or more nominations:

Mario Gianluigi Puzo was an American author, screenwriter and journalist. He is known for his crime novels about the Italian-American mafia, most notably The Godfather (1969), which he later co-adapted into a trilogy directed by Francis Ford Coppola. He received the Academy Award for Best Adapted Screenplay for the first film in 1972 and Part II in 1974. Puzo also wrote the original screenplay for the 1978 Superman film. His final novel, The Family, was released posthumously in 2001.

Ruth Prawer Jhabvala, was a German-born British and American Booker prize-winning novelist, short story writer and two-time Academy Award-winning screenwriter. She is perhaps best known for her long collaboration with Merchant Ivory Productions, made up of director James Ivory and producer Ismail Merchant.

The 47th Academy Awards were presented Tuesday, April 8, 1975, at the Dorothy Chandler Pavilion in Los Angeles, California, honoring the best films of 1974. The ceremonies were presided over by Bob Hope, Shirley MacLaine, Sammy Davis Jr., and Frank Sinatra. This was the last year NBC aired the ceremonies before ABC secured broadcasting rights, which they still hold to this day.

The 35th Academy Awards, honoring the best in film for 1962, were held on April 8, 1963, at the Santa Monica Civic Auditorium in Santa Monica, California, hosted by Frank Sinatra.

Frank Tarloff was a blacklisted American screenwriter who won an Academy Award for Best Original Screenplay for Father Goose. 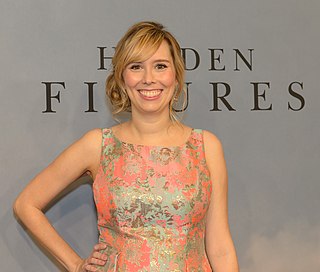 Allison Schroeder is an American screenwriter. She co-wrote the film Hidden Figures with Theodore Melfi, earning a nomination for the Academy Award for Best Adapted Screenplay.