Narkh is a district of about 480 square kilometres (185 sq. mi.) in the east of Wardak Province, Afghanistan. Its population was estimated at 57,000 in 2002, consisting of about 99% Pashtuns, % Tajiks and 1% Hazara. The district centre is Kane Ezzat.

During the presidency of Mohammed Daoud Khan in the 1970s, Narkh District was planted with many fruit trees; however, these have since dried up in droughts.

It was reported on 17 November 2009 that Afghan and NATO forces killed one farmer and a militant during an operation. [1]

It was reported on 20 November that a suspected militant was detained when several compounds used by the Taliban for IED and small arms attacks were searched. The incident occurred in Darmandyan. [2] 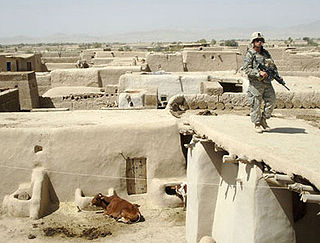 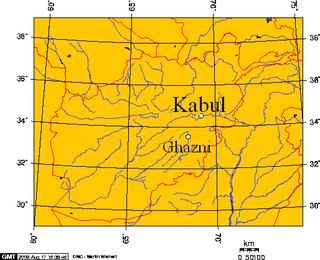 The National Directorate of Security is the national intelligence and security service of Afghanistan. With its headquarters in Kabul, NDS has field offices and training facilities in all 34 provinces of Afghanistan. It is part of the Afghan National Security Forces (ANSF).

The War in Afghanistan is an ongoing war following the United States invasion of Afghanistan when the United States and its allies successfully drove the Taliban from power in order to deny al-Qaeda a safe base of operations in Afghanistan. After the initial objectives were completed, a coalition of over 40 countries formed a security mission in the country called International Security Assistance Force of which certain members were involved in military combat allied with Afghanistan's government. The war has mostly consisted of Taliban insurgents fighting against the Afghan Armed Forces and allied forces; the majority of ISAF/RS soldiers and personnel are American. The war is code-named by the U.S. as Operation Enduring Freedom (2001–14) and Operation Freedom's Sentinel (2015–present).

The April 2012 Afghanistan attacks took place on Sunday, 15 April 2012, at around 13:00 local time when heavily armed Taliban insurgents and suicide bombers launched multiple coordinated attacks throughout Afghanistan. Insurgents launched the 2012 spring offensive on multiple locations, including government buildings, military bases, and embassies. Attacks occurred in four Afghan provinces, including Kabul and Paktia. Different reports attribute responsibility for the attacks to either Taliban or the Haqqani network although the Taliban have claimed responsibility.

Zambar is a village in Sabari District of northern Khost Province of southeastern Afghanistan, although it appears to have formerly been in neighboring Paktia Province. It is located roughly 30 miles (48 km) north as the crow flies of the city of Khost but much further by road, and about the same distance from the Pakistani border. The Zambar Toy flows past the village.

On 28 June 2011, an attack on the Inter-Continental Hotel, Kabul by gunmen and suicide bombers, and an ensuing five-hour siege, left at least 21 people dead, including all 9 attackers. Responsibility was claimed by the Taliban.