Last updated December 18, 2020
Not to be confused with Bagram District.
District in Kabul Province, Afghanistan

The Afghan Ministry of Rural Rehabilitation & Development (MRRD), along with the UNHCR and Central Statistics Office (CSO) of Afghanistan, estimates the population of the district to be around 68,287. [1] According to AIMS and UNHCR, Pashtuns make up the majority of the population, followed by ethnic Tajiks. [2]

The district borders Kabul to the west, Deh Sabz to the north, Surobi to the east, and Khaki Jabbar, Musayi and Char Asiab districts to the south. Bagrami district is a green area with abundant agricultural activities. Many of its residents work in Kabul because of the communities' proximity to one another.

Bagrami district is developing rapidly. The Bagrami Industrial Park, which is part of a major industry in Afghanistan, is part of the rebuilding process. Health care and education are relatively good, and are gradually improving.

Mohammed Zahir Shah was the last King of Afghanistan, reigning from 8 November 1933 until he was deposed on 17 July 1973. He expanded Afghanistan's diplomatic relations with many countries, including with both Cold War sides. In the 1950s, Zahir Shah began modernizing the country, culminating in the creation of a new constitution and a constitutional monarchy system. His long reign was marked by peace in the country that was lost afterwards.

The following lists events that happened during 1991 in Afghanistan.

The following lists events that happened during 1996 in Afghanistan. 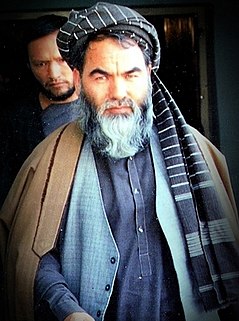 Abdul Ali Mazari was the political leader of the Hezb-e Wahdat party during and following the Soviet–Afghan War. Mazari was an ethnic Hazara, and believed the solution to the internal divisions in Afghanistan was in a federal system of governance, with each ethnic group having specific constitutional rights and able to govern their own land and people. He was murdered by the Taliban in 1995, and posthumously given the title ‘Martyr Of National Unity’ in 2016. He supported equal representation of all ethnic groups of Afghanistan, especially Hazaras, who are still being persecuted in Afghanistan. 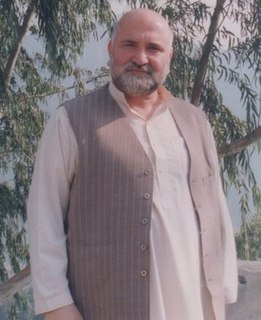 Ahmad Shah Ahmadzai is an Afghan politician. He served as the prime minister of Afghanistan from 1995 to 1996. He is an ethnic Pashtun from the Ahmadzai sub-tribe.

Bati Kot is a district in the east of Nangarhar Province, Afghanistan. Its population, which is 100% Pashtun, was estimated at 300,000 in 2017, of whom 25,500 were children under 12. The district is within the heartland of the Mohmand tribe of Pashtuns. The district centre is Nader Shah Kot. 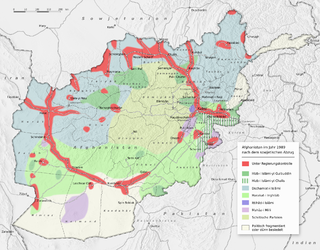 Hajji Din Mohammad also known as Azizullah Din Mohammad is a politician in Afghanistan who served as the Governor of Nangarhar Province followed by Governor of Kabul Province. He is currently the Chairman of Peace and Development Islamic Party. He has been involved in the peace and reconciliation process between the Afghan Government and the Taliban and is currently the deputy of High Council for National Reconciliation. Haji Din Mohammad comes from a distinguished Pashtun family "Arsala" The Arsala family is part of the Jabar Khel. He is also the elder brother of late Hajji Abdul Qadir and Abdul Haq His great-grandfather, Wazir Arsala Khan, served as Foreign Minister of Afghanistan in 1869. One of Arsala Khan's descendants, Taj Mohammad Khan, was a general at the Battle of Maiwand. Another descendant, Abdul Jabbar Khan, was Afghanistan’s first Ambassador to Russia. 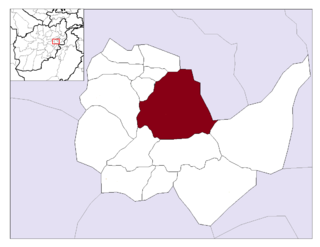 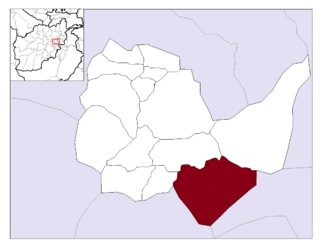 The following lists events that happened during 1989 in Afghanistan.

Hajji Muhammad Arif Zarif was a prominent Afghan politician and businessman. He graduated from Afghanistan's military academy. He was the chairman of the Afghanistan Chamber Reform Commission and a member of the Afghan National Parliament, as well as Chairman of the Parliamentary Economics Committee and owner of several private companies. He was a wealthy businessman that owned many properties and enterprises. Arif Zarif was amongst a delegation of politicians and lawmakers killed in the 2007 Baghlan sugar factory bombing, a suicide attack in Baghlan, northern Afghanistan, on November 6, 2007. He was buried in a state ceremony in Kabul three days later.

Habibia High School is a school in southwestern Kabul, Afghanistan which has educated many of the former and current Afghan elite, including President Ashraf Ghani and musician Ahmad Zahir. It was founded by King Habibullah Khan in 1903.

General Mohammad Nabi Azimi was the Deputy Defense Minister of the Democratic Republic of Afghanistan (DRA) who played a critical role in the fall of President Mohammad Najibullah. An ethnic Mohammadzai Pashtun, he belonged to the Parcham faction of the PDPA. 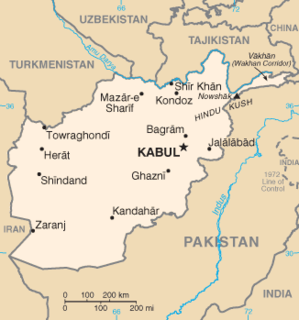 The 1973 Afghan coup d'etat was the relatively bloodless overthrow of King Mohammed Zahir Shah on 17 July 1973 and the establishment of the Republic of Afghanistan. The non-violent coup was executed by the then-Army commander and royal Prince, Mohammed Daoud Khan who led forces in Kabul along with then-chief of staff General Abdul Karim Mustaghni to overthrow the monarchy while the King was abroad in Ischia, Italy. Daoud Khan was assisted by leftist Army officers and civil servants from the Parcham faction of the PDPA, including Air Force colonel Abdul Qadir. King Zahir Shah decided not to retaliate and he formally abdicated on August 24, remaining in Italy in exile. More than two centuries of royal rule ended.