The 18th century lasted from January 1, 1701 (MDCCI) to December 31, 1800 (MDCCC). During the 18th century, elements of Enlightenment thinking culminated in the American, French, and Haitian revolutions. During the century, slave trading and human trafficking expanded across the shores of the Atlantic, while declining in Russia, [1] China, [2] and Korea. Revolutions began to challenge the legitimacy of monarchical and aristocratic power structures, including the structures and beliefs that supported the slave trade. The British Industrial Revolution began, leading to radical changes in human society and the environment.

Western historians have occasionally defined the 18th century otherwise for the purposes of their work. For example, the "short" 18th century may be defined as 1715–1789, denoting the period of time between the death of Louis XIV of France and the start of the French Revolution, with an emphasis on directly interconnected events. [3] [4] To historians who expand the century to include larger historical movements, the "long" 18th century [5] may run from the Glorious Revolution of 1688 to the Battle of Waterloo in 1815 [6] or even later. [7]

The period is also known as the "century of lights" or the "century of reason". In continental Europe, philosophers dreamed of a brighter age. For some, this dream turned into a reality with the French Revolution of 1789, though this was later compromised by the excesses of the Reign of Terror. At first, many monarchies of Europe embraced Enlightenment ideals, but in the wake of the French Revolution they feared loss of power and formed broad coalitions for counter-revolution.

The 18th century also marked the end of the Polish–Lithuanian Commonwealth as an independent state. Its semi-democratic government system was not robust enough to rival the neighboring monarchies of the Kingdom of Prussia, the Russian Empire, and the Austrian Empire which divided the Commonwealth territories between themselves, changing the landscape of Central Europe and politics for the next hundred years.

The Ottoman Empire experienced an unprecedented period of peace and economic expansion, taking part in no European wars from 1740 to 1768. As a consequence, the empire was not exposed to Europe's military improvements of the Seven Years' War (1756–1763). The Ottoman Empire military may have fallen behind and suffered defeats against Russia in the second half of the century. In Southwest and Central Asia, Nader Shah led successful military campaigns and major invasions, which indirectly led to the founding of the Durrani Empire.

European colonization of the Americas and other parts of the world intensified and associated mass migrations of people grew in size as the Age of Sail continued. European colonization intensified in present-day Indonesia, where the Dutch East India Company gained more power from the Mataram Sultanate. Mainland Southeast Asia would be embroiled in the Konbaung-Ayutthaya Wars and the Tay Son rebellion, while in East Asia, the century marked the High Qing era and the continual seclusion policies of the Tokugawa shogunate.

Great Britain became a major power worldwide with the French and Indian War in the 1760s and the conquest of large parts of India, especially Bengal; they later fought in the Anglo-Mysore Wars by the end of the century. However, Britain lost many of its North American colonies after the American Revolution and Indian Wars. In North America, the defeat of the British resulted in the formation of an independent United States. Great Britain laid claim to the continent of Australia under the justification of terra nullius and began its colonisation from 1788 onwards.

In the Indian subcontinent, the death of the Mughal Emperor Aurangzeb marked the end of medieval India. It marked the beginning of modern India and the era of extensive European intervention in the subcontinent, coinciding with Maratha expansion. The victory of the British East India Company over the Nawab of Bengal and their French allies [8] in the Battle of Plassey caused the deindustrialization of Bengal. The British invasion expanded to cover much of South Asia. French emperor Napoleon Bonaparte formed one of the Franco-Indian alliances with the major power of the Kingdom of Mysore, [9] governed by Tipu Sultan and his father Hyder Ali. [10] [11]

For a chronological guide, see Timeline of the 18th century.

Tipu Sultan, also known as the Tiger of Mysore, was the ruler of the Kingdom of Mysore based in South India. He was a pioneer of rocket artillery. He introduced a number of administrative innovations during his rule, including a new coinage system and calendar, and a new land revenue system, which initiated the growth of the Mysore silk industry. He expanded the iron-cased Mysorean rockets and commissioned the military manual Fathul Mujahidin. He deployed the rockets against advances of British forces and their allies during the Anglo-Mysore Wars, including the Battle of Pollilur and Siege of Srirangapatna. 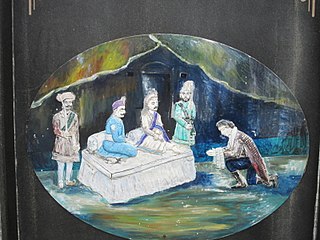 The First Anglo-Maratha War (1775–1782) was the first of three Anglo-Maratha Wars fought between the British East India Company and Maratha Empire in India. The war began with the Treaty of Surat and ended with the Treaty of Salbai. The war was fought in between Surat and Pune Kingdom saw British defeat and restoration of positions of both the parties before the war. Warren Hastings, the first President and Governor-General of East India Company's provinces in India decided not to attack Poona directly. 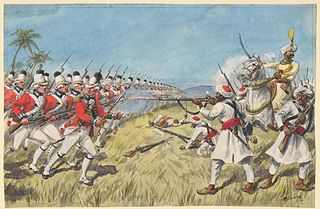 The Second Anglo-Mysore War was a conflict between the Kingdom of Mysore and the British East India Company from 1780 to 1784. At the time, Mysore was a key French ally in India, and the conflict between Britain against the French and Dutch in the American Revolutionary War sparked Anglo-Mysorean hostilities in India. The great majority of soldiers on the company side were raised, trained, paid and commanded by the company, not the British government. However, the company's operations were also bolstered by Crown troops sent from Britain, and by troops from Hanover, which was also ruled by Britain's King George III. 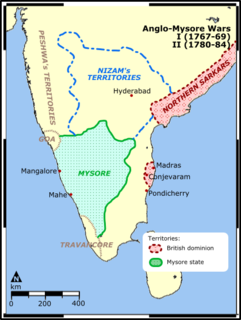 The First Anglo-Mysore War (1766–1769) was a conflict in India between the Sultanate of Mysore and the East India Company. The war was instigated in part by the machinations of Asaf Jah II, the Nizam of Hyderabad, who sought to divert the company's resources from attempts to gain control over the Northern Circars.

The Anglo-Mysore Wars were a series of wars fought during the last three decades of the 18th century between the Kingdom of Mysore on the one hand, and the British East India Company, Maratha Empire, Kingdom of Travancore and the Nizam of Hyderabad on the other. Hyder Ali and his successor Tipu Sultan fought a war on four fronts with the British attacking from the west, south and east, while the Nizam's forces attacked from the north. The fourth war resulted in the overthrow of the house of Hyder Ali and Tipu, and the dismantlement of Mysore to the benefit of the East India Company, which took control of much of the Indian subcontinent. 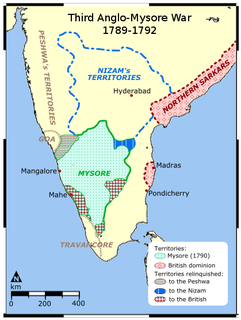 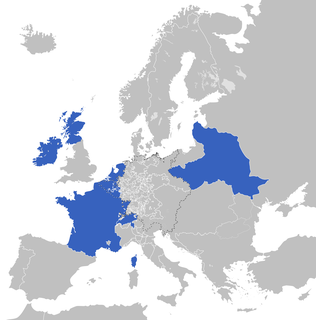 The Atlantic Revolutions were a revolutionary wave in the late eighteenth and early nineteenth centuries. It was associated with the Atlantic World during the era from the 1760s to the 1830s. 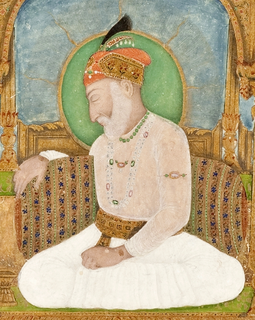 Shah Alam II, also known by his birth name Ali Gohar, was the seventeenth Mughal Emperor and the son of Alamgir II. Shah Alam II became the emperor of a crumbling Mughal empire. His power was so depleted during his reign that it led to a saying in the Persian language, Sultanat-e-Shah Alam, Az Dilli ta Palam, meaning, 'The empire of Shah Alam is from Delhi to Palam', Palam being a suburb of Delhi.

The provinces of India, earlier presidencies of British India and still earlier, presidency towns, were the administrative divisions of British governance on the Indian subcontinent. Collectively, they have been called British India. In one form or another, they existed between 1612 and 1947, conventionally divided into three historical periods: 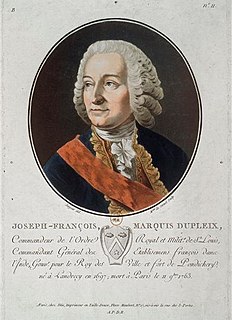 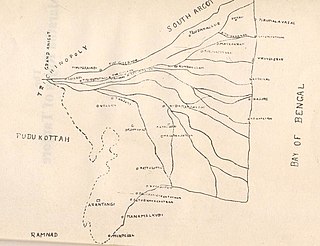 The Thanjavur Maratha kingdom ruled by the Bhonsle dynasty was a principality of Tamil Nadu between the 17th and 19th centuries. Their native language was Marathi. Venkoji was the founder of the dynasty. 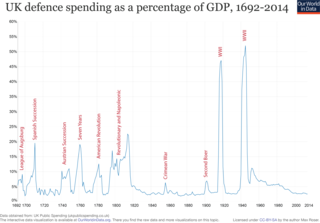 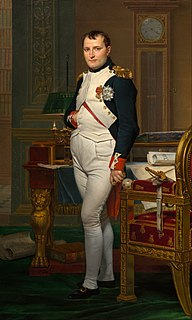 The military career of Napoleon Bonaparte spanned over 20 years. As military leader, he led the French armies to defeat in the Napoleonic Wars. Despite his losing war record and ending in defeat, Napoleon is regarded in Europe as a military genius and one of the finest commanders, his wars and campaigns have been studied at military schools worldwide. He fought more than 70 battles, losing only nine, mostly at the end when the French army was not as dominant. The French dominion collapsed rapidly after the disastrous invasion of Russia in 1812. Napoleon was defeated in 1814 and exiled to the island of Elba, before returning and was finally defeated in 1815 at Waterloo. He spent his remaining days in British custody on the remote island of St. Helena.

Various Franco-Indian Alliances were formed between France and various Indian kingdoms from the 18th century to the ascent of Napoleon. Following the alliances of Dupleix, a formal alliance was formed between by King Louis XVI during the American Revolutionary War in an attempt to oust the British East India Company from the Indian subcontinent. Later, numerous proposals of alliance were made by Tipu Sultan, leading to the dispatch of a French fleet of volunteers to help him, and even motivating an effort by Napoleon to make a junction with the Kingdom of Mysore through his 1798 campaign in Egypt.

British General Charles Cornwallis, the Earl Cornwallis, was appointed in February 1786 to serve as both Commander-in-Chief of British India and Governor of the Presidency of Fort William, also known as the Bengal Presidency. He oversaw the consolidation of British control over much of peninsular India, setting the stage for the British Raj. He was also instrumental in enacting administrative and legal reforms that fundamentally altered civil administration and land management practices there. According to historian Jerry Dupont, Cornwallis was responsible for "laying the foundation for British rule throughout India and setting standards for the services, courts, and revenue collection that remained remarkably unaltered almost to the end of the British era."