Chishti Sharif District is the most easterly district in Herat Province, Afghanistan, situated along the Hari River and one of its northern tributaries. It borders with Obe District to the west, Badghis Province to the north and Ghor Province to the east and south. The population was estimated at 23,100 in 2012. [1] The district administrative center is the village of Chishti Sharif.

Shaal Pir Baba was a Sufi saint who was also a leader of the Moudodi Syed's in Balochistan and Sindh, today's Pakistan.

Afghan-India Friendship Dam (AIFD), formerly Salma Dam, is a hydroelectric and irrigation dam project located on the Hari River in Chishti Sharif District of Herat Province in western Afghanistan. Since this project is funded and constructed by the Government of India as a part of the Indian aid project, the Afghan cabinet renamed the Salma Dam to the Afghan-India Friendship Dam in a gesture of gratitude to strengthen relations between the two countries. 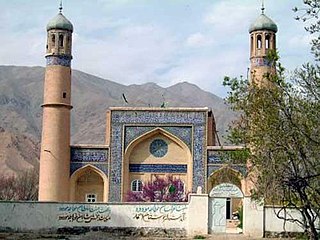 Chishti Sharif is a town situated on the northern bank of the Hari River in Herat Province, Afghanistan. It is the administrative center of Chishti Sharif District.