Sector is a name for a country subdivision.

It is used for:

A floppy disk, also known as a floppy, diskette, or simply disk, is a type of disk storage composed of a disk of thin and flexible magnetic storage medium, sealed in a rectangular plastic enclosure lined with fabric that removes dust particles. Floppy disks are read and written by a floppy disk drive (FDD).

The Primary sector of the economy includes any industry involved in the extraction and production of raw materials, such as farming, forestry, fishing and mining.

The secondary sector of the economy including industries that produce a finished, usable product or are involved in construction. 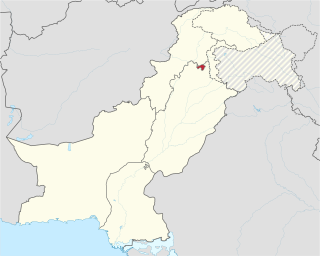 Islamabad Capital Territory is the only federal territory of Pakistan. Located in north-central Pakistan between the provinces of Punjab and Khyber Pakhtunkhwa, it includes the country's federal capital Islamabad. The territory is represented in the National Assembly constituencies NA-52, NA-53 and NA-54. 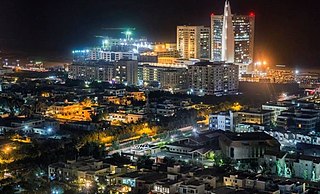 The economy of Pakistan is the 23rd largest in the world in terms of purchasing power parity (PPP), and 42nd largest in terms of nominal gross domestic product. Pakistan has a population of over 220 million, giving it a nominal GDP per capita of $1,357 in 2019, which ranks 154th in the world and giving it a PPP GDP per capita of 5,839 in 2019, which ranks 132nd in the world for 2019. However, Pakistan's undocumented economy is estimated to be 36% of its overall economy, which is not taken into consideration when calculating per capita income. Pakistan is a developing country and is one of the Next Eleven countries identified by Jim O'Neill in a research paper as having a high potential of becoming, along with the BRICS countries, among the world's largest economies in the 21st century. The economy is semi-industrialized, with centres of growth along the Indus River. Primary export commodities include textiles, leather goods, sports goods, chemicals and carpets/rugs.

Manufacturing is the production of products for use or sale using labor and machines, tools, chemical or biological processing or formulation, and is the essence of secondary industry. The term may refer to a range of human activity from handicraft to high tech but is most commonly applied to industrial design, in which raw materials from primary industry are transformed into finished goods on a large scale. Such finished goods may be sold to other manufacturers for the production of other more complex products, or distributed via the tertiary industry to end users and consumers. 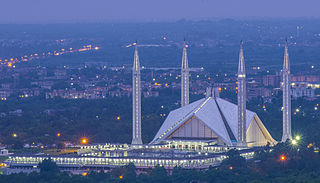 Islamabad is the capital city of Pakistan, and is federally administered as part of the Islamabad Capital Territory. Islamabad is the ninth largest city in Pakistan, while the larger Islamabad-Rawalpindi metropolitan area is the country's fourth largest with a population of about 7.4 million.

File Allocation Table (FAT) is a computer file system architecture. Originally developed in 1977 for use on floppy disks, it was adapted for use on hard disks and other devices. It is often supported for compatibility reasons by current operating systems for personal computers and many mobile devices and embedded systems, allowing interchange of data between disparate systems. The increase in disk drives capacity required three major variants: FAT12, FAT16 and FAT32. The FAT standard has also been expanded in other ways while generally preserving backward compatibility with existing software.

An informal economy is the part of any economy that is neither taxed nor monitored by any form of government.

A nonprofit organization (NPO), also known as a non-business entity, not-for-profit organization, or nonprofit institution, is an organization traditionally dedicated to furthering a particular social cause or advocating for a shared point of view. In economic terms, it is an organization using its surplus of the revenues to further achieve its ultimate objective, rather than distributing its income to the organization's shareholders, leaders, or members. Being public extensions of a nation's revenue department, nonprofits are tax-exempt or charitable, meaning they do not pay income tax on the money that they receive for their organization. They can operate in religious, scientific, research, or educational settings.

The Chinese People's Political Consultative Conference, also known as the People's PCC or simply the PCC (政协), is a political advisory body in the People's Republic of China. The organisation consists of delegates from eight legally-permitted political parties and other organisations, as well as independent members. The proportion of representation of the various parties is determined by established convention, negotiated between the parties. The CPPCC is indirectly controlled by the United Front Work Department.

The private sector is the part of the economy, sometimes referred to as the citizen sector, which is owned by private individuals or groups, usually as a means of enterprise for profit, rather than being owned by the state.

The public sector is the part of the economy composed of both public services and public enterprises.

A public–private partnership is a cooperative arrangement between two or more public and private sectors, typically of a long-term nature. In other words, it involves government(s) and business(es) that work together to complete a project and/or to provide services to the population. Because PPPs are a cooperative between government and the private sector, they are an example of multistakeholder governance. Public–private partnerships have been implemented in multiple countries, are primarily used for infrastructure projects, such as the building and equipping of schools, hospitals, transport systems, and water and sewerage systems.

The economy of India is characterised as a developing market economy. It is the world's fifth-largest economy by nominal GDP and the third-largest by purchasing power parity (PPP). According to the IMF, on a per capita income basis, India ranked 139th by GDP (nominal) and 118th by GDP (PPP) in 2018. From independence in 1947 until 1991, successive governments promoted protectionist economic policies with extensive state intervention and regulation; the end of the Cold War and an acute balance of payments crisis in 1991 led to the adoption of a broad program of economic liberalisation. Since the start of the 21st century, annual average GDP growth has been 6% to 7%, and from 2014 to 2018, India was the world's fastest growing major economy, surpassing China. Historically, India was the largest economy in the world for most of the two millennia from the 1st until 19th century.

An economy is an area of the production, distribution and trade, as well as consumption of goods and services by different agents. Understood in its broadest sense, 'The economy is defined as a social domain that emphasize the practices, discourses, and material expressions associated with the production, use, and management of resources'. A given economy is the result of a set of processes that involves its culture, values, education, technological evolution, history, social organization, political structure and legal systems, as well as its geography, natural resource endowment, and ecology, as main factors. These factors give context, content, and set the conditions and parameters in which an economy functions. In other words, the economic domain is a social domain of human practices and transactions. It does not stand alone. 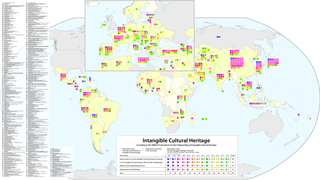 UNESCO established its Lists of Intangible Cultural Heritage with the aim of ensuring better protection of important intangible cultural heritages worldwide and the awareness of their significance. This list is published by the Intergovernmental Committee for the Safeguarding of Intangible Cultural Heritage, the members of which are elected by State Parties meeting in a General Assembly. Through a compendium of the different oral and intangible treasures of humankind worldwide, the programme aims to draw attention to the importance of safeguarding intangible heritage, which UNESCO has identified as an essential component and as a repository of cultural diversity and of creative expression.