Surat Buhid is an Abugida used to write the Buhid language. As a Brahmic script indigenous to the Philippines, it closely related to Baybayin and Hanunó'o. It is still used today by the Mangyans, found mainly on island of Mindoro, to write their language, Buhid, together with the Filipino latin script.

The Buhid script has 18 independent characters, 15 are consonants and 3 vowels. As an Abugida, there is an additional diacritic vowels. Consonants have an inherent /a/ vowel. The other two vowels are indicated by a diacritic above (for /i/) or below (for /u/) the consonant. Depending on the consonant, ligatures are formed, changing the shape of the consonant-vowel combination. [4] Vowels at the beginning of syllables are represented by their own, independent characters. Syllables ending in a consonant are written without the final consonant. [5]

The letter order of Buhid, recorded in Unicode, is based on phonetic principles that consider both the manner and place of articulation of the consonants and vowels they represent.

Note: With the proper rendering support, the Buhid syllable ki above (ᝃᝒ) should resemble a plus sign (+).

Buhid script was added to the Unicode Standard in March, 2002 with the release of version 3.2. 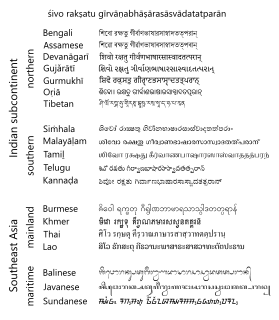 An abugida, sometimes known as alphasyllabary, neosyllabary or pseudo-alphabet, is a segmental writing system in which consonant-vowel sequences are written as units; each unit is based on a consonant letter, and vowel notation is secondary. This contrasts with a full alphabet, in which vowels have status equal to consonants, and with an abjad, in which vowel marking is absent, partial, or optional. The terms also contrast them with a syllabary, in which the symbols cannot be split into separate consonants and vowels.

Sinhala script, also known as Sinhalese script, is a writing system used by the Sinhalese people and most Sri Lankans in Sri Lanka and elsewhere to write the Sinhala language, as well as the liturgical languages, Pali and Sanskrit. The Sinhalese Akṣara Mālāva, one of the Brahmic scripts, is a descendant of the Ancient Indian Brahmi script. It is also related to ancient Kannada script.

The Kannada script is an abugida of the Brahmic family, used to write Kannada, one of the Dravidian languages of South India especially in the state of Karnataka. Kannada script is also widely used for writing Sanskrit texts in Karnataka. Several minor languages, such as Tulu, Konkani, Kodava, Sanketi and Beary, also use alphabets based on the Kannada script. The Kannada and Telugu scripts share very high mutual intellegibility with each other, and are often considered to be regional variants of single script. Other scripts similar to Kannada script are Sinhala script, and Old Peguan script (used in Burma). 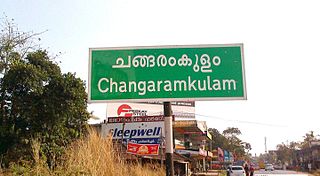 Malayalam script is a Brahmic script used commonly to write Malayalam, which is the principal language of Kerala, India, spoken by 45 million people in the world. It is a Dravidian language spoken in the Indian state of Kerala and the union territories of Lakshadweep and Puducherry by the Malayali people. It is one of 22 scheduled languages of India Malayalam script is also widely used for writing Sanskrit texts in Kerala. 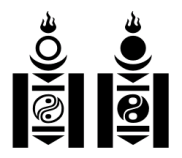 The Soyombo script is an abugida developed by the monk and scholar Zanabazar in 1686 to write Mongolian. It can also be used to write Tibetan and Sanskrit.

Baybayin is a Philippine script. The script is an alphasyllabary belonging to the family of the Brahmic scripts. It was widely used in Luzon and other parts of the Philippines prior to and during the 16th and 17th centuries before being replaced by the Latin alphabet during the period of Spanish colonization. It was used in Tagalog and to a lesser extent Kapampangan speaking areas; its use spread to Ilokanos in the early 17th century. In the 19th and 20th centuries, baybayin survived and evolved into multiple forms—the Tagbanwa script of Palawan, and the Hanuno'o and Buhid scripts of Mindoro—and was used to create the constructed modern Kulitan script of the Kapampangan and the Ibalnan script of the Palawan tribe. Under the Unicode Standard and ISO 15924, the script is known as Tagalog.

The Batak script is a writing system used to write the Austronesian Batak languages spoken by several million people on the Indonesian island of Sumatra. The script may be derived from the Kawi and Pallava script, ultimately derived from the Brahmi script of India, or from the hypothetical Proto-Sumatran script influenced by Pallava.

The Tamil script is an abugida script that is used by Tamils and Tamil speakers in India, Sri Lanka, Malaysia, Singapore, Indonesia and elsewhere to write the Tamil language. Certain minority languages such as Saurashtra, Badaga, Irula and Paniya are also written in the Tamil script.

Telugu script, an abugida from the Brahmic family of scripts, is used to write the Telugu language, a Dravidian language spoken in the Indian states of Andhra Pradesh and Telangana as well as several other neighbouring states. The Telugu script is also widely used for writing Sanskrit texts and to some extent the Gondi language. It gained prominence during the Eastern Chalukyas also known as Vengi Chalukya era. It shares extensive similarities with the Kannada script, as they both evolved from the Kadamba and Bhattiprolu scripts of the Brahmi family. In 2008, the Telugu language was given the status of a Classical Language of India, in recognition of its rich history and heritage.

Tagbanwa, is one of the scripts indigenous to the Philippines, used by the Tagbanwa people and the Palawan people as their ethnic writing system and script.

The Kawi or Old Javanese script is a Brahmic script found primarily in Java and used across much of Maritime Southeast Asia between the 8th century and the 16th century. The script is an abugida meaning that characters are read with an inherent vowel. Diacritics are used, either to suppress the vowel and represent a pure consonant, or to represent other vowels.

The Cham script is a Brahmic abugida used to write Cham, an Austronesian language spoken by some 245,000 Chams in Vietnam and Cambodia. It is written horizontally left to right, just like other Brahmic abugidas.

New Tai Lue script, also known as Xishuangbanna Dai and Simplified Tai Lue, is an abugida used to write the Tai Lü language. Developed in China in the 1950s, New Tai Lue is based on the traditional Tai Tham alphabet developed c. 1200. The government of China promoted the alphabet for use as a replacement for the older script; teaching the script was not mandatory, however, and as a result many are illiterate in New Tai Lue. In addition, communities in Burma, Laos, Thailand and Vietnam still use the Tai Tham alphabet.

Hanunoo, also rendered Hanunó'o, is one of the scripts indigenous to the Philippines and is used by the Mangyan peoples of southern Mindoro to write the Hanunó'o language.

Kulitan, also known as súlat Kapampángan and pamagkulit, is one of the various indigenous suyat writing systems in the Philippines. It was used for writing Kapampangan, a language mainly spoken in Central Luzon, until it was gradually replaced by the Latin alphabet.

The Shan script is a Brahmic abugida used for writing Shan language which was derived from the Burmese script.