L'Osservatore Romano (Italian:  [losservaˈtoːre roˈmaːno] , 'The Roman Observer') is the daily newspaper of Vatican City State which reports on the activities of the Holy See and events taking place in the Church and the world. [1] [2] It is owned by the Holy See but is not an official publication, a role reserved for the Acta Apostolicae Sedis , which acts as a government gazette. [3] [4] [2] The views expressed in the Osservatore are those of individual authors unless they appear under the specific titles "Nostre Informazioni" or "Santa Sede". [5] [6]

Available in nine languages, the paper prints two Latin mottos under the masthead of each edition: Unicuique suum ("To each his own") and Non praevalebunt ("[The gates of Hell] shall not prevail"). [7] The current editor-in-chief is Andrea Monda.

On 27 June 2015, Pope Francis, in an apostolic letter, established the Secretariat for Communications, a new part of the Roman Curia, and included L'Osservatore Romano under its management. [8] [9]

The daily Italian edition of L'Osservatore Romano is published in the afternoon, but with a cover date of the following day, a convention that sometimes results in confusion. [3] The weekly English edition is distributed in more than 129 countries, including both English-speaking countries and locales where English is used as the general means of communication. [10]

Giornale di Roma was the newspaper of the Papal States, with first issue published in Rome on 6 July 1849. It continued until 19 September 1870 and is considered the predecessor of L'Osservatore Romano.

The first issue of L'Osservatore Romano was published in Rome on 1 July 1861, a few months after the Kingdom of Italy was proclaimed on 17 March 1861. [10] The original intent of the newspaper was unabashedly polemical and propagandistic in defence of the Papal States, adopting the name of a private pamphlet financed by a French Catholic legitimist group. [10] 18 September 1860 defeat of papal troops at Castelfidardo substantially reduced the temporal power of the Pope, prompting Catholic intellectuals to present themselves in Rome for the service of Pope Pius IX. [10] This agenda supported the notion of a daily publication to champion the opinions of the Holy See. [10]

By July 1860, the deputy Minister of the Interior, Marcantonio Pacelli (grandfather of the future Pope Pius XII), had plans to supplement the official bulletin of the Catholic Church Giornale di Roma with a semi-official "rhetorical" publication. In early 1861, controversialist Nicola Zanchini and journalist Giuseppe Bastia were granted editorial direction of Pacelli's newspaper. Official permission to publish was sought on 22 June 1861, and four days later, on 26 June, Pius IX gave his approval for the regulation of L'Osservatore. [10]

The first edition was entitled "L'Osservatore Romano – a political and moral paper" and cost five baiocchi. The "political and moral paper" epithet was dropped before 1862, adding instead the two Latin mottoes that still appear under the masthead today. [10] The editors of the paper initially met in the Salviucci Press on the Piazza de' Santi Apostoli, where the paper was printed. Only when the editorial staff was established on the Palazzo Petri in Piazza dei Crociferi and the first issue printed there on 31 March, was the wording "daily newspaper" added to the masthead.

After the breach of Porta Pia by Italian troops in September 1870, L'Osservatore Romano solidified its opposition to the Kingdom of Italy, affirming obedience to the Pope and adherence to his directives, stating it would remain faithful "to that unchangeable principle of religion and morals which recognises as its sole depository and claimant the Vicar of Jesus Christ on earth". [10] Soon after, L'Osservatore began to replace the Giornale di Roma as the news organ of the Pontifical State. Giornale di Roma stopped publication on 19 September 1870 almost a decade after launch of L'Osservatore Romano. During the pontificate of Pope Leo XIII, The Vatican acquired the paper's ownership in 1885.

The Osservatore continued to be published as a newspaper in Vatican City, but in 1904 Acta Sanctae Sedis which had existed since 1865, was declared the formal organ of the Holy See in that all documents printed in it were considered "authentic and official". [12] Acta Sanctae Sedis ceased publication four years later and on 29 September 1908 Acta Apostolicae Sedis became the official publication of the Holy See. [13]

The English weekly edition was first published on 4 April 1968. [10] On 7 January 1998, that edition became the first to be printed outside of Rome, when for North American subscribers, it began to be printed in Baltimore. [14] The edition was printed by the Cathedral Foundation, publishers of The Catholic Review . [14]

As of 1 July 2011, the English language edition of the L'Osservatore Romano for North American subscribers is once again published in Rome; [15] it had been published by the Cathedral Foundation of Baltimore since 1998. [14]

In the 21st century, the paper has taken a more objective and subdued stance than at the time of its foundation, priding itself in "presenting the genuine face of the church and the ideals of freedom", following the statement by Cardinal Tarcisio Bertone in an October 2006 speech inaugurating a new exhibit dedicated to the founding and history of the newspaper. [16] He further described the publication as "an instrument for spreading the teachings of the successor of Peter and for information about church events". [16]

Official views of the Magisterium

It is a common error to assume that the contents of the L'Osservatore Romano represent the views of the Magisterium, or the official position of the Holy See. In general, this is not the case, and the only parts of the Osservatore which represent the views of the Holy See are those that appear under the titles "Nostre Informazioni" or "Santa Sede". [5] [6] At times the Magisterium disputes the contents of the Osservatore, e.g. a 2008 article expressed the desire that the debate on brain death be re‑opened because of new developments in the medical world. An official spokesman said that the article presented a personal opinion of the author and "did not reflect a change in the Catholic Church's position". [17]

Catholic-Hierarchy.org is an online database of bishops and dioceses of the Roman Catholic Church and Eastern Catholic Churches. The website is not officially sanctioned by the Church. It is run as a private project by David M. Cheney in Kansas City.

Vatican City uses Italian in its official documents and as its main working language. However, many other languages are also used by institutions situated within the state, such as the Holy See and the Swiss Guard, as well as personally by its diverse population.

The Magisterium of Pope Pius XII consists of some 1,600 mostly non-political speeches, messages, radio and television speeches, homilies, apostolic letters, and encyclicals of Pope Pius XII. His magisterium has been largely neglected or even overlooked by his biographers, who center on the policies of his pontificate.

The Raccolta, is a book, published in many editions from 1807 to 1952, that collected the texts of Roman Catholic prayers and briefly described other acts of piety, such as visiting and praying in particular churches, for which specific indulgences were granted by popes. In 1968, it was replaced by a considerably altered edition, the Enchiridion Indulgentiarum, listing fewer specific prayers but including new general grants that apply to a wide range of prayerful actions. The earliest editions were published in Italian, with the prayers themselves given in Latin, Italian, or both languages. Beginning with the 1929 edition, the Raccolta was published in Latin, with the prayers themselves given in Latin, Italian, or to a lesser degree, French, Spanish, English, and German.

Pope Pius XII and Poland includes Church relations from 1939 to 1958. Pius XII became Pope on the eve of the Second World War. The invasion of predominantly Catholic Poland by Nazi Germany in 1939 ignited the conflict and was followed soon after by a Soviet invasion of the Eastern half of Poland, in accordance with an agreement reached between the dictators Joseph Stalin and Adolf Hitler. The Catholic Church in Poland was about to face decades of repression, both at Nazi and Communist hands. The Nazi persecution of the Catholic Church in Poland was followed by a Stalinist repression which was particularly intense through the years 1946–1956. Pope Pius XII's policies consisted in attempts to avoid World War II, extensive diplomatic activity on behalf of Poland and encouragement to the persecuted clergy and faithful.

The Decree Against Communism was a 1949 Catholic Church document issued by the Supreme Sacred Congregation of the Holy Office, and approved by Pope Pius XII, which declared Catholics who professed Communist doctrine to be excommunicated as apostates from the Christian faith.

Achille Marie Joseph Glorieux was a French prelate who held diplomatic posts of the Catholic Church. 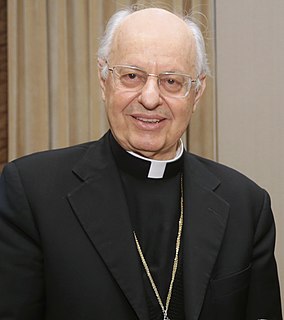 Yoannis Lahzi Gaid is a Coptic Catholic priest who has served since April 2014 as second personal secretary to Pope Francis. He is the first Eastern Catholic to hold the position.

Giovanni Ceirano was an Italian prelate of the Catholic Church who worked in the diplomatic service of the Holy See. He became an archbishop in 1990 and served as Apostolic Nuncio from 1990 to 1999.

Francesco Lardone was an Italian-born prelate of the Catholic Church who became a U.S. citizen in 1937. He taught for 25 years at Catholic University in Washington, D.C., and then served in the diplomatic service of the Holy See as an Apostolic Nuncio and archbishop. He played a key role in arranging for bishops from the Communist-led countries of Eastern Europe to attend the Second Vatican Council.

Agostino Marchetto is an Italian prelate of the Catholic Church who worked in the diplomatic service of the Holy See from 1968 to 1999 and then in the Roman Curia until his retirement in 2010. He is regarded as one of the principal historians of the Second Vatican Council.

Luigi Galimberti was an Italian prelate of the Catholic Church who had a varied career as an academic and theologian, journalist, diplomat, and Vatican official. He became an archbishop in 1887 and a cardinal in 1893. He was considered a candidate for the papacy when he died at the age of 60.