Troponin C is a protein which is part of the troponin complex. It contains four calcium-binding EF hands, although different isoforms may have fewer than four functional calcium-binding subdomains. It is a component of thin filaments, along with actin and tropomyosin. It contains an N lobe and a C lobe. The C lobe serves a structural purpose and binds to the N domain of troponin I (TnI). The C lobe can bind either Ca2+ or Mg2+. The N lobe, which binds only Ca2+, is the regulatory lobe and binds to the C domain of troponin I after calcium binding.

The tissue specific subtypes are:

Point mutations can occur in troponin C inducing alterations to Ca2+ and Mg2+ binding and protein structure, [1] leading to abnormalities in muscle contraction. [2] [3] In cardiac muscle, they are related to dilated cardiomyopathy (DCM) and hypertrophic cardiomyopathy (HCM).

These known point mutations are:

Troponin, or the troponin complex, is a complex of three regulatory proteins that are integral to muscle contraction in skeletal muscle and cardiac muscle, but not smooth muscle. Measurements of cardiac-specific troponins I and T are extensively used as diagnostic and prognostic indicators in the management of myocardial infarction and acute coronary syndrome. Blood troponin levels may be used as a diagnostic marker for stroke or other myocardial injury that is ongoing, although the sensitivity of this measurement is low. 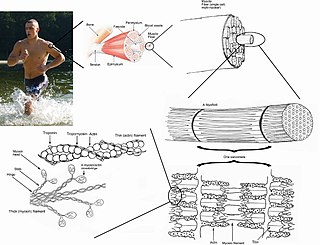 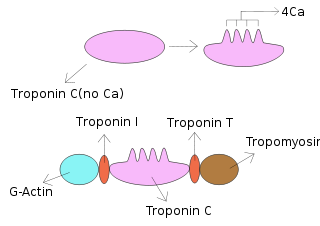 Troponin I is a cardiac and skeletal muscle protein family. It is a part of the troponin protein complex, where it binds to actin in thin myofilaments to hold the actin-tropomyosin complex in place. Troponin I prevents myosin from binding to actin in relaxed muscle. When calcium binds to the troponin C, it causes conformational changes which lead to dislocation of troponin I. Afterwards, tropomyosin leaves the binding site for myosin on actin leading to contraction of muscle. The letter I is given due to its inhibitory character. It is a useful marker in the laboratory diagnosis of heart attack. It occurs in different plasma concentration but the same circumstances as troponin T - either test can be performed for confirmation of cardiac muscle damage and laboratories usually offer one test or the other.

Troponin I, cardiac muscle is a protein that in humans is encoded by the TNNI3 gene. It is a tissue-specific subtype of troponin I, which in turn is a part of the troponin complex.

Cardiac muscle troponin T (cTnT) is a protein that in humans is encoded by the TNNT2 gene. Cardiac TnT is the tropomyosin-binding subunit of the troponin complex, which is located on the thin filament of striated muscles and regulates muscle contraction in response to alterations in intracellular calcium ion concentration.

Ryanodine receptor 2 (RYR2) is one of a class of ryanodine receptors and a protein found primarily in cardiac muscle. In humans, it is encoded by the RYR2 gene. In the process of cardiac calcium-induced calcium release, RYR2 is the major mediator for sarcoplasmic release of stored calcium ions.

Tropomyosin alpha-1 chain is a protein that in humans is encoded by the TPM1 gene. This gene is a member of the tropomyosin (Tm) family of highly conserved, widely distributed actin-binding proteins involved in the contractile system of striated and smooth muscles and the cytoskeleton of non-muscle cells.

ACTC1 encodes cardiac muscle alpha actin. This isoform differs from the alpha actin that is expressed in skeletal muscle, ACTA1. Alpha cardiac actin is the major protein of the thin filament in cardiac sarcomeres, which are responsible for muscle contraction and generation of force to support the pump function of the heart.

Troponin C, also known as TN-C or TnC, is a protein that resides in the troponin complex on actin thin filaments of striated muscle and is responsible for binding calcium to activate muscle contraction. Troponin C is encoded by the TNNC1 gene in humans for both cardiac and slow skeletal muscle.

Telethonin, also known as Tcap, is a protein that in humans is encoded by the TCAP gene. Telethonin is expressed in cardiac and skeletal muscle at Z-discs and functions to regulate sarcomere assembly, T-tubule function and apoptosis. Telethonin has been implicated in several diseases, including limb-girdle muscular dystrophy, hypertrophic cardiomyopathy, dilated cardiomyopathy and idiopathic cardiomyopathy.

Slow skeletal muscle troponin T (sTnT) is a protein that in humans is encoded by the TNNT1 gene.

Myosin heavy chain, α isoform (MHC-α) is a protein that in humans is encoded by the MYH6 gene. This isoform is distinct from the ventricular/slow myosin heavy chain isoform, MYH7, referred to as MHC-β. MHC-α isoform is expressed predominantly in human cardiac atria, exhibiting only minor expression in human cardiac ventricles. It is the major protein comprising the cardiac muscle thick filament, and functions in cardiac muscle contraction. Mutations in MYH6 have been associated with late-onset hypertrophic cardiomyopathy, atrial septal defects and sick sinus syndrome.

Myosin essential light chain (ELC), ventricular/cardiac isoform is a protein that in humans is encoded by the MYL3 gene. This cardiac ventricular/slow skeletal ELC isoform is distinct from that expressed in fast skeletal muscle (MYL1) and cardiac atrial muscle (MYL4). Ventricular ELC is part of the myosin molecule and is important in modulating cardiac muscle contraction.

Cysteine and glycine-rich protein 3 also known as cardiac LIM protein (CLP) or muscle LIM protein (MLP) is a protein that in humans is encoded by the CSRP3 gene.

Troponin C, skeletal muscle is a protein that in humans is encoded by the TNNC2 gene.

Calcium buffering describes the processes which help stabilise the concentration of free calcium ions within cells, in a similar manner to how pH buffers maintain a stable concentration of hydrogen ions. The majority of calcium ions within the cell are bound to intracellular proteins, leaving a minority freely dissociated. When calcium is added to or removed from the cytoplasm by transport across the cell membrane or sarcoplasmic reticulum, calcium buffers minimise the effect on changes in cytoplasmic free calcium concentration by binding calcium to or releasing calcium from intracellular proteins. As a result, 99% of the calcium added to the cytosol of a cardiomyocyte during each cardiac cycle becomes bound to calcium buffers, creating a relatively small change in free calcium.

A8V is point mutation on Troponin C (cTNC) that leads to a hypertrophic cardiomyopathy. The coordinated cardiac muscle contraction is regulated by the troponin complex on thin filament (troponin C which is calcium binding, troponin T that plays the role with tropomyosin, and troponin I which has an inhibitory action annulating the S1 ATPase activity in the presence of tropomyosin and troponin and absence of Ca2+). This mutation is determined by the change of Alanine to Valine at nucleotide 23 from C to T. Patients with this type of mutation shows thickness on the left ventricle wall of around 18 mm, compared to the normal this thickness would be 12 mm. Also, A8V affects the Ca2+ binding affinity compared to normal genotype and increased sensitivity on force development.

D145E is a point mutation on troponin C that leads to hypertrophic cardiomyopathy disease. This mutation is caused by the change of nucleotide C to A at nucleotide 435, switching the amino acid aspartic acid to glutamic acid, which is located at the C-terminal tail. Patients with this mutation have different structure on the thin filament and alter the binding of Ca2+ at the troponin C site IV. Further, D145E causes increase in development of force and activation of ATPase in the presence of Ca2+.