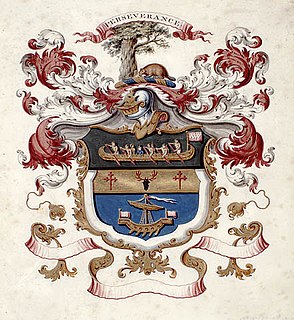 The North West Company was a fur trading business headquartered in Montreal from 1779 to 1821. It competed with increasing success against the Hudson's Bay Company in what is present-day Western Canada. With great wealth at stake, tensions between the companies increased to the point where several minor armed skirmishes broke out, and the two companies were forced by the British government to merge. 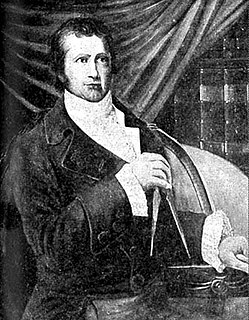 David Thompson was a British-Canadian fur trader, surveyor, and map-maker, known to some native peoples as Koo-Koo-Sint or "the Stargazer." Over Thompson's career, he travelled some 90,000 kilometres (56,000 mi) across North America, mapping 4.9 million square kilometres of North America along the way. For this historic feat, Thompson has been described as the "greatest land geographer who ever lived."

The site was designated a National Historic Site of Canada in 1934. [3]

In July 2005, Parks Canada, in cooperation with several members of the Ktunaxa Nation conducted archaeological investigations at the site of Thompson's Kootanae House, near Invermere BC. Kootanae House was David Thompson's first post constructed in the Columbia Basin and his "jumping off point" for further explorations throughout the region. [4] The Archaeology confirms that this site is the location of a North West Company trading posts and lays to rest some inconsistencies between the site and Thompson's description of the trading post.

Parks Canada, officially called the Parks Canada Agency, is an agency of the Government of Canada run by a chief executive who answers to the Minister of the Environment and Climate Change. Parks Canada is mandated to "protect and present nationally significant examples of Canada's natural and cultural heritage, and foster public understanding, appreciation, and enjoyment in ways that ensure their ecological and commemorative integrity for present and future generations". Parks Canada manages 38 National Parks, three National Marine Conservation Areas, 171 National Historic Sites, one National Urban Park, and one National Landmark. The agency also administers lands and waters set aside as potential national parklands, including eight National Park Reserves and one National Marine Conservation Area Reserve. More than 450,000 km2 (170,000 sq mi) of lands and waters in national parks and national marine conservation areas has been set aside for such purposes. The Canadian Register of Historic Places is supported and managed by Parks Canada, in collaboration with provincial and territorial governments and other federal bodies. The agency is also the working arm of the national Historic Sites and Monuments Board, which recommends National Historic Sites, Events, and Persons.

Kullyspell House was a fur trading post established in 1809 on Lake Pend Oreille in what is now North Idaho. It was built by Finan McDonald under the direction of David Thompson of the North West Company. 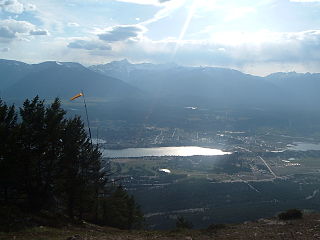 Invermere is a community in eastern British Columbia, Canada, near the border of Alberta. It is the hub of the Columbia Valley between Golden to the north and Cranbrook to the south. Invermere sits on the northwest shore of Windermere Lake and is a popular summer destination for visitors and second home owners from Calgary.

The Kootenay is a major river in southeastern British Columbia, Canada, and northern Montana and Idaho in the United States. It is one of the uppermost major tributaries of the Columbia River, the largest North American river that empties into the Pacific Ocean. The Kootenay River runs 781 kilometres (485 mi) from its headwaters in the Kootenay Ranges of the Canadian Rockies, flowing from British Columbia's East Kootenay region into northwestern Montana, then west into the northernmost Idaho Panhandle and returning to British Columbia in the West Kootenay region, where it joins the Columbia at Castlegar.

Kootenay, Kootenai, and Kutenai may refer to:

The Regional District of East Kootenay (RDEK) is a regional district in the Canadian province of British Columbia, Canada. At the 2016 census, the population was 60,439. Its area is 27,542.69 square kilometres. The regional district offices are in Cranbrook, the largest community in the region. Other important population centres include the cities of Kimberley and Fernie, and the district municipality of Invermere and Sparwood. Despite its name, the regional district does not include all of the region known as the East Kootenay, which includes the Creston Valley and the east shore of Kootenay Lake.

Spokane House was a fur-trading post founded in 1810 by the British-Canadian North West Company, located on a peninsula where the Spokane River and Little Spokane River meet. When established, it was the North West Company's farthest outpost in the Columbia River region. An American rival of the NWC, the Pacific Fur Company opened a station adjacent to Spokane House, called Fort Spokane. The War of 1812 and ongoing supply issues caused the collapse of the PFC, with its posts now under the control of the NWC. The original Spokane House was abandoned in favor of Fort Spokane, though the latter location was still called Spokane House. The second Spokane House saw use as a major post in the interior Oregon Country until the NWC was absorbed by the Hudson's Bay Company in 1821. During a general tour of the Pacific Northwest, Spokane House was abandoned by George Simpson in 1825, in favor of a new post that became Fort Colvile. The site of Spokane House is in Spokane County in the U.S. state of Washington, just northwest of the city of Spokane.

Wilmer is a small settlement near Invermere, British Columbia. The settlement was originally known as Peterborough and was founded in 1886. The explorer David Thompson founded a Northwest trading company post near the present-day site of Wilmer after crossing the Rockies via Howse Pass in 1807. Thompson spent a winter there while mapping the region. The site of the fort is now the National Historic Site Kootenae House.

Canal Flats Provincial Park was a provincial park in British Columbia, Canada, located at Canal Flats at the divide between Columbia Lake and the Kootenay River in the province's East Kootenay region. The park had been established in 1981 at approximately 6 hectares in size. In 2004, the park was converted from Order In Canada to Statute Designation and the size remained at approximately 6 hectares. The park status was cancelled in 2010 and the property is currently pending transfer to local government jurisdiction.

Columbia Lake Provincial Park is a provincial park in British Columbia, Canada, located on the northeast shore of Columbia Lake south of the town of Invermere. The park was established in 1988, comprising approximately 260 hectares. Its boundary was expanded in 2004, the total now comprising approximately 290 hectares, 275 hectares of which is upland, 15 hectares of which is foreshore.

Height of the Rockies Provincial Park is a provincial park in the Canadian Rockies of south eastern British Columbia, Canada. It is located west of the Continental Divide.

Lockhart Beach Provincial Park is a provincial park Located 40 km north of Creston, British Columbia, Canada, on BC Highway 3A. "This park and the adjacent Lockhart Creek Provincial Park extend 3 hectares, from the sunny shores of Kootenay Lake to the headwaters of Lockhart Creek. "This small park provides the only easy access to public camping along the south arm of Kootenay Lake. An 18 site campground and day use area are located near a sand and fine gravel beach where visitors can relax and enjoy the clear waters of Kootenay Lake."

Premier Lake Provincial Park is a provincial park near Sparwood, British Columbia, Canada. It is located on the south and western shores of Premier Lake in the East Kootenays, a small lake situated on the eastern flank of the Kootenay trench about 50 km north of Cranbrook. Also contained within the park are several smaller lakes, including Rockbluff (Quartz) Lake, Yankee Lake and Canuck Lake, all notable for the vivid green colour of their water.

The College of the Rockies is a Canadian public community college, located in the southeast corner of British Columbia, Canada. The main campus is in Cranbrook, with regional campuses in Creston, Fernie, Golden, Invermere, and Kimberley. Canada

The Shuswap Indian Reserve is a First Nations reserve in the Columbia Valley region of British Columbia, Canada, located on the left bank of the Columbia River one mile north of Invermere. The reserve is the home reserve of the Shuswap Indian Band, a band government of the Secwepemc (Shuswap) people and a member government of the Shuswap Nation Tribal Council and also of the Ktunaxa Kinbasket Tribal Council in alliance with nearby bands of the Ktunaxa people.

Jumbo Glacier, also known as Jumbo, is a mountain resort municipality within the Regional District of East Kootenay in southeast British Columbia, Canada. It is approximately 55 km (34 mi) west of Invermere near the Commander Glacier and around the headwaters of Jumbo Creek in the Purcell Range of the Columbia Mountains.

Columbia Lake Ecological Reserve is a nature reserve on Columbia Lake in the East Kootenay region of British Columbia, Canada, located on the east side of Columbia Lake just north of the village of Canal Flats.