Handan is a prefecture-level city located in the southwest of Hebei province, China. The southernmost prefecture-level city of the province, it borders Xingtai on the north, and the provinces of Shanxi on the west, Henan on the south and Shandong on the east. At the 2010 census, its population was 9,174,683 inhabitants whom 2,845,790 lived in the built-up (or metro) area made of 5 urban districts. Yongnian District in Handan and Shahe City in Xingtai have largely formed into a single conurbation.

Handan is one of the oldest cities in China, first settled in 6500 BC by the Cishan culture. Throughout the city's long history, it contributed significantly to Chinese culture, serving as the capital of State of Zhao, was northern China's political, economic and cultural center, and home to Tai chi and the first compass, made from stones collected in the nearby Mount Ci (magnet mountain). Handan is designated as one of China's National Famous Historical and Cultural Cities. [3] [4] [5] [6]

The city's name, Handan (Chinese: 邯 郸 ), has remained unchanged for over 2,000 years. The name first appeared during the reign of King Zhou of Shang, in the chronicle Bamboo Annals . [7]

A dictionary from the Tang dynasty explained that "Han" (Chinese: 邯 ) is the name of a nearby mountain (Hanshan), and "Dan" (Chinese: 单 ) meant "the terminus of a mountain" with an added radical (Chinese: 阝 ) denoting a city. Together, "Handan" means "the city at the terminus of Mount Han". This explanation has been widely accepted until the discoveries of jade writings in Houma, Shanxi in 1965, where the "Dan" in Handan was spelt "丹", meaning red. This then lead to another explanation that Handan was named so because Mount Han appeared reddish-purple in color. [7]

The different spellings of the city's name consolidated into the modern spelling in Qin dynasty. [7]

Handan, once well-defended from southern attack by a bend in the Zhang River, was a city of the state of Zhao during the Warring States Period (5th–3rd centuries BCE) of Chinese history. It was their second capital, after Zhongmu. King Wuling of Zhao turned Zhao into one of the Qin state's most stalwart foes, pioneering the use of walls to secure new frontiers (which would inspire the eventual construction of the Great Wall of China). The city was conquered by the State of Qin after the virtual annexation of Zhao by Qin except for the Dai Commandery. The first emperor of China, Qin Shi Huang was born in Handan, the child of a statesman from the state of Qin and after successfully conquering Zhao he ordered all enemies of his mother to be buried alive. The conquest of Zhao, particularly the Qin siege of Handan, is featured extensively in Chen Kaige's classic film, The Emperor and the Assassin .

At the beginning of the Han dynasty, Handan was Liu Bang's base for suppressing Chen Xi's rebellion in 197 and 196 BCE; it was still regarded as a regional center of culture and commerce at the end of the dynasty in the early 3rd century CE. It slowly declined, perhaps because of the numerous battles that ravaged northern China following the Han Dynasty, but maintained a reputation for its fine Cizhou ware well into the Qing dynasty (1644–1911). It was also the birthplace in the 19th century of Yang-style tai chi, one of Tai Chi's five major schools.

Though much of Handan's ancient history is no longer visible, it still has some attractions, deriving from the many Chinese idioms that the city inspired, [8] such as the road into which Lin Xiangru, courier of the precious Heshibi, backed in order to let his nemesis Lian Po pass first, as well as the location in which Lian Po begged for Lin Xiangru's forgiveness. Modern-day Congtai Park is located on the site of the historical Zhao court. Next to Congtai Park is the legendary "Xuebu Bridge" (学步桥), or "Learning to Walk Bridge". Legend has it that a noble from the state of Yan heard of a particularly elegant manner of walking unique to Handan. Arriving in Handan, he spent weeks trying to master the Handan style of walking on a bridge, only to fail. In the process, however, he had forgotten how to walk normally and had to crawl back to Yan. This story inspired the Chinese expression, "to learn the walk of Handan" (邯郸学步, Hándān xué bù), which means learning something difficult too intensely, thereby forgetting the basics in the process. [9]

The nearby Xiangtangshan Caves contain massive Buddha statues carved into the mountainside, some dating to the 6th century, many of which were severely damaged by invading Japanese forces during World War II. At that time, Handan was prized by the Japanese invaders for its coal reserves.

In 2007, Handan was the location of China's largest-ever bank robbery.

The municipal executive, legislative and judiciary are situated in Congtai District (丛台区, Cóngtái Qū), as well as the CPC and Public Security bureaux.

Handan has witnessed rapid growth over the past 20 years. Industrial growth in the city has focused on communication and transport activities. Handan is a major producer of coal and steel, with Coal mines at Fengfeng providing power for Handan's iron, steel and textile mills. Chemical and cement plants along with other industries also benefit. Local agriculture produces maize, pomegranates and eggs. [11] Handan also has a growing services sector, with retail, banking and trading making up 40% of the economy. [12] The GDP per capita in Renminbi was estimated at ¥13,449 in 2005. In 2015, the figure was ￥33,554.87.

According to a survey by "Global voices China" in February 2013, Handan was one of China's most polluted cities due to heavy industrial outputs. [13]

However the government has made a significant effort to make the city cleaner, which involved closing down many polluting power plants. It is no longer the most polluted city, and, according to a 2016 government survey, the number of good air quality days is 189 days, an increase of 135 days compared with 2013. [14]

According to Handan government in 2007, 40 ethnic groups were present in Handan. Ethnic minorities represent 50,000 people, among which 48,000 Hui. There are 22 Hui schools and 5 Hui junior high schools in Handan. [15]

The most widespread religion in Handan is Chinese folk religion, including Taoism and Buddhism.

In 2013, there were more than 150,000 Catholics in Handan according to the Catholic Church, in the Roman Catholic Diocese of Yongnian. [16] Mother of Grace Cathedral in Daming County was built in 1918. The most recent church was built in 2007. [17]

According to the local government 30,000 Hui Muslims live in the prefecture of Handan. [21]

Handan is hailed as the capital of Chinese idioms. [22] As a prosperous city and cultural center during the Warring States period, Handan attracted many scholars. Over 1,500 idioms and proverbs are attributed to the city. [8] The following are some of the most well known idioms.

Wu'an is a county-level city in the southwest of Hebei Province, China, bordering Shanxi Province to the west. It is under the administration of the prefecture-level city of Handan.

The Roman Catholic Diocese of Yongnian/Weixian is a diocese located in the city of Yongnian in the Ecclesiastical province of Beijing in China.

Handan County was a county of Hebei, China, under the administration of the prefecture-level city of the same name.

She County, or Shexian, is a county of southwestern Hebei Province, China, located on the lower reaches of the Zhang River and bordering Shanxi to the west and Henan to the south. It is under the administration of the Handan City, with a population of 400,000 residing in an area of 1,509 km2 (583 sq mi).

Yongnian is an urban district of the city of Handan, Hebei province, China. It is the seat of the Roman Catholic Diocese of Yongnian.

Qiu County or Qiuxian is a county in the south of Hebei province, China. It is under the administration of Handan City.

Wei County or Weixian is a county in the south of Hebei province, China, bordering Henan province to the south. It is under the administration of the prefecture-level city of Handan.

Fengfeng Mining District is a district of the city of Handan, Hebei, People's Republic of China. 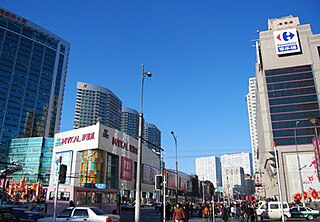 Handan Airport, also known as Handan Matou Airport or Handan Nanjiao Airport, is an airport serving the city of Handan in Hebei Province, China. It is located 11 kilometers southwest of Handan, and 43 kilometers north of the city of Anyang in neighboring Henan Province. The airport was opened in August 2007 and is now undergoing a 120 million yuan expansion. 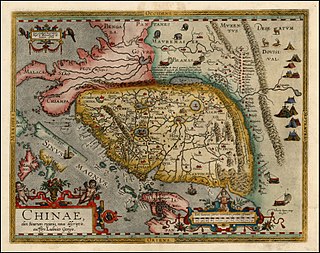 Tiger-head shoes are an example of traditional Chinese folk handicraft used as footwear for children. Their name comes from the toe cap, which looks like the head of a tiger. In the North of China, people also call them cat-head shoes. In Chinese culture, tigers are regarded as auspicious; people embroider the head and the upper of the shoes with tiger or tiger-head patterns, in the hope that their children will become as robust and dynamic as tigers. Also, the vivid image of tiger-head pattern was thought to expel evil spirits to protect their children from diseases and disasters. It is a complicated work to make tiger-head shoes, there are many delicate stitch work such as embroidery, or weaving simply on the head of the shoes. The vamp is mainly colored in red and yellow, and residents usually use thick lines to draw the outline of the mouth, eyebrow, nose and the eyes of the tiger to express its power in an exaggerated way.

The Changsha Church Christianity is a 20th-century Chinese traditional architecture church. It is located in the Xiangchun Street, Kaifu District of Changsha, Hunan, China.

The Beizhengjie Christ Church is a 20th-century typical gothic church. It is located in the Huangxing North Road of Changsha, Hunan province, China. 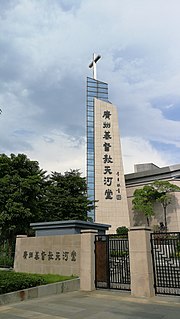 Christian Church of Guangzhou Tianhe, also known as Tianhe Church (天河堂), is a Christian TSPM Church in Guangzhou, China. It is located at No. 16-20 Daguan Middle Road, Tianhe District, and hence its name. It is considered the largest church in Guangzhou.

Mao Sui, was born in the Zhao state during the Warring States period. He was a retainer of Lord Pingyuan, namely Zhao Sheng. Mao lived in Zhao for three years but success eluded him. In 257 BC, after the Battle of Changping, Zhao refused to cede territory to the Qin. As a result, Qin attacked Handan, the capital of Zhao. On its part, Zhao sought assistance from the Chu state. Mao Sui recommended himself to the Chu State and was successful in persuading the Chu to assist Zhao. In return, Mao Sui gained fame, and it was widely believed that: "A good tongue of Mao Sui is stronger than a million soldiers."

Joseph Sun Jigen is a Chinese Catholic priest and Coadjutor bishop of the Roman Catholic Diocese of Yongnian from 2011.

Joseph Cui Shouxun was a Chinese Catholic priest and Bishop of the Roman Catholic Diocese of Yongnian between 1929 and 1953.