Gaj's Latin alphabet (Serbo-Croatian : abeceda, latinica, gajica) [1] is the form of the Latin script used for writing Serbo-Croatian and all of its standard varieties: Bosnian, Croatian, Serbian, and Montenegrin.

The alphabet was initially devised by Croatian linguist Ljudevit Gaj in 1835 during the Illyrian movement in ethnically Croatian parts of Austrian Empire. It was largely based on Jan Hus's Czech alphabet and was meant to serve as a unified orthography for three Croat-populated kingdoms within the Austrian Empire at the time, namely Croatia, Dalmatia and Slavonia, and their three dialect groups, Kajkavian, Chakavian and Shtokavian, which historically utilized different spelling rules.

A slightly modified version of it was later adopted as the formal Latin writing system for the unified Serbo-Croatian standard language per the Vienna Literary Agreement. It served as one of the official scripts in the unified South Slavic state of Yugoslavia.

The alphabet consists of thirty upper and lower case letters:

The letters do not have names, and consonants are normally pronounced as such when spelling is necessary (or followed by a short schwa, e.g. /fə/). When clarity is needed, they are pronounced similar to the German alphabet: a, be, ce, če, će, de, dže, đe, e, ef, ge, ha, i, je, ka, el, elj, em, en, enj, o, pe, er, es, eš, te, u, ve, ze, že. These rules for pronunciation of individual letters are common as far as the 22 letters that match the ISO basic Latin alphabet are concerned. The use of others is mostly limited to the context of linguistics, [2] [3] while in mathematics, ⟨j⟩ is commonly pronounced jot, as in German. The missing four letters are pronounced as follows: ⟨q⟩ as ku or kju, ⟨w⟩ as dublve, duplo v or duplo ve, ⟨x⟩ as iks, ⟨y⟩ as ipsilon.

Note that the digraphs dž, lj, and nj are considered to be single letters:

The Croatian Latin alphabet was mostly designed by Ljudevit Gaj, who modelled it after Czech (č, ž, š) and Polish (ć), and invented ⟨lj⟩, ⟨nj⟩ and ⟨dž⟩, according to similar solutions in Hungarian (ly, ny and dzs, although dž combinations exist also in Czech and Polish). In 1830 in Buda, he published the book Kratka osnova horvatsko-slavenskog pravopisanja ("Brief basics of the Croatian-Slavonic orthography"), which was the first common Croatian orthography book. It was not the first ever Croatian orthography work, as it was preceded by works of Rajmund Đamanjić (1639), Ignjat Đurđević and Pavao Ritter Vitezović. Croats had previously used the Latin script, but some of the specific sounds were not uniformly represented. Versions of the Hungarian alphabet were most commonly used, but others were too, in an often confused, inconsistent fashion.

Gaj followed the example of Pavao Ritter Vitezović and the Czech orthography, making one letter of the Latin script for each sound in the language. Following Vuk Karadžić's reform of Cyrillic in the early nineteenth century, in the 1830s Ljudevit Gaj did the same for latinica, using the Czech system and producing a one-to-one grapheme-phoneme correlation between the Cyrillic and Latin orthographies, resulting in a parallel system. [4]

In the 1990s, there was a general confusion about the proper character encoding to use to write text in Latin Croatian on computers.

The preferred character encoding for Croatian today is either the ISO 8859-2, or the Unicode encoding UTF-8 (with two bytes or 16 bits necessary to use the letters with diacritics). However, as of 2010 [update] , one can still find programs as well as databases that use CP1250, CP852 or even CROSCII.

Digraphs ⟨dž⟩, ⟨lj⟩ and ⟨nj⟩ in their upper case, title case and lower case forms have dedicated UNICODE code points as shown in the table below, However, these are included chiefly for backwards compatibility (with legacy encodings which kept a one-to-one correspondence with Cyrillic); modern texts use a sequence of characters.

Since the early 1840s, Gaj's alphabet was increasingly used for the Slovene language. In the beginning, it was most commonly used by Slovene authors who treated Slovene as a variant of Serbo-Croatian (such as Stanko Vraz), but it was later accepted by a large spectrum of Slovene-writing authors. The breakthrough came in 1845, when the Slovene conservative leader Janez Bleiweis started using Gaj's script in his journal Kmetijske in rokodelske novice ("Agricultural and Artisan News"), which was read by a wide public in the countryside. By 1850, Gaj's alphabet (known as gajica in Slovene) became the only official Slovene alphabet, replacing three other writing systems that had circulated in the Slovene Lands since the 1830s: the traditional bohoričica , named after Adam Bohorič, who codified it; the dajnčica , named after Peter Dajnko; and the metelčica , named after Franc Serafin Metelko.

The Slovene version of Gaj's alphabet differs from the Serbo-Croatian one in several ways:

As in Serbo-Croatian, Slovene orthography does not make use of diacritics to mark accent in words in regular writing, but headwords in dictionaries are given with them to account for homographs. For instance, letter ⟨e⟩ can be pronounced in four ways (/eː/, /ɛ/, /ɛː/ and /ə/), and letter ⟨v⟩ in two ([ʋ] and [w], though the difference is not phonemic). Also, it does not reflect consonant voicing assimilation: compare e.g. Slovene ⟨odpad⟩ and Serbo-Croatian ⟨otpad⟩ ('junkyard', 'waste').

Romanization of Macedonian is done according to Gaj's Latin alphabet [6] [7] but is slightly modified. Gaj's ć and đ are not used at all, with ḱ and ǵ introduced instead. The rest of the letters of the alphabet are used to represent the equivalent Cyrillic letters. Also, Macedonian uses the letter dz, which is not part of the Serbo-Croatian phonemic inventory. However, the backs of record sleeves published in the former Yugoslavia, by non-Macedonian publishers, (such as Mizar's debut album) used ć and đ, like other places.

Serbian is the standardized variety of the Serbo-Croatian language mainly used by Serbs. It is the official and national language of Serbia, one of the three official languages of Bosnia and Herzegovina and co-official in Montenegro, where it is spoken by the relative majority of the population. It is a recognized minority language in Croatia, North Macedonia, Romania, Hungary, Slovakia, and the Czech Republic.

The Slovene alphabet is an extension of the Latin script and is used in the Slovene language. The standard language uses a Latin alphabet which is a slight modification of the Croatian Gaj's Latin alphabet, consisting of 25 lower- and upper-case letters: 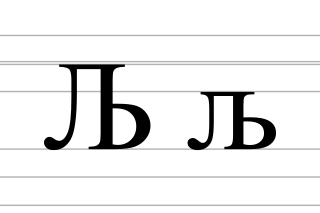 Lje is a letter of the Cyrillic script.

Dzhe or Gea is a letter of the Cyrillic script used in Macedonian and varieties of Serbo-Croatian to represent the voiced postalveolar affricate, like the pronunciation of j in “jump”.

Ljudevit Gaj was a Croatian linguist, politician, journalist and writer. He was one of the central figures of the pan-Slavist Illyrian Movement.

Lj is a letter present in some Slavic languages, such as the Latin version of Serbo-Croatian and in romanised Macedonian, where it represents a palatal lateral approximant. For example, the word ljiljan is pronounced. Most languages containing the letter <Lj> in the alphabet are phonemic, which means that every symbol represents one sound, and is always pronounced the same way. In this case, joining the letters L and J creates a new letter or a sound. The digraph is treated as a single letter, and therefore it has its own place in the alphabet, takes up only one space in crossword puzzles and is written in line in vertical text. However, it is not found on standard computer keyboards. Like its Latin counterpart, the Cyrillic alphabet has a specific symbol for the same sound: Љ.

The Illyrian movement was a pan-South-Slavist cultural and political campaign with roots in the early modern period, and revived by a group of young Croatian intellectuals during the first half of the 19th century, around the years of 1835–1863. This movement aimed to create a Croatian national establishment in Austria-Hungary through linguistic and ethnic unity, and through it lay the foundation for cultural and linguistic unification of all South Slavs under the revived umbrella term Illyrian.

Nj is a letter present in South Slavic languages such as the Latin-alphabet version of Serbo-Croatian and in romanised Macedonian. It is also used in the Albanian alphabet. In all of these languages, it represents the palatal nasal. It is pronounced as Dom Pérignon. For example, the Croatian and Serbian word konj is pronounced.

Đ, known as crossed D or dyet, is a letter formed from the base character D/d overlaid with a crossbar. Crossing was used to create eth (ð), but eth has an uncial as its base whereas đ is based on the straight-backed roman d. Crossed d is a letter in the alphabets of several languages and is used in linguistics as a phonetic symbol.

YUSCII is an informal name for several JUS standards for 7-bit character encoding. These include:

The Serbian Cyrillic alphabet is an adaptation of the Cyrillic script for the Serbian language, developed in 1818 by Serbian linguist Vuk Karadžić. It is one of the two alphabets used to write standard modern Serbian, Bosnian and Montenegrin varieties of Serbo-Croatian language, the other being Latin. 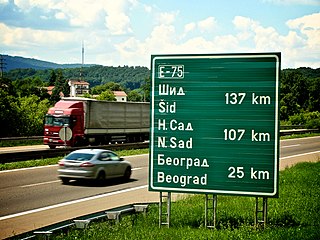