The 1880s was a decade that began on January 1, 1880, and ended on December 31, 1889. The decade occurred at the core period of the Second Industrial Revolution. The modern city as well as the sky-scraper rose to prominence in this decade as well, contributing to the economic prosperity of the time. The 1880s were also part of the Gilded Age, in the United States, which lasted from 1874 to 1907.

George Westinghouse Jr. was an American entrepreneur and engineer based in Pennsylvania who invented the railway air brake and was a pioneer of the electrical industry, gaining his first patent at the age of 19. Westinghouse saw the potential in alternating current as an electricity distribution system in the early 1880s and put all his resources into developing and marketing it, a move that put his business in direct competition with the Edison direct current system. In 1911 Westinghouse received the AIEE's Edison Medal "For meritorious achievement in connection with the development of the alternating current system."

Ottó Titusz Bláthy was a Hungarian electrical engineer. In his career, he became the co-inventor of the modern electric transformer, the tension regulator, the AC watt-hour meter.motor capacitor for the single-phase (AC) electric motor, the turbo generator, and the high-efficiency turbo generator. 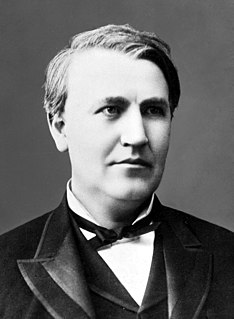 The war of the currents, sometimes called battle of the currents, was a series of events surrounding the introduction of competing electric power transmission systems in the late 1880s and early 1890s. It grew out of two lighting systems developed in the late 1870s and early 1880s; arc lamp street lighting running on high-voltage alternating current (AC), and large-scale low-voltage direct current (DC) indoor incandescent lighting being marketed by Thomas Edison's company. In 1886, the Edison system was faced with new competition: an alternating current system developed by George Westinghouse's company that used transformers to step down from a high voltage so AC could be used for indoor lighting. Using high voltage allowed an AC system to transmit power over longer distances from more efficient large central generating stations. As the use of AC spread rapidly, the Edison Electric Light Company claimed in early 1888 that high voltages used in an alternating current system were hazardous, and that the design was inferior to, and infringed on the patents behind, their direct current system. 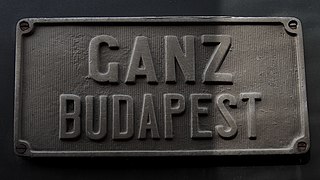 The Ganz Works or Ganz was a group of companies operating between 1845 and 1949 in Budapest, Hungary. It was named after Ábrahám Ganz, the founder and the manager of the company. It is probably best known for the manufacture of tramcars, but was also a pioneer in the application of three-phase alternating current to electric railways. Ganz also made ships, bridge steel structures and high-voltage equipment. In the early 20th century the company experienced its heyday, it became the third largest industrial enterprise in Kingdom of Hungary after the Manfréd Weiss Steel and Metal Works and the MÁVAG company. Since 1989, various parts of Ganz have been taken over by other companies.

Gustave Pierre Trouvé was a French electrical engineer and inventor in the 19th century.

Moritz Immisch was an Electrical engineer, watchmaker and inventor.

Philip H. Diehl was a German-American mechanical engineer and inventor who held several U.S. patents, including electric incandescent lamps, electric motors for sewing machines and other uses, and ceiling fans. Diehl was a contemporary of Thomas Edison and his inventions caused Edison to reduce the price of his incandescent bulb.

John Dixon Gibbs (1834–1912) was a British engineer and financier who, together with Lucien Gaulard, is often credited as the co-inventor of the AC step-down transformer. The transformer was first demonstrated in 1883 at London's Royal Aquarium. At the time the term "transformer" had not yet been invented, so instead it was referred to as a "secondary generator". Although he is usually credited equally with Gaulard, Gibb's role in the invention appears to have been more that of a financial backer and businessman.