This is a list of major football stadiums, grouped by country and ordered by capacity. It does not include American Football stadiums in the USA that are also used for association football.

Note that many of the Australian stadiums are multi-purpose venues. Of those listed, only Coopers Stadium in Adelaide, South Australia is a soccer-specific venue.

Main article: List of football stadiums in Bosnia and Herzegovina

Main article: List of football stadiums in the Czech Republic

Main article: List of association football stadiums in the Republic of Ireland

Main article: List of football stadiums in the Netherlands

Main article: List of football stadiums in the Philippines

The following is a list of stadiums in South Africa, ordered by capacity. Currently all stadiums with a capacity of 30,000 or more are included.

Main article: List of stadiums in Wales by capacity

Main article: List of soccer stadiums in the United States

Club Atlético 3 de Febrero is a professional Paraguayan football club from Ciudad del Este, the capital city of the department of Alto Paraná. The club was founded in 1970, and named after St. Blaise Day, a national holiday throughout many Hispanic countries. 3 de Febrero have played 9 seasons in the Primera División Paraguaya. At present plays in the Second Division of the Paraguayan league.

General Caballero SC is an association football club from Zeballos Cué, Asunción, Paraguay. The club was founded September 6, 1918 and plays in the Primera División B, the third division of the Paraguayan football league. Their home games are played at the Estadio Hugo Bogado Vaceque which has a capacity of approximately 5,000 seats.

The Estadio Cuscatlán is a football stadium located in San Salvador, El Salvador. It is the largest stadium in Central America with a capacity of 53,400. The stadium is the home ground of the El Salvador national football team and Alianza F.C.

Estadio Antonio Aranda, known until 2013 as Estadio Tte. Cnel. Antonio Oddone Sarubbi, is a football stadium in the city of Ciudad del Este, Paraguay. It is the home venue of Club Atlético 3 de Febrero and is named after Antonio Aranda Encina, a former club executive who contributed to the stadium's construction through his enterprise Eventos y Construcciones, and also to 3 de Febrero's first promotion to the first division in 2004.

Estadio Polideportivo Sur is a multi-purpose stadium in Envigado, Colombia that is currently used mostly for football matches. The stadium has a capacity of 11,000 people and was built in 1992. Envigado FC play their home matches at this stadium.

Estadio José Alberto Pérez is a multi-use stadium in Valera, Venezuela. It is currently used mostly for football matches and is the home stadium of Trujillanos Fútbol Club. The stadium holds 25,000 people. It was constructed in 1976. The stadium was renovated in 2005 by the National Institute of Sports of Venezuela and the state government of Trujillo, renovating the stands, pitch and the amenities area. 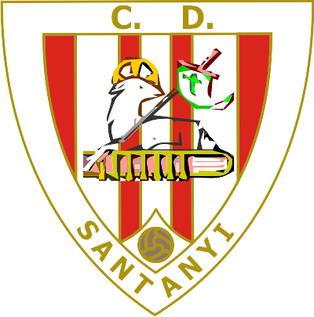 Club Deportivo Santanyí is a football team based in Santanyí in the autonomous community of Balearic Islands. Founded in 1968, it plays in the Tercera División - Group 11. Its stadium is Estadi Municipal de Santanyí with a capacity of 4,000 seats.

Club de Fútbol Ardoi Fútbol Elkartea is a Spanish football team based in Zizur Mayor in the autonomous community of Navarre. Founded in 1993, it plays in Tercera División – Group 15. Its stadium is Estadio El Pinar II with a capacity of 1,000 seaters. 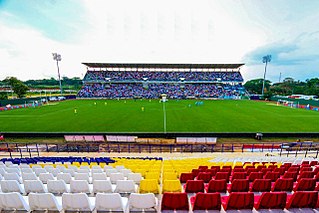 Estadio Jaraguay is a multi-use stadium in Montería, Colombia. It is currently used mostly for football matches. The stadium was built in 2012 for the National Games of Colombia, with a capacity of 8,000 people, which was raised by 4,000 seats in 2017 with the construction of a new grandstand. Jaguares de Córdoba play their home matches at this stadium. In December 2015, the stadium was renamed to Jaraguay after the name was chosen from a list provided by citizens in a contest organized through the website of the Municipality of Montería. Jaraguay was a Zenú Cacique who ruled in what is now Montería.